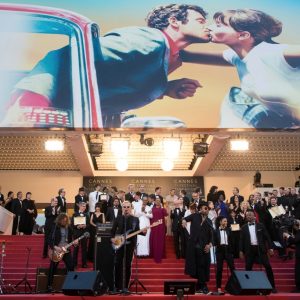 This brilliant achievement has renewed the appeal of Japanese film.

Director Kore-eda, who regularly enters films in the competition at Cannes, was quoted as saying, “My legs are trembling” at achieving this highest honor in the world of film. He went on to say, “I want to share the courage and hope that I have received with my staff and the film’s cast, as well as with young movie directors.”

Hopefully this win will provide momentum to further invigorate the Japanese film industry, including the development of the next generation of young filmmakers.

Past Japanese winners included such masters as director Teinosuke Kinugasa, for the film Gate of Hell (1953); director Akira Kurosawa for Kagemusha (1980); and director Shohei Imamura for The Ballad of Narayama (1983) and The Eel (1997).

Kore-eda’s works examine the modern way of life through the lens of families struggling with their own problems. Shoplifters depicts a household that relies on the mother’s pension and shoplifts items that they cannot afford.

In addition to the appeal of the screenplay, which the director wrote himself, the film was notable for the director’s striking ability to draw out fine performances from the children and actors that portray three generations of family members, including Lily Franky and Kirin Kiki, among other elements.

The actress Cate Blanchett, who was president of the jury for the 2018 festival, rated the film highly, saying, “We were completely bowled over by how intermeshed the performances were with the director’s vision.”

The film impressed the rest of the world with the power and depth of Japanese cinema, not only evoking an interest in ancient Japanese culture, but achieving recognition for its message, which tackles the universal theme of family.

The Japanese film industry has long been considered to be on the decline, but there were signs of a resurgence the year before last with big hits such as Shin Godzilla (2016) and Your Name (2016).

On the other hand, box office revenue undeniably relies on animation and Hollywood blockbusters. Yet, there are also fans who are not satisfied by the current state of film in which movies based on comics are prominent.

Although blockbusters remain essential from the perspective of revenue, it is also important to expand the opportunities to discover, develop, and showcase talent with the drive to produce works of more depth.

Many Japanese filmmakers have received high praise at international film festivals for their work, including for short films and documentaries. However, it is difficult to raise funds to produce the films, and works even by these directors have limited opportunities for screening at theaters.

Movie fans who enjoy diverse works are the emissaries who spread the appeal of the films.

Japan has a large budget to showcase its culture through “Cool Japan,” and an effective way must be found to include Japanese filmmaking among its investments.