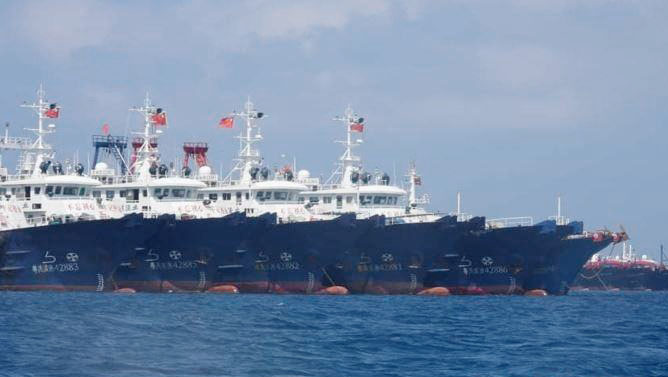 A Chinese fishing fleet believed to be part of China’s maritime militia has swarmed near one of the hotly contested reefs in the Spratly Islands in the South China Sea and built structures on the reef, the Philippine military revealed on March 30.

The location in question is Whitsun Reef, about 320 kilometers (175 nautical miles) west of the Philippine province of Palawan. The reef is within the Philippines’ 200-nautical mile exclusive economic zone (EEZ).

China has already transformed seven reefs into artificial islands in the Spratly Islands, claiming sovereignty over all of them. While China’s claims are in clear violation of international law, fears are rising that the structures near Whitsun Reef could possibly lead to construction of an eighth artificial island.

Neither the building activities nor the structures are acceptable. The Chinese fleet should be recalled from Whitsun Reef immediately and the reef restored to its original state.

In early March a flotilla of about 220 Chinese boats thronged to waters near the reef and anchored in line formation, presenting a bizarre image which some Philippine media referred to as the “Great Wall of the Sea.” The Philippine military announced on March 30 that “illegal structures” had been discovered by its aerial surveillance.

Philippine Defense Secretary Delfin Lorenzana accused the Chinese on March 21 of a “clear provocative action of militarizing the area,” repeating calls for Beijing to withdraw the vessels. The Philippine government believes China’s maritime militia are aboard the ships.

The Chinese government denied the presence of maritime militia, maintaining that the fishing boats were simply seeking shelter due to rough weather conditions. However, the large number of Chinese fishing vessels that remained at the reef after the weather improved and the structures found to have been built there leave no doubt that China’s claims were filled with falsehoods.

In July 2016, the Permanent Court of Arbitration in the Hague ruled that China’s claim of sovereignty over almost the entirety of the South China Sea and its artificial island construction activities in the region were both illegal under the United Nations Convention on the Law of the Sea (UNCLOS).

RELATED: EDITORIAL | Like a Looter at a Fire, Beijing Encroaches on the South China Sea Amid the Pandemic

A reef that is submerged at high tide cannot produce territorial rights to any country in the eyes of UNCLOS. Regardless of the acts a country may take to reclaim land for an artificial island, it will not be viewed as part of that country’s territory.

Nevertheless, China has dared to set up administrative districts over such islands, building military installations such as runways there. Yet, China’s use of military power to disrupt the existing rules-based order under international law can never be permissible.

It should be pointed out that China’s provocations in the Spratly Islands have also been directed towards Japan, the United States, and the international community as a whole. The South China Sea is a vitally important waterway for both international commerce and security, and it must be restored to a “free and open sea.”

The Chinese government is paying particular attention to the reactions of the United States administration of President Joe Biden. To deter China from perpetrating further outrageous acts, Japan and the United States must not ignore Beijing’s illegal conduct at Whitsun Reef.