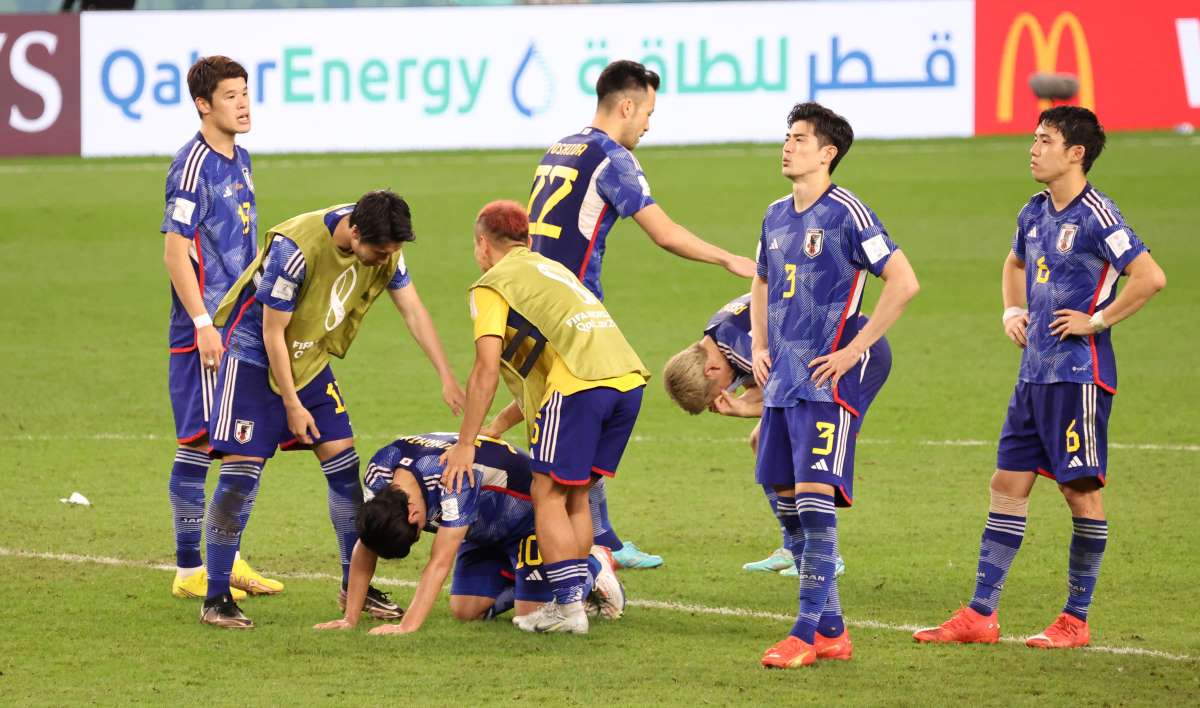 Japan's national team is dejected after losing to Croatia in a penalty shootout at Al Janoub Stadium at the 2022 FIFA World Cup. (© Sankei by Satoshi Muramoto)

Japan's soccer team has proved to be one of the stars in the early stages of the 2022 FIFA World Cup in Qatar. Incredible come-from-behind victories by the feisty Japanese team over soccer powerhouses Germany and Spain in the preliminary round shocked the world and thrilled fans.

The New York Times praised its efforts, declaring that no other team had brought as much excitement and energy to the competition.

Manager Hajime Moriyasu and team members had said that they were determined to "see new vistas" by advancing Japan to the final eight for the first time ever. However, that was not to be, as Japan fell to Croatia in a penalty shootout during their round of 16  match.

For the fourth time Japan tried to scale the barrier to entering the promised land of the quarterfinals, but failed in the attempt.

Croatia was a formidable opponent to be sure. It reached the championship match against France during the 2018 World Cup in Russia after surviving two earlier matches that had to be settled by penalty kicks.

Winger Kaoru Mitoma was left in tears by the loss. He lamented, "We didn't have enough of everything." Many members of the Samurai Blue used the same expression: "We lacked spirit."

Wataru Endo, a key player on both offense and defense, said, "This frustration will serve as the springboard for our preparations for the next World Cup, beginning tomorrow."

The fact that the players one and all are not content to be consoled by the phrase "thank you for the inspiration" is evidence of their new hopes for the future.

The 2022 FIFA World Cup has been unusual in several respects. Not only is it the first World Cup to be staged in the Middle East, it is also the first to be held in the autumn or winter.

However, the factor that has had the greatest impact on the matches has to be the increase in the number of player substitutions allowed. The rules went from three to allowing five (six if a match goes into overtime).

Moriyasu made good use of the rule change during the match with Germany. During the second half he first switched to an ultra-defensive lineup to stabilize the tenor of the game.

Next, he quickly introduced offensive players, which allowed Japan to turn the game around. Then, during the match with Spain, as soon as the second half got underway, he went with an attack-oriented lineup. He turned the tables on Spain, before starting to insert defensive players in order to seal the come-from-behind victory.

Foreign media outlets took to praising his leadership, calling it "Moriyasu magic." On the other hand, even if a manager's strategy is correct, that might not necessarily translate into victory on the pitch.

'Thank You For Your Inspiration'

Coolly dissecting what went on in the matches with both Germany and Spain shows that Japan's opponents controlled the ball for most of the time. Moriyasu's leadership certainly gave his players rare opportunities, which, thanks to their concentration, they managed to turn into a victory.

Nonetheless, we should admit that the 2022 FIFA World Cup has clearly demonstrated how difficult it is to make it to the top eight ー and beyond ー if your team cannot match up evenly with opponents throughout the tournament. Nobody knows that better than the athletes themselves.

With all that said, all the Japanese players and staff deserve hearty thanks for their hard work throughout a truly tough schedule.

Although the athletes might feel compelled to cover their ears, we dare to say, "Thank you for the inspiration."

And may you bring us more joy four years from now.