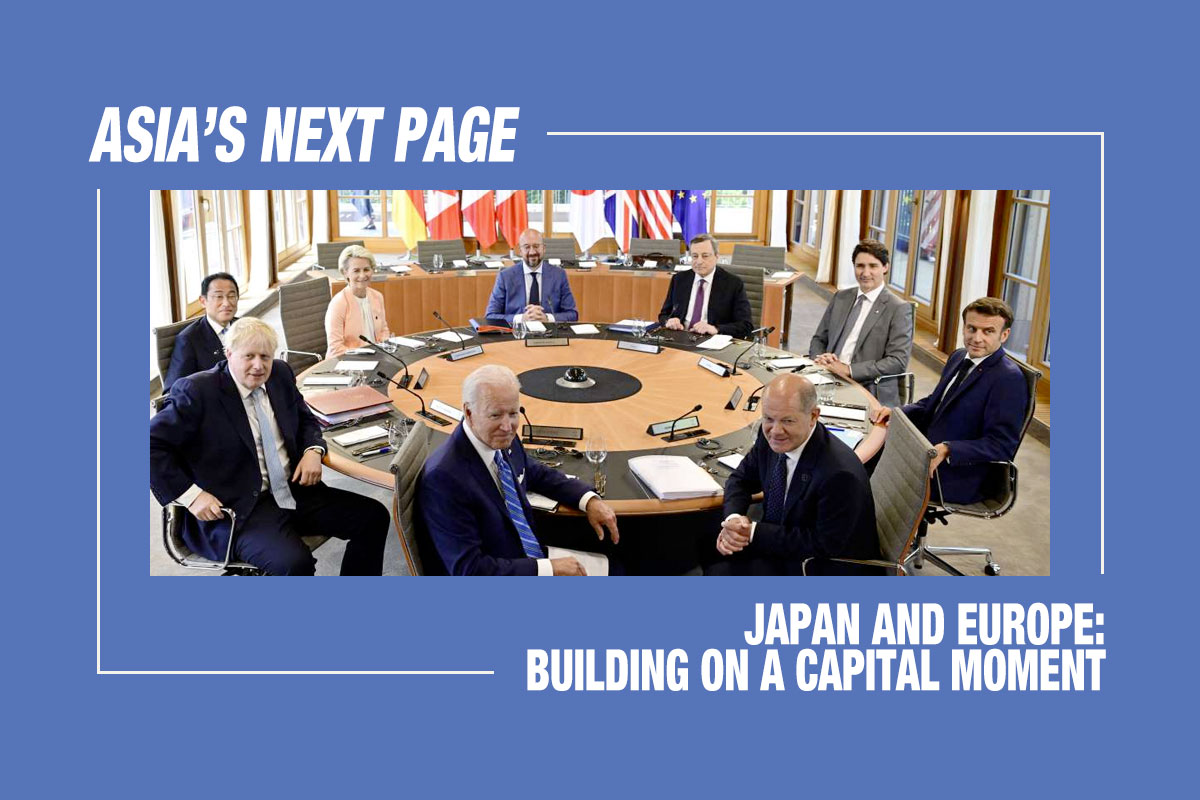 For decades, Japan and Europe defined their "natural" partnership based on universal values of freedom, democracy, and the rule of law in deference to ties with other partners.

The differences in their perceptions of China's rise mark their political differences. Europe's tilt is to China versus Japan's hardline realist approach. Tokyo's exceptional focus on the United States adds to the contrast.

However, the ascent of the Donald Trump administration, with its "America First" protectionist policies and disregard for internationalism, changed Europe's dynamics. Growing uneasiness in Europe about China's dubious role as a strategic competitor also played a role with its views on the Indo-Pacific. And in turn affected its perspectives on the Japan and Europe calculus.

In recent years, Japan's ties with Europe have made tremendous strides in strategic, economic, and digital spheres. Initiatives facilitating these ties have been such as the 2019 European Union (EU)-Japan Economic Partnership Agreement (EPA), 2019 Partnership on Sustainable Connectivity and Quality Infrastructure, 2021 EU-Japan Green Alliance, and 2022 Japan-EU Digital Partnership.

Moreover, Europe's large embrace of the "free and open Indo-Pacific" construct has been boosted by the common recognition of China as a strategic challenge. Europe and Japan have embraced multiple strategies, engaging the EU, France, Germany, the Netherlands, the Czech Republic and the United Kingdom ー a former EU member ー amid a need to protect common interests and the global order.

Such burgeoning cooperation has strengthened the liberal order. In addition, though, it has acted as a balance against overdependence on major powers, namely the US and China. This cooperation also lends support to global responsibility-sharing, encouraging other middle powers to coalesce, too, for the greater global public good.

Japan and Europe: Security as a Frontline Matter

On the security front, Japan's ties with Europe including the North Atlantic Treaty Organization (NATO) have taken on momentum. Japan-NATO ties particularly have come a long way since the 1990s, when there was no consensus among members for strengthening relations with Japan. Today, Japan is the main Western ally/bulwark in the Indo-Pacific.

For Japan, the growing partnership with NATO, including Europe and the EU, serves multiple goals. It ensures national security imperatives in its fragile neighborhood against a trigger happy North Korea and a revisionist China. And it allows a greater say in Western global security policy. Greater access to Europe's resources is facilitated, including those in the Central, Eastern, and Arctic regions.

Notwithstanding the growth in ties, Japan has tended to under exploit the potential accorded by the shifting balance of power. Asia has risen as the geo-economic and geopolitical center of gravity, and regional interdependence has grown.

In the past year, the Russian invasion of Ukraine has certainly accelerated Japan's move toward Europe. Two major reasons have been China's fall from grace as an unapologetic supporter of Russia, and Japan's increasing credibility as a responsible global power. Japan has demonstrated unequivocal support of the West-led sanctions on Russia. Tokyo's humanitarian and (non-lethal) military aid to Ukraine, too, has caught the attention of Europe.

Japan and Europe share the same perspective of the war and have been impressed by each other's responses. This opens the potential for a new phase of security relations. Being like-minded partners with similar outlooks, they could harness their converging interests in upholding the rules-based order to reinforce their mutual objectives.

As such, Ukraine has also been a wake-up call for Japan, leading to notable policy. Among them, ending the appeasement of Russia by labeling the disputed Northern Territories as "illegally occupied." In addition, Japan is catalyzing an increase in defense spending, monitoring Taiwan with a "sense of crisis," reaching out to South Korea, and toughening its stance on China.

Japan is no longer content to be on the periphery of global crises. And Prime Minister Fumio Kishida's shift to "new-era realism diplomacy" post the Ukraine invasion is evidence of Japan's fears for the Indo-Pacific. (Kishida famously said, "East Asia is the Ukraine of tomorrow.") Europe would provide Japan with resilience and reinforcement, especially within multilateral forums, if they were aligned closely.

For such purposes, Tokyo must capitalize on Europe's geoeconomic and geopolitical ambitions in the Indo-Pacific, i.e., trade and strategic autonomy). Japan must project itself as a credible and reliable entry point to the region.

This becomes more significant in the wake of Europe's growing recognition of China as a disrupter of the liberal world order and unbridgeable differences over China's poor human rights record. Japan and Europe, however, still recognize China's importance as a trade partner.

Therefore, it is reasonable to contend that Chinese assertiveness is driving European and Japanese rapprochement. Both Tokyo and Europe have been at the receiving end of Beijing's economic coercion. Thus, both are looking to cooperate on strengthening supply chain resilience, energy security, trade opportunities, and effective economic multilateralism.

As such, building on the Japan-EU Economic Partnership Agreement will be a way to expand the reach of economic diplomacy. Japan's 2023 G7 presidency will no doubt be another shot in the arm for Europe-Japan ties.

The main lacunae appear in Japan's not-so impressive engagement with Central and Eastern Europe (CEE) as well as the Nordic states. The CEE appears stuck between a rock and a hard place due to Russian historic claims and Chinese foothold via the controversial, debt-inducing (no longer attractive) Belt and Road Initiative (BRI) projects. Hence, Japan's attention in the post-Soviet collapse through development aid for reform efforts is no longer enough.

The convergence of Japan's free and open Indo-Pacific with the EU Global Gateway and G7's Build Back Better World could provide important headway into the CEE quality infrastructure connectivity and for Japanese investment opportunities. Blurring geographical boundaries and highlighting potential security cooperation, Japan has also been looking to the CEE (part of China's slowly dissipating "16+1" framework, down to 14+1 as of August) to seek support on China's maritime expansion in the Indo-Pacific. Such actions would in turn help the EU in balancing both China and Russia in the CEE.

Japan and Europe Attention to the Arctic

Similarly, Japan's outreach to the Nordic states is vital because of the growing geostrategic attention to the Arctic. This is perhaps the last remaining untapped frontier of rich natural resources.

Climate change and increasing international attention for claims to the region have brought about security and environmental concerns to the forefront. Japan's efforts into Arctic research and joint actions like the ban on extensive fishing in the region will have to be supplemented with a more exhaustive Arctic policy.

Of concern is that Russia, the dominant stakeholder, and China may join hands. They would be seeking alternative commercial shipping routes, but also further militarization to protect Russia's melting northern flank.

In this new Cold War situation where geopolitical realignments are continuously evolving, Japan's constancy and resilience as a democratic supporter of the liberal world order has served it in good stead with Europe. Japan is gradually becoming Europe's leading Indo-Pacific partner of choice largely due to Japan's diplomatic efforts to put priority on norms. But for the "natural" partners to also become "normative, reliable" partners, a consolidated foreign policy approach is needed.

If the plan includes other like-minded middle powers like India, which have their own new calculus with Europe, it would be good for the interests of both Japan and Europe. As well, it would facilitate the creation of a new balanced, sustainable middle-power-led free and open architecture for the strife-torn Indo-Pacific.