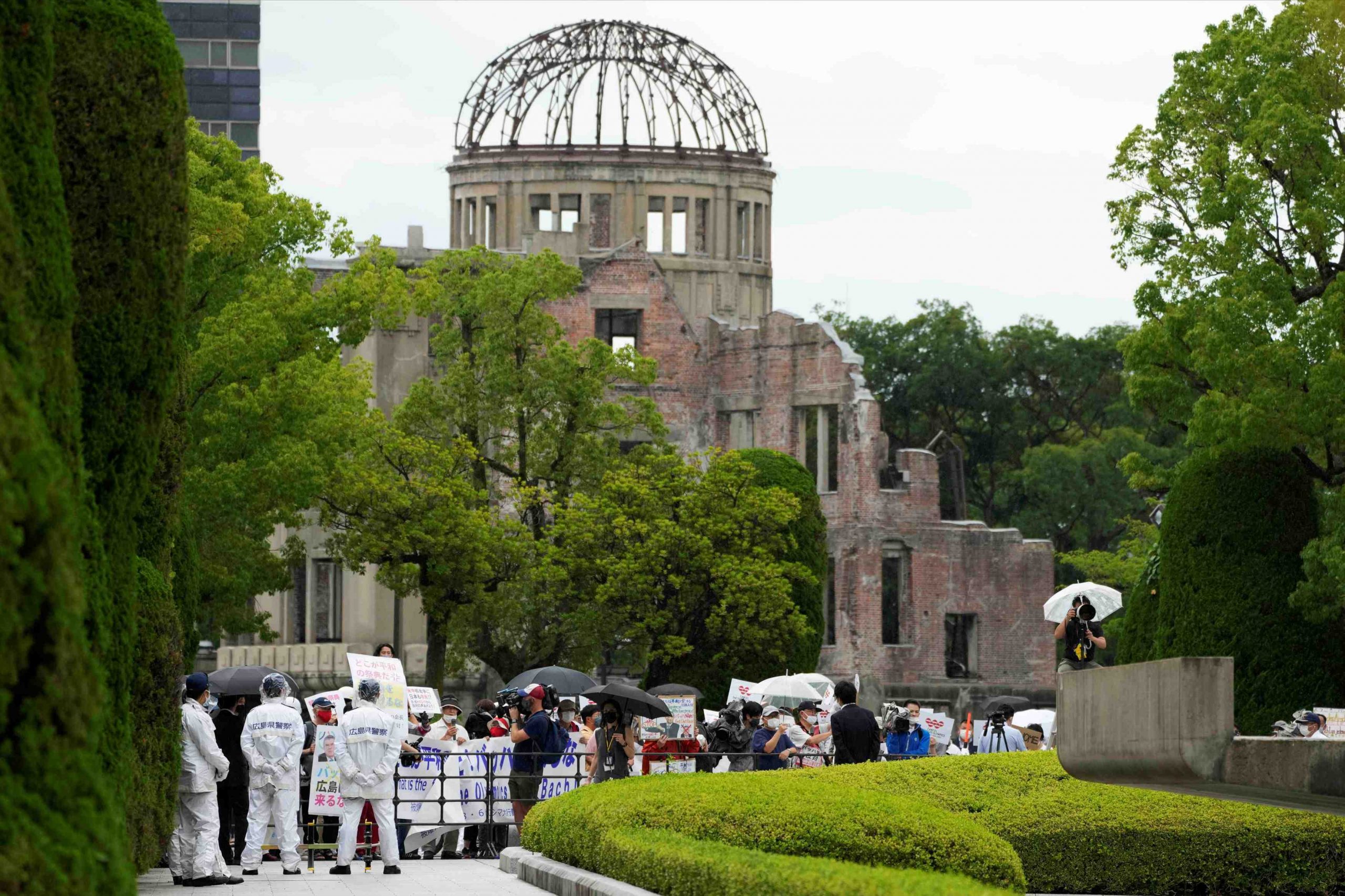 Even as the drama of the second Summer Olympic Games continued to unfold in Tokyo, a subdued ceremony to mark the 76th anniversary of the first atomic bombing was held in the city of Hiroshima on August 6.

At the first Tokyo Olympics in 1964 the runner carrying the sacred flame on the last leg of its nationwide journey was Yoshinori Sakai, a man who was born in Hiroshima on the very day that the bomb was dropped. Sakai epitomized to the world the astonishing postwar recovery and dedication to peace of Japan, the first and only country to suffer an atomic bomb attack.

Now, as the Olympics are held in Japan’s capital for a second time, the world finds itself combating a new menace in the form of the COVID-19 pandemic.

Even though for the second year in a row the solemn ceremony at Hiroshima had to be scaled down, the sincerity with which attendees prayed for the repose of the souls of the victims of the atomic bomb attack remains undiminished.

A state of emergency has been declared in several prefectures and other measures are being taken to stop the spread of the virus. Now is the time to stay home and quietly pray for the dead.

The average life expectancy for atomic bomb survivors (hibakusha) is 84 years. That mark is fast approaching, as the victims grow older.

Recently a final favorable verdict was handed down by a court in the so-called “black rain” (kuroi ame) civil suit. The plaintiffs were hibakusha who were near the epicenter when the bomb fell in August 1945 and therefore directly exposed to large levels of radioactive fallout. They were seeking compensation for their suffering. The Japanese government should now move quickly to establish a mechanism for providing assistance to these victims.

But even as the ranks of those who directly experienced the horror of atomic weapons grow thinner, the global threat of nuclear weapons is increasing.

As of January 2021, around 50 nations and regions had signed the UN treaty for the total prohibition of the development, testing, possession and use of nuclear weapons. Although we would very much like to see progress made towards the elimination of nuclear weapons, fulfillment of that wish will be by no means easy. Criticism of Japan for not signing the treaty is also shortsighted.

First off, we would note that not one of the countries possessing nuclear weapons—including the United States, Russia, China, the United Kingdom and France—has signed the treaty. Nor have any of the NATO countries, South Korea or other nations that like Japan depend on the nuclear umbrella of the United States as the ultimate deterrent for their defense.

As the only nation to have been bombed with atomic weapons, Japan naturally wants to see the elimination and aims for the reduction of stockpiles of nuclear weapons. Nonetheless, we need to be cognizant of the stark reality that it will be difficult to actually achieve that goal under the Treaty on the Prohibition of Nuclear Weapons.

Just take a look at the map. Japan is today under constant nuclear threat from China, Russia and North Korea.

If Japan were to join the treaty for the elimination of nuclear weapons, it would first have to relinquish the right to have a nuclear deterrent. And even assuming that all the nuclear powers agreed to abandon their nuclear weapons, there is no guarantee that they will not continue to maintain weapons behind the scene or that terrorist organizations will not get their hands on such terrifying weapons.

Again, we emphasize that Japan is the only country that has ever been the victim of an attack with atomic weapons. That is all the more reason why we need to have a sense of mission and the resolve to chart our own course.

It is our duty to continue to tell the world about the tragedies that occurred at Hiroshima and Nagasaki. It is also our duty to ensure that Japan will not only be the first but also the last nation to be attacked with an atomic weapon.

However, we cannot rely on idealism alone to achieve that goal.

Instead, we must have the determination to seek peace from a realistic standpoint. The reality of nuclear weapons in the world today is the very reason why Japan, the only hibaku nation, cannot sign the Treaty on the Prohibition of Nuclear Weapons at this time.