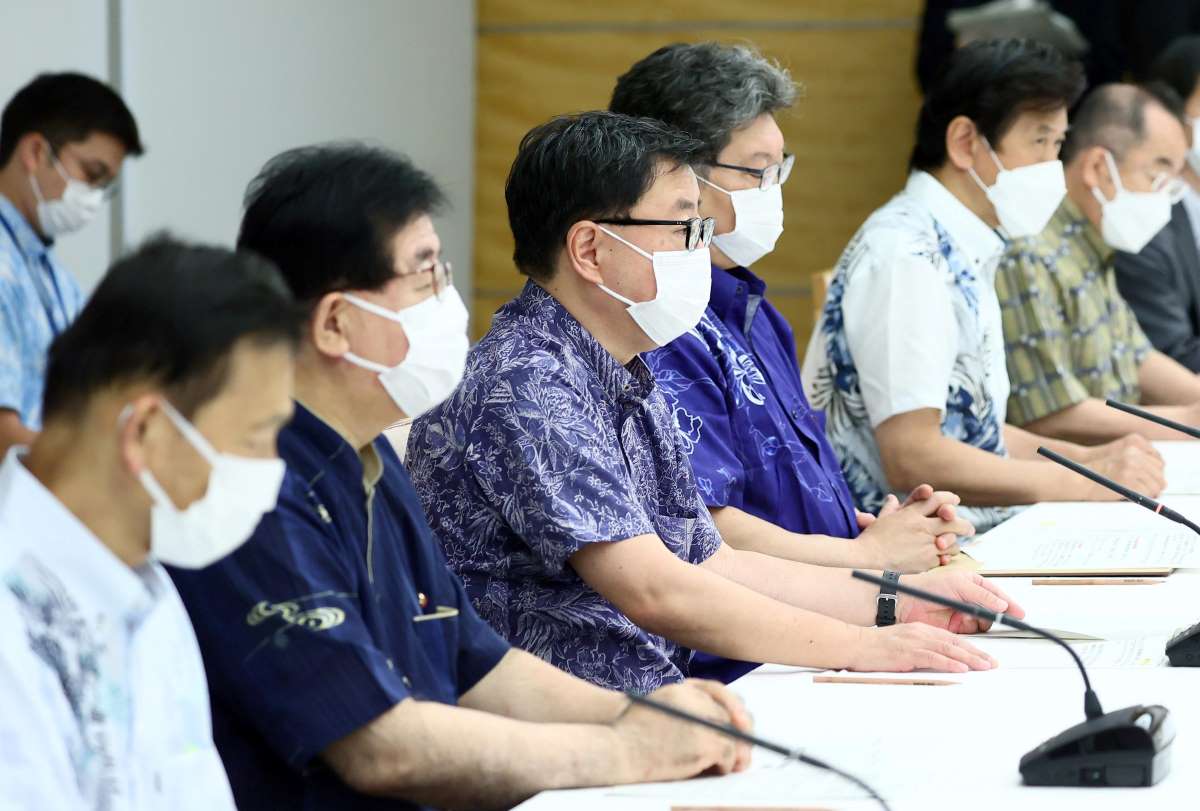 Chief Cabinet Secretary Hirokazu Matsuno sets the tone at the first ministerial meeting on electricity supply and demand in 7 years, at the Prime Minister's Office on June 7. (Photo by Yasuhiro Yajima).

With growing concern over the tightening supply-demand balance for electricity throughout Japan in the summer of 2022, the government has decided to ask companies and households to save electricity from July to September. The request is the first in seven years.

The government aims to curb power demand by asking the public at large to save electricity and prevent large-scale blackouts from occurring.

In March 2022, the government issued its first warning of a possible power shortage in eastern Japan, with the region on the verge of a large-scale blackout.

In light of this, the government will establish a new early warning system to alert households and businesses of tight supply and encourage them to conserve electricity.

Some idle thermal power plants will be restarted as part of measures to increase supply capacity, but power shortages throughout Japan at the beginning of 2023 are expected to be even more severe than this summer, especially in the areas served by Tokyo Electric Power Company (TEPCO).

Japan can no longer rely solely on power conservation. To expand supply capacity, there is an urgent need to restart nuclear power plants whose safety has been confirmed.

A reserve ratio (the level of surplus) of at least 3% is required to ensure a stable supply of electricity. According to the government, if July were to be extremely hot, the reserve ratio could fall to 3.1% in the Tohoku, Tokyo, and Chubu service areas. Except for Hokkaido and Okinawa, the reserve ratio is expected to remain at 3.8% for the rest of Japan.

A ministerial meeting on the power supply was called for the first time in five years because of this problem. The outcome is a decision to request businesses and households to save power without numerical targets. Consumers will need to make a skillful and reasonable effort to save power.

The government is also set to call for preparations for rolling blackouts, in which the power supply would be shut off intentionally in different regions at predetermined times.

However, rolling blackouts would have a massive impact affecting not only daily life, but also factory operations, shops, and businesses. Electric power companies and the government must do everything they can to increase supply capacity in order to avoid having to implement rolling blackouts.

TEPCO’s service areas are expected to see the reserve ratio fall into negative territory in January and February 2023, with many other regions also falling below 3%.

It is essential that the government recognize that the power supply-demand situation is extremely critical and implement measures, such as accelerating the restart of nuclear power plants by improving the efficiency of safety inspections. Promoting the purchase of self-generated electricity would also be helpful.

Among the factors contributing to the power shortage, the effects of the government’s deregulation of electricity and decarbonization policies cannot be overlooked. By focusing exclusively on introducing solar power generation, the government has neglected to ensure a stable power supply, and we are now paying the price.

A review of the institutional structure of Japan’s energy system is urgently needed.