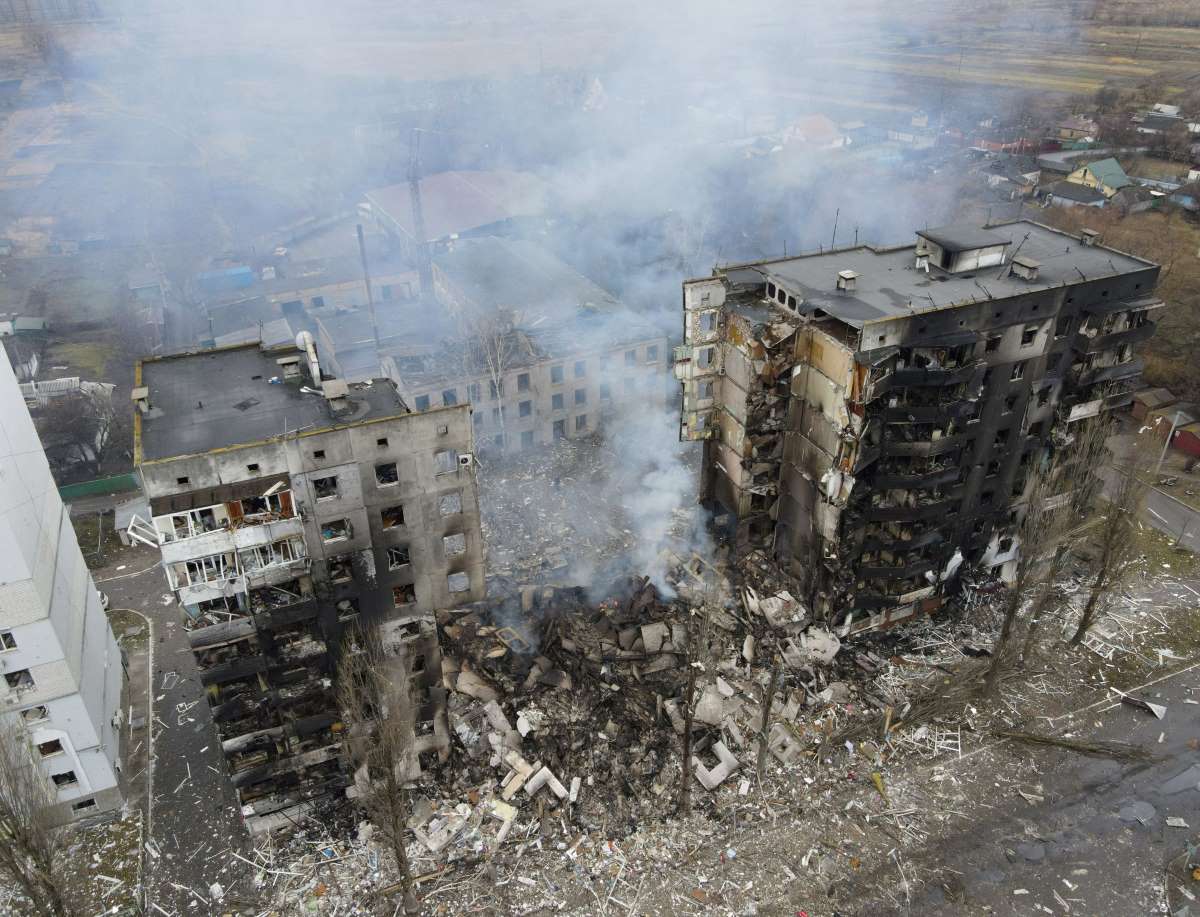 An aerial view shows a residential building destroyed by shelling, as Russia's invasion of Ukraine continues, in the settlement of Borodyanka in the Kyiv region, Ukraine March 3, 2022. Picture taken with a drone. (Reuters)

On February 27 Russian president Vladimir Putin announced that he was ordering his nation’s nuclear deterrence forces to be put on a state of high alert.

He thereby sought to use his nuclear arsenal to intimidate Western nations, which have been strengthening sanctions against Russia due to its invasion of Ukraine. This crazy order ーwhich abnormally fueled the crisisー is totally unacceptable.

If there is an exchange of attacks with strategic nuclear weapons in a general nuclear conflict, that would result in the destruction of the entire world. Putin must desist from making such stupid provocations.

It was only natural that White House spokesperson Jen Psaki should declare that Putin “is manufacturing threats that don’t exist in order to justify further aggression.”

The February 19 test launch of a Russian ICBM like other such exercises are Putin’s way to boast that he possesses a nuclear arsenal. His order to raise the readiness level of Russian nuclear forces was motivated by the fact that his attack on Ukraine has not been proceeding as planned.

Putin obviously is seeking to intimidate Ukraine prior to ceasefire negotiations, and stymie the efforts of Western nations which have been supporting Ukraine.

No doubt he is also eager to deal a blow to the West by causing chaos in the global economy.

There is also concern that Putin will use his strategic nuclear force to grab territory from Ukraine, which does not possess nuclear weapons, and attack or threaten that country’s military forces in the Black Sea. Russia continues to adhere to Soviet military doctrine that maintains only a low hurdle to the use of nuclear weapons in combat. But such use would be absolutely unforgivable.

It should not be forgotten that Japan is being directly threatened by the nuclear forces of China, Russia and North Korea. For example, there is a danger that in the event of crises related to the Senkaku Islands or Taiwan, China may make nuclear threats against Japan.

Japan’s Self-Defense Forces do not possess nuclear weapons. Therefore, Japan’s ability to stop a Chinese invasion presumes that the protection of the United States nuclear umbrella (nuclear deterrent) would come into full play.

In other words, nuclear deterrence represents the bedrock of our national security.

Former prime minister Shinzo Abe recently raised a serious issue during an interview on Fuji Television. He said that it is time for Japan to discuss the possibility of embracing the concept of “nuclear sharing”.

Under this arrangement, already in place for some NATO members including Germany, nuclear weapons have been prepositioned in countries for when they might be needed for defense.

However, Kishida’s out-of-hand rejection of even discussing the concept is questionable.

We need to reconsider the three non-nuclear principles if blind adherence to them adversely impacts Japan’s national security.

The time has come for frank discussion of the adequacy of Japan’s overall nuclear deterrence posture, including the possibility of nuclear sharing.