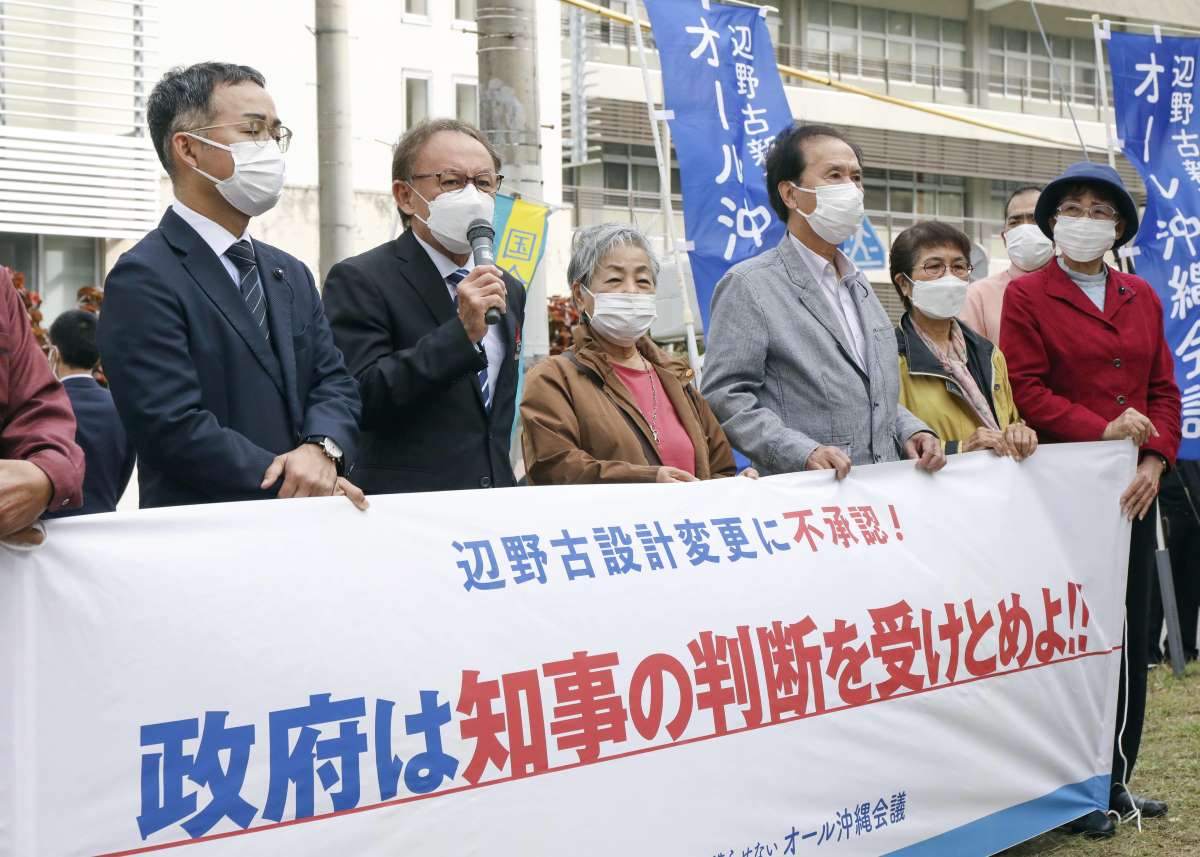 Okinawa Governor Denny Tamaki (second from left) and others appeal at a rally before the first oral argument in the Henoko military base lawsuit. December 1, 2022 in Naha City (©Kyodo)

Amidst an increasingly harsh security environment, Japan is currently making great efforts to enhance its deterrence capabilities for defending the Nansei Islands. At the same time, Okinawa Governor Denny Tamaki has been repeatedly criticizing the Self-Defense Forces (SDF).

The island chain stretches from the southern tip of Kyushu to just off Taiwan. Whether it is the SDF's activities or their force augmentation, Tamaki conveys his disdain through word and deed.

After the defense ministry announced that it planned to increase the size of the Naha-based 15th Brigade of the Ground Self-Defense Forces, Governor Tamaki complained that the move would "increase the onerous burden of military bases" on Okinawans.

Disdaining Exercises to Defend the Islands

"Operation Keen Sword" was a field training exercise carried out by Japan and the United States for the defense of the homeland in November 2021. During the exercise, the SDF airlifted Type-16 mobile fighting vehicles to Japan’s westernmost island Yonaguni, and these vehicles traveled along prefectural roads.

Governor Tamaki asked the Okinawa Defense Bureau to call off the training. And after the exercise wound up, he commented that it had been "highly regrettable."

In stark contrast, the mayor of Yonaguni recognized the necessity of the exercise. However, Tamaki lamented that the use of a port and other civilian facilities by the forces involved "created various concerns for residents of the prefecture."

Although he is the governor of the prefecture, such statements show a lack of judgment. Okinawa and the Nansei Islands are on the front line of the nation’s defense. It is shameful that the governor will not even express appreciation for the efforts of the SDF and its personnel.

Governor Tamaki should retract the series of statements he has made that have obstructed the SDF from performing their duty. He should demonstrate that he understands the need for the SDF to bolster its capabilities and carry out training exercises.

Enhancement of Japan’s deterrence capabilities serves to protect all the islands in Okinawa Prefecture. That includes the Senkaku Islands, along with residents of Okinawa.

Tamaki has said, "If the Ground Self-Defense Force is to be strengthened, we should reduce the number of US military bases, etc."

However, if Japan is to be able to stand up to China, a country which is engaged in a relentless build-up of its military, the deterrence capabilities of the Japan-US alliance are absolutely essential.

In the past, Tamaki had said that he "understands the necessity" of the Japan-US Security Treaty. Nonetheless, since his reelection in September with the support of the Japan Communist Party (JCP) and other groups, he has exhibited a more pronounced "reformist" (kakushin) streak.

The All Okinawa coalition that backs Tamaki opposes strengthening the SDF, among other "progressive" positions.

If Tamaki panders to reformist forces that refuse to face up to the deteriorating security environment, then he will be unable to fulfill his responsibilities as governor. After all, he is entrusted with protecting the lives and property of the people of the prefecture.

Of course, defense is a prerogative of the national government.

However, properly executing evacuation orders and relief activities for residents is the responsibility of the prefectural government. This is stipulated under the civil protection law, "The Law concerning the Measures for Protection of the People in Armed Attack Situations, etc."

Fulfilling that responsibility requires close cooperation between the prefectural government and the SDF.

Meanwhile, national leaders need to thoroughly explain to the people of Okinawa the necessity for strengthening the SDF and conducting regular training exercises. Only if the national and prefectural governments collaborate can deterrence be enhanced.

Leaders at the national and prefectural level should bear in mind that the ultimate goal for all is the preservation of peace.