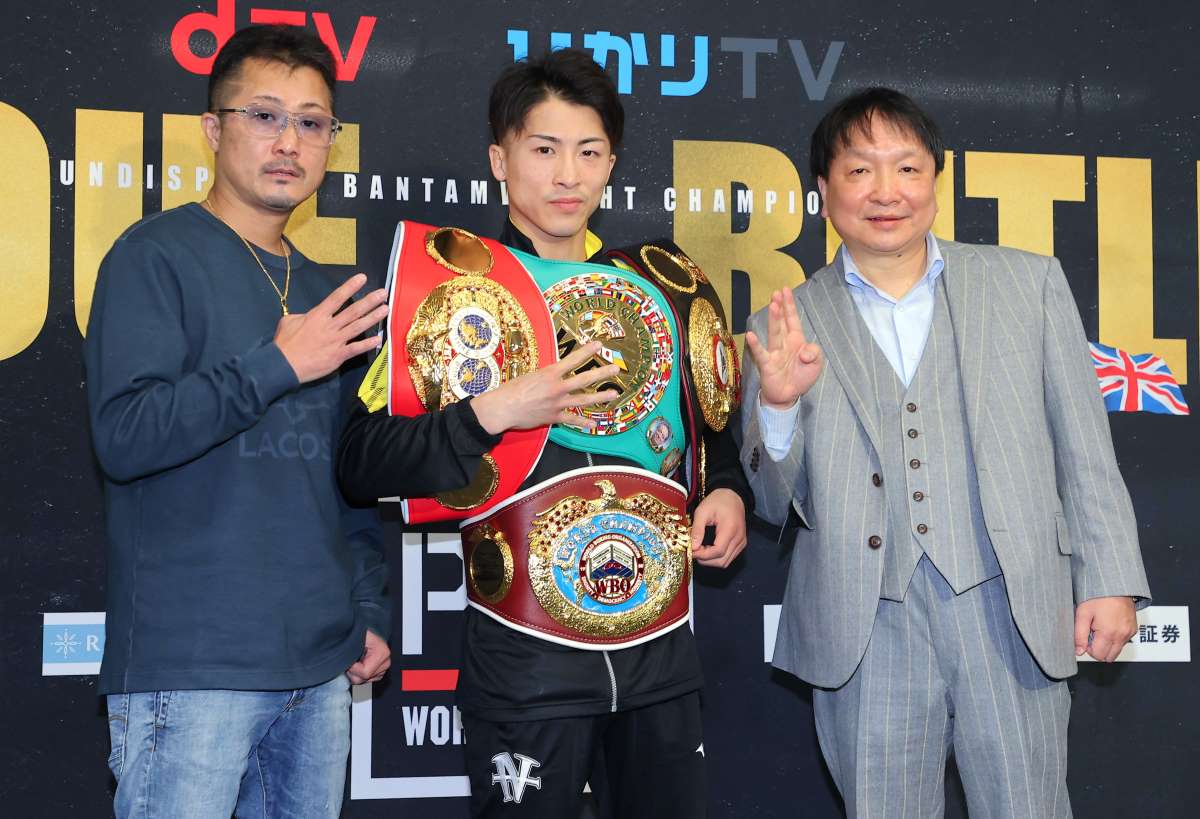 Naoya Inoue shows off his four unification belts in a photo shoot. Trainer Shingo Inoue stands on his left, and gym president Hideyuki Ohashi stands on his right on December 14 in Yokohama.(© Sankei by Norikazu Fukushima)

"Monster" Naoya Inoue has become the first undisputed bantamweight champion in professional boxing's four-belt era. He is only the ninth fighter in all weight classes to achieve this feat, and the first Asian to do so.

Undefeated in 24 professional bouts, "Monster" Inoue went into his December 13 bout in Tokyo with Englishman Paul Butler already owning the WBA, WBC, and IBF titles. Butler was the WBO champion until Inoue knocked him out in the 1th round.

All three judges had Inoue leading on their scorecards after 10 rounds.

The 29-year-old Inoue plans to move up a weight class in 2023. He is aiming to become a four-weight class champion. He has already won world titles at super-flyweight and light-flyweight championships.

The venerable United States boxing magazine Ring has named Inoue as "pound-for-pound" the strongest boxer across all weight classes. Moreover, he is expected to regain top ranking in the boxing world that he earlier lost to heavyweight Oleksandr Usyk (Ukraine).

The high-flying Inoue, who is already a Japanese treasure, can be expected to soar to greater heights in the days to come.

Naoya Inoue Achievements Out of the Public Eye

The significance of Inoue's achievement in unifying the bantamweight belts is that he has restored luster to the champion's crown. Competing sanctioning bodies with different titles had left the crown tarnished. Artificially contrived "battles" cannot generate genuine excitement.

Somewhat saddening, however, is the fact that the Inoue-Butler showdown could not be viewed on either terrestrial or satellite TV.

The video streaming service "dTV," which had broadcast rights to the match, hastily decided to let the public view the bout for free shortly before its start. But how many fans could have known that?

Nor was the exciting middleweight unification match between Ryota Murata and Gennady Golovkin in April broadcast live on TV.

Likewise, even during the Asian finals of the qualifying round for soccer's World Cup tournament, Japan's away matches could only be seen on video streaming services.

During the World Cup itself, in addition to terrestrial TV broadcasts, the streaming service ABEMA broadcast all the matches free of charge. But who knows what the situation will be during the next World Cup?

Fees for broadcast rights continue to soar as video distribution services with deep pockets enter the market. The day when we can no longer view the World Cup or the Olympics on TV is probably not far off.

From the perspective of letting free market principles prevail, we cannot complain. Furthermore, high broadcasting rights fees may also serve to strengthen players. However, on balance, are they a good thing?

After all, won't pay-per-view broadcasts prevent access for a broad swath of the viewing public?

For example, Great Britain's revised Broadcasting Act of 1996 enshrines and calls for the protection of the "right to universal access." This allows everyone, regardless of whether they are rich or poor, to watch important matches of great public interest free of charge.

We earnestly hope that children will always be able to see sports events at their best, be it in the form of "Monster" Inoue in the ring, Shohei Ohtani playing in MLB in the United States, the excitement of the World Cup, or the emotional reactions of medalists at the Olympics.