Russia is increasing its economic cooperation with North Korea. It turns out that the North Korean combined passenger and cargo ship Mangyongbong-92, which was barred from Japanese waters, will begin regular trips to Russia in May.

The ship is planned to make 6 trips a month between Vladivostok, Russia’s easternmost city, and Rason in North Korea’s northeastern special economic zone. 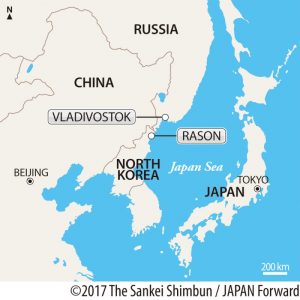 This show of support from Russia is happening while the international community is increasing pressure against North Korea’s continued nuclear and missile development. Russia’s breaking of sanctions is unacceptable.

Russia plans to export agricultural and industrial equipment as well as seafood via the Mangyongbong-92. What’s more, in accordance with the pact concluded between the two countries in March, the vessel will likely carry North Koreans to work in the Russia’s far east.

Previously, the Mangyongbong-92 traveled between Japan and North Korea. After missile launches and other provocations, the Japanese government in 2006 banned the ship from its ports in a special sanction.

Since Japan is off limits, Russia has taken its place as North Korea’s trading partner.

The Mangyongbong-92 had been used for Chongryon school trips or North Korean zainichi visiting home. But it also served as a command post for spies hidden in Japan, and a route for illicit money transfers and smuggling goods past export controls.

This regular service between Russia and North Korea is likely connected to North Korea acquiring foreign currency. What would stop it from being used for transporting prohibited goods, such as missile components?

This plan will simply become another loophole to subvert sanctions placed by the international community after legal a vote by the United Nations Security Council.

It appears the day the ship will first dock in Vladivostok, May 9, is set aside to celebrate victory in the Second World War. By choosing the special day for both of them, Russia shows increase backing for North Korea. It means that Russia is interfering with UN Security Council resolutions and the solidarity of the international community.

Earlier, Russia used its veto power to force the rejection of UN Security Council resolutions calling for an investigation into Syria’s use of chemical weapons. It has also spoken strongly against statements opposing North Korea’s ballistic missile launches.

Undoubtedly, Russia is hoping to benefit economically from defending nations that possess weapons of mass destruction. So how should Japan regard Russia in such situations?

Clearly, Russia is taking a different stance from the triumvirate of Japan-US-China in facing the reality of the rising threats in East Asia. Japan and the US need to work together fully to deal with this issue.