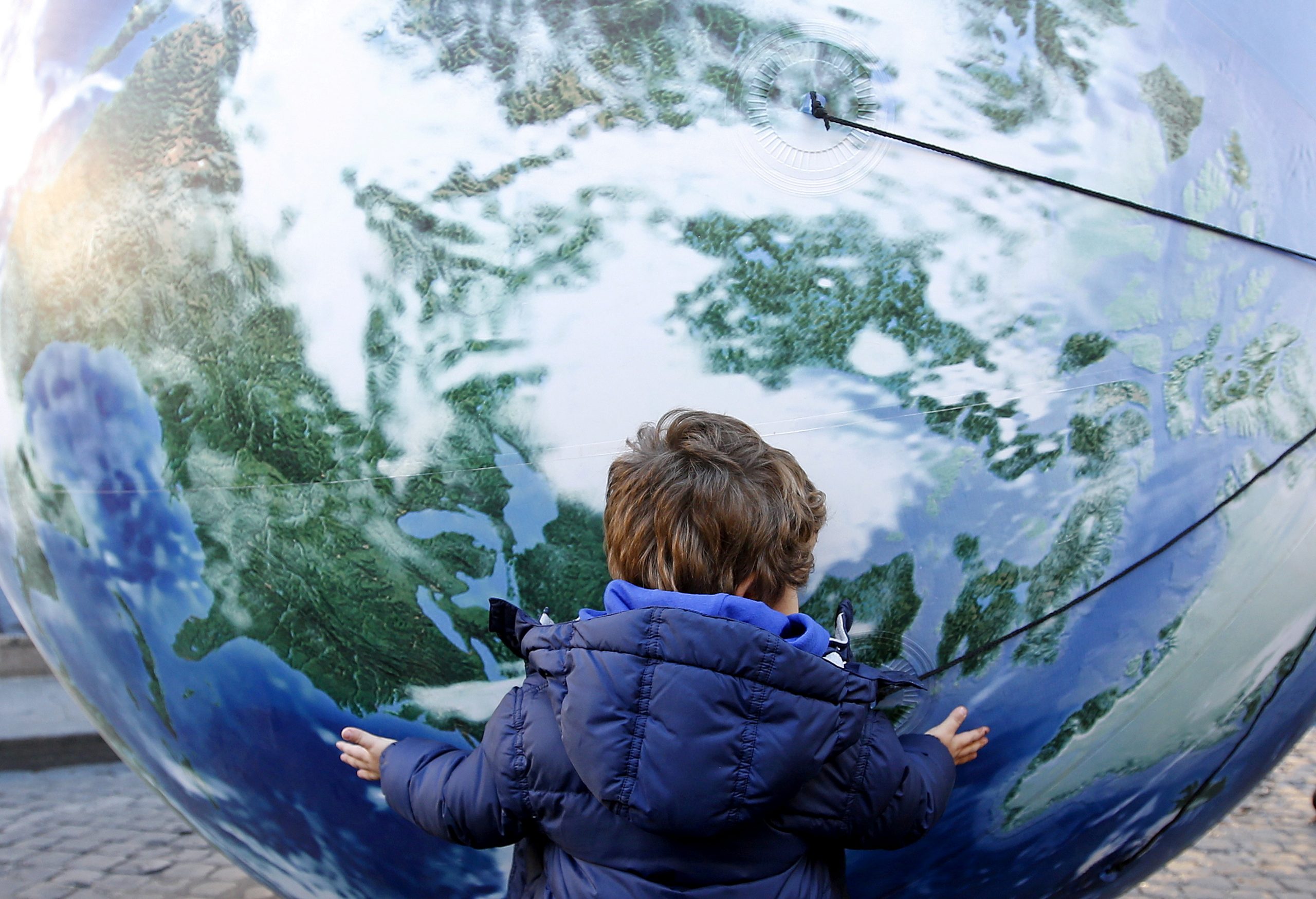 A child embraces a globe shaped balloon during a rally held ahead of the start of the 2015 Paris World Climate Change Conference, known as the COP21 summit, in Rome, Italy , November 29, 2015. REUTERS/Alessandro Bianchi/File Photo

The United Nations Working Group III of the International Panel on Climate Change (IPCC) has published its Sixth Assessment Report.

This report summarizes measures to reduce greenhouse gas (GHG) emissions, such as carbon dioxide (CO2), along with their effects on global warming.

The report found that the growth rate of worldwide GHG emissions has decreased. Because growth is not yet zero or negative, however, emissions continue to rise steadily.

Given the continued growth in greenhouse gas emissions, the report noted that the peak output must be achieved before 2025. A transition to GHG reductions on that schedule, it said, would reduce the expected impact of global warming to “1.5 degrees Celsius” compared to the pre-industrial era.

The 1.5 degree Celsius target is a broad agreement reached at the 26th Conference of the Parties (COP26) to the United Nations Framework Convention on Climate Change held in the United Kingdom in the autumn of 2021. But to achieve reduced emissions within three years represents an unrealistic goal.

China is the world’s number one GHG emitter, and it intends to continue increasing its emissions through 2030. China’s greenhouse gas emissions account for about one-third of the total in the entire world. There is no indication that China’s policymakers are reading the climate change panel’s report, nor will they be moving proactively toward reductions.

Japan has earnestly responded to the panel’s report and the COP agreement — part of a consistent strategy that has earned Japan global respect. However, this has placed restrictions on Japan’s industrial advances.

It is time to rebalance national and global interests. It is time for Japan to improve its international negotiating skills, including tact and confidence.

Since the Kyoto Protocol went into effect in 2005, the issue of global warming has been inextricably linked with economic growth by all concerned parties. But now, with Russia’s invasion of Ukraine, an element of energy security has been added.

One example demonstrating this emerging situation is the current predicament faced by Germany. Germany has always prided itself on advanced environmental achievements. It has formulated an energy policy that combines nuclear-free and coal-free power with renewable energy. Unfortunately, Berlin’s reliance on Russian natural gas resources has been discomfiting.

Japan has pledged to reduce CO2 and other emissions in the fiscal year 2030 by 46% from FY 2013 and further down to virtually zero by FY 2050. However, the restart of nuclear power plants for decarbonized power sources is at a standstill after 10 plants have restarted.

The possibility of international conflict is smoldering around Japan. Will Japan survive a national energy crisis with its energy policy that relies on renewable energy and natural gas while neglecting nuclear power?

The three IPCC working groups’ reports are now finally available after eight years. We advise calmly rethinking the nature of the global warming problem; now is an excellent opportunity.