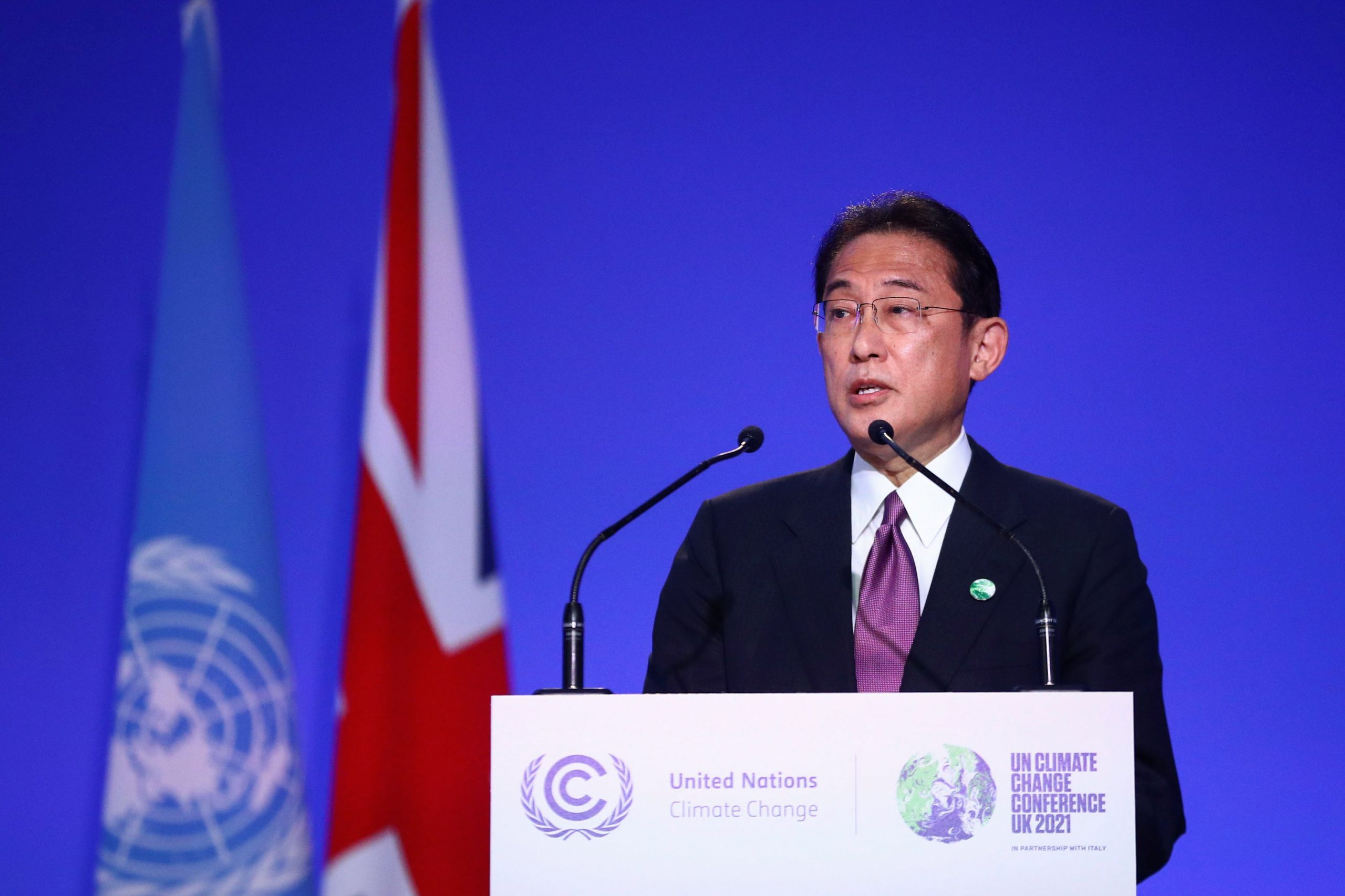 Fumio Kishida delivers his opening speech on November 2 at the plenary session of COP26.

Kishida brought his proposal to the table on the country’s stance towards climate change. The trip comes right after Japan’s October 31 national elections for the lower house of the National Diet.

“Being carbon neutral by 2050 is the long-term strategy that Japan has mapped out, and we plan to see it through. We aim to decrease CO2 emissions 46% by 2030 compared to 2013, and pledge to strive for 50%,” said Kishida in the plenary session in the morning of November 2.

The other pillar of Japan’s policy proposal was the extension of support to “Asia as the engine of growth” for Japan and the world.

“Japan plans to stand at the center of Asia, introducing renewable energy as much as possible in Asia. We plan to support the transition to clean and renewable energy, to make a carbon-free society,” said the Prime Minister.

Kishida attended the conference on a day when the tone among world leaders’ statements was one of increasing urgency.

That same day more than 100 countries signed a pledge to halt and reverse deforestation by 2030. In addition, the Global Methane Pledge was launched by the United States and the European Union after first being proposed in September. It promises to cut methane emissions by 30% by 2030 compared to 2020 levels. Japan participated in both commitments.

“I can’t think of two days where more has been accomplished dealing with climate than these past two days,” US President Joe Biden said in a press conference upon the conclusion of the world leaders’ summit on November 2.

COP26 is already promising to be the most relevant environment conference since 2015, when the Paris Agreement was signed by 196 parties. The treaty aimed to limit global warming to well below 2, preferable 1.5 degrees Celsius, over pre-industrial levels.

It is also the first world leaders’ summit since Paris. Leaders of over 100 countries and representatives from over 200 countries are participating. More announcements are expected during the coming weeks, before COP26 closes on November 12.

Japan’s pledge to help countries in Asia to transition to greener energy comes at a time of increasing awareness of the need to help developing countries reach the net carbon zero target.

Biden, in his speech on the opening day of the world leaders’ summit on November 1, called on countries to come together:

“Those of us, who are responsible for much of the deforestation and all the problems we have so far, have an overwhelming obligation to the nations who in fact were not there, have not done it. And we have to help, much more than we have thus far.”

On October 31, COP26 president Alok Sharma had urged leaders of developed countries to stick to the proposal of dedicating $100 billion USD per country per year to financing climate measures in developing countries.

PM Kishida addressed ways in which Japan could contribute to the ecological transition in Asia.

On November 2, the Japanese PM promised to contribute further funds: “Due to failure to achieve the pledges of $100 billion USD per year by developed countries, something which is sorely needed, the Japanese government announced in June 2021 that it would pledge an extra $60 million USD over five years. This will be a combination of public and private funds.”

Japan also showed its willingness to support a maximum of $10 million USD of financing through the Asian Development Bank to support the creation of a framework for a carbon free society.

“The zero-emissions transformation in Asia is an engine for the Japanese economy, and we plan to support it to the best of our ability,” advocated the Japanese prime minister.

The Japanese Ministry of Environment held an event at the Japan Pavilion called “Leading Efforts Towards Achievement of Zero Carbon City,” sharing concrete ideas for solutions.

The talk sought to showcase efforts of municipalities — such as Nagano, Kitakyushu, Yokohama, and Maniwa City — which are implementing practical solutions on the ground to help with the net carbon zero target, such as biomass fuel, and disaster resilience solutions.

In addition, Kitakyushu is collaborating internationally by sharing its know-how on energy and transportation, with Hai Phong in Vietnam.

“In Japan, there are actually a lot of cities with concrete initiatives getting other cities to commit to green targets. It’s practical implementation. I think this is a strength of Japan,” said Sugimoto.

As negotiations plowed on at COP26, the absence of big country leaders such as China and Russia was notable.

U.S. President Joe Biden stressed the importance of showing up, and voiced his opinion of the absent world leaders: “I think they made a mistake. The rest of the world will look at China and say ‘what value are they adding?’ The same with Russia.”

Some points of debate were provided on the first day of negotiations. Namely, India’s Prime Minister Narendra Modi said on November 1 that the country would pledge to cut its emission to net zero by 2070, while most other countries have promised to do so by 2050.

China has announced plans for carbon neutrality by 2060.

In response, Italy’s Prime Minister Mario Draghi, and COP26 and G20 summit partner host country, referred to those pledges in a press conference the same day, calling them “incoherent behavior” compared to the promises made in previous venues.

However, Draghi, acknowledged “The achievements that we made for the first time in the G20 negotiations in pledges to keep global warming below 1.5 Celsius were also achieved thanks to [Modi].”

‘One Minute to Midnight on the Doomsday Clock’

On November 2, the world leaders’ summit came to an end, leaving delegates and NGO representatives to take the floor.

The tone was set on November 1 when host nation leader Prime Minister Boris Johnson told the audience in the plenary session that the world was like James Bond trying to deactivate a “doomsday device, desperately trying to work out which colored wire to to pull to tear it off, while a clock ticks down remorselessly to a detonation that will end human life as we know it.”

He continued gravely, “except, this is not a movie.”

“It’s one minute to midnight on that doomsday clock, and we need to act now,” said Johnson passionately.

David Attenborough, a renowned scientist who attended as “People’s Advocate at the event,” also called on leaders to act in a race of “desperate hope”:

He concluded: “In my lifetime I have witnessed a terrible decline. In yours, you could and should witness a wonderful recovery. That is why the world is looking to you, and why you are here.”

As even on November 2, activists’ protest outside of the conference continued to rage on, the gist was: the winds have changed. Let’s hope the world will not be disappointed.