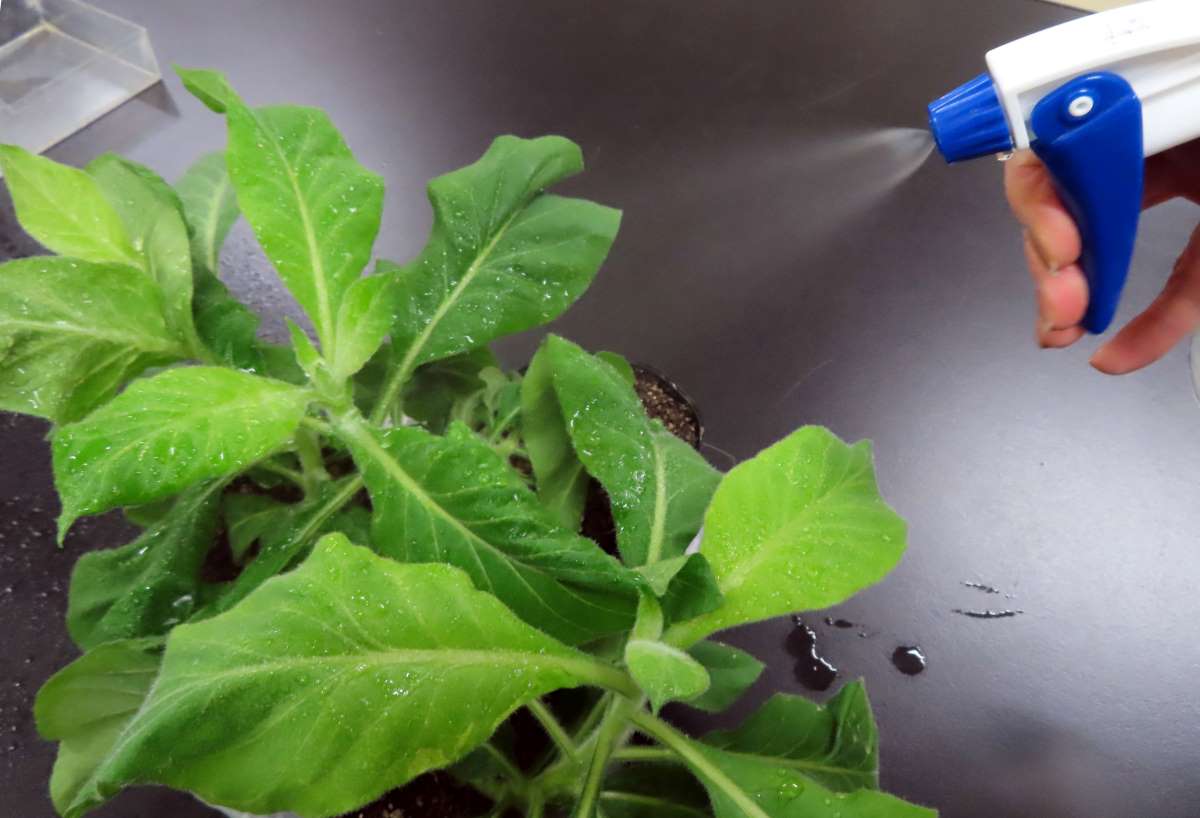 A new technology that allows changes to the traits of plants just by spraying them. (Photo by Juichiro Ito)

Improving the quality and productivity of crops by modifying their original properties to increase resistance to pests and extreme weather has been going on for ages. There have been various methods used, such as cross-breeding, genetic recombination, and editing the genome (which contains all of the genetic information). But each takes time and effort.

Recently, however, a team from RIKEN and Kyoto University has become the first in the world to efficiently control the proteins that impact the characteristics of an organism by simply aiming at the small organs inside cells and spraying nucleic acid onto them.

“Hybridization is among the methods that are used to alter characteristics. It involves crossing plants of different species, for example a variety that tastes good with one that is resistant to pests, to create a new plant that inherits both positive traits. However, it takes several hundred or even several thousand years of crossbreeding to select the traits. Developing a new species in this way is a long process.

Genetic modification brings out certain traits by inserting genes that relate to the given trait, such as genes that are resistant to droughts and genes that grow larger fruits, into the genome of crops. But, where the genes will end up among the original genome is up to chance, possibly introducing undesirable traits. As such, it is necessary to strictly manage the safety and selection of species, which requires time, effort, and a high cost.

In recent years, genome editing has also attracted attention. Instead of introducing new genes from outside, traits are modified by cutting and editing a specific gene in the existing genome using enzyme “scissors.” For example, if there is a gene that limits the production of nutrients, it can be destroyed to produce more nutritious crops. However, this method also requires effort, cost, and a high degree of safety.

The research team is studying improving the pest-resistance of soybeans. Stink bugs have been the natural enemy of soybeans. They suck juice from bean pods and inhibit the growth and quality. Exterminating them with pesticides takes effort and is expensive. Thus, the question is whether it would be possible to induce the soybeans to create substances that the stink bugs dislike. If the genetic information that makes these stink-bug-repelling proteins is sent into cells, their resistance towards pests can increase.

However, genetic modification and genome editing have many issues and are time-consuming.

Is there an easier way to modify the traits? As a result of repeated studies, the idea of ​​using a substance called a “cell-penetrating peptide (CPP)” has been developed.

A CPP, which is a series of short chains of amino acids, is able to pass through the membrane surrounding plant cells and enter its interior. If this is combined with artificial nucleic acids that contain the information to produce the desired proteins, mixed with pure water, and sprayed, the plants should be easily modified.

Therefore, an artificial nucleic acid that produces fluorescent proteins that glow green when exposed to ultraviolet rays has been created and synthesized into nano-sized molecules in combination with CPPs. After mixing this with water, it is sprayed onto thale cress (an annual herb), soybeans, and tobacco, among other plants, which are then exposed to ultraviolet light. When the leaves glow green, it shows that it is possible to synthesize proteins using this method.

Aiming at the Chloroplast

One issue is that the amount of protein synthesized in this fashion is small. Although artificial nucleic acids were able to penetrate into the cell nuclei, this isn’t a suitable location to synthesize large amounts of proteins. In order to synthesize an amount sufficient to modify the trait, it is necessary to send the proteins to the chloroplast, which is one of the organelles in the cell and is where photosynthesis takes place.

This problem has been solved by incorporating an amino acid sequence that has the function of entering only the target organelle into the CPP. As a result, the team has successfully mass-produced the artificial nucleic acid proteins inside the targeted chloroplasts for the first time in the world.

In addition to synthesizing the proteins, the team has also been able to suppress the production of proteins. When a plant that is genetically modified to synthesize fluorescent protein in the chloroplast is then sprayed with an artificial nucleic acid that inhibits the function of this protein, it does not shine even when exposed to ultraviolet light.

These results are likely to significantly advance crop modification. There is no need for genetic modification or genome editing. And depending on the design of artificial nucleic acids and CPPs, it is possible to freely change the proteins to be synthesized, the genes that inhibit certain functions, and the organelles to be targeted.

Not only will this make it easier to repel pests, but it can also help in the development of vegetables that contain more health-improving substances.

RELATED: A New Era for Food: The Potential Benefits of Gene-edited Foods

Additionally, if a substance that promotes flowering is produced, the fruiting cycle will be accelerated and production efficiency will be improved. We can also restrain the genes that hinder growth, which can possibly create larger fruits.

Dr. Keiji Numata, professor at Kyoto University and leader of the team, said, “Because you can modify the traits of plants with just a spray, you can easily apply it to a wide range of fields.

“It will especially be suitable for pest control on large-scale farms,” Dr. Numata continued. “Instead of modification of the gene itself, it is essentially a transient trait, so it’s also very safe. I want to proceed with research and put it to practical use as soon as possible.”