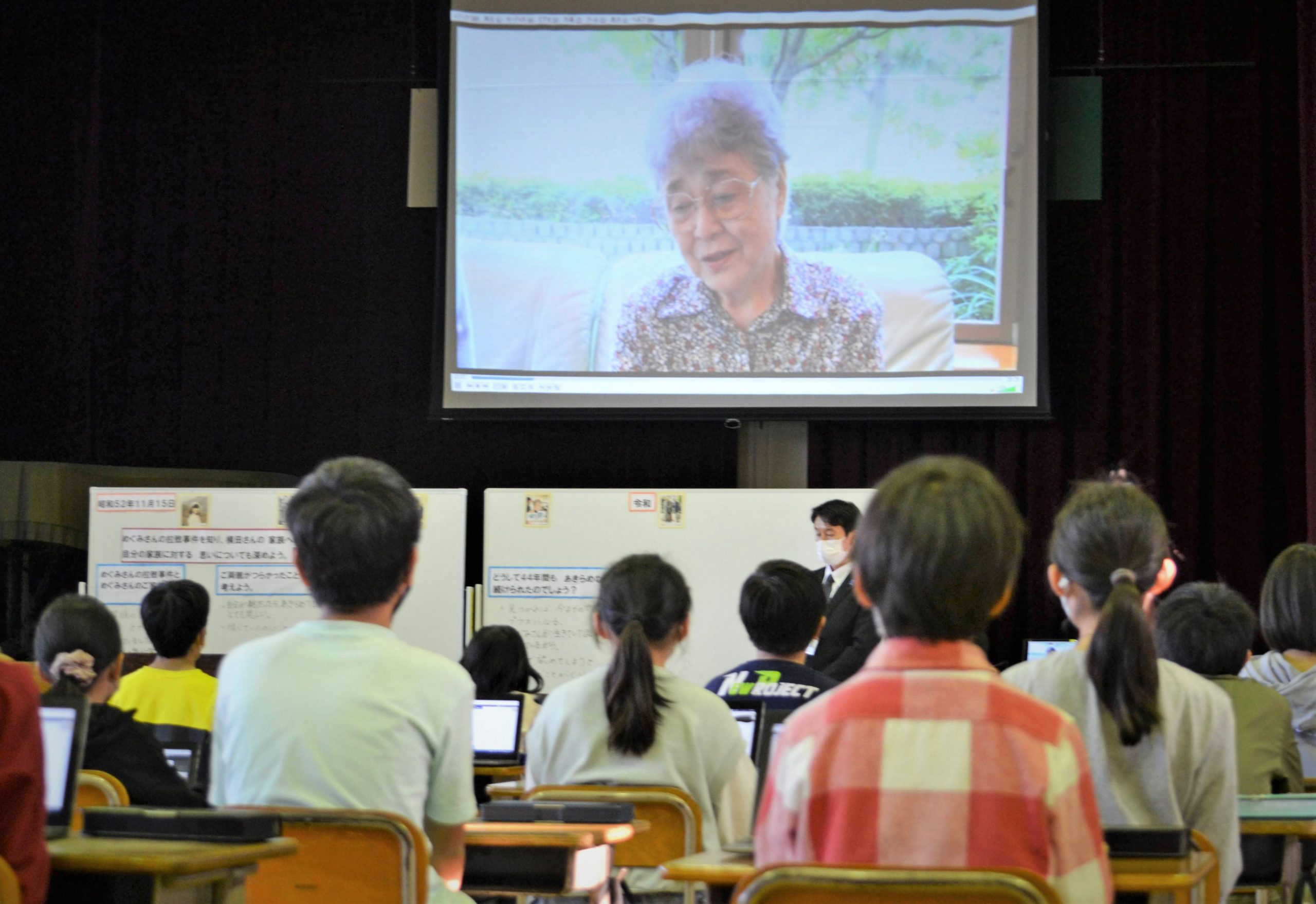 Sakie Yokota, whose daughter Megumi was abducted by North Korean agents when she was 13 years old, speaks to children in Japan. She only wants her daughter back, but North Korea won't allow her return.

On November 17, the Third Committee of the United Nations General Assembly, which is in charge of human rights issues, approved a draft resolution stating grave concern for the human rights situation in North Korea. The resolution refers to the abductions of Japanese nationals and calls on North Korea to provide information to families on the safety and whereabouts of the victims and to immediately return them to Japan.

The proposal was introduced by the European Union and co-sponsored by 60 countries, including Japan. The resolution will not be voted on, but is expected to be formally adopted at a plenary session of the UN General Assembly in December.

In 2005, the UN General Assembly adopted a resolution calling North Korea’s abduction of foreigners part of the “systemic” human rights violations of the country. Since then, resolutions to this effect have been adopted every year, making 2021 the 17th consecutive year.

The state of human rights violations in North Korea, including the torture of political prisoners in concentration camps, suppression of dissent, and restrictions on movement, have become widely known through the testimonies of North Korean defectors.

There is increasing awareness of the atrocities committed by the abductions due to petitions from the victims’ families and the fact that former U.S. President Donald Trump brought up the issue in an address to the UN General Assembly.

Considering the aging families of the victims, the draft resolution expresses grave concern for the suffering that the victims and their families have experienced over the years, and if approved, would “condemn in the strongest terms the long-standing and ongoing systematic, widespread and gross violations of human rights in and by the Democratic People’s Republic of Korea”.

North Korea’s Ministry of Foreign Affairs strongly denounced and rejected the draft resolution, arguing that it was a “grave violation of sovereignty” and an attempt to “smear our country’s image”. North Korea’s absolute refusal to listen to the concerns of the international community is unacceptable.

While the situation with North Korea remains deadlocked, the clock is still ticking. It is certainly not ideal that adopting a resolution condemning North Korea merely becomes an annual event at the UN General Assembly.

Every year, too, the UN Human Rights Council, with its 47 member states, meets in Geneva, Switzerland and adopts a resolution condemning the human rights situation in North Korea, calling for a resolution to the abduction issue. But there has been little to show for it.

In the debate on human rights violations, China and Russia have come to North Korea’s defense, just as they have done in the battle over North Korea’s nuclear and missile development within the UN Security Council. This time again they have spoken up for North Korea.

Countries like China and Russia, which do not hesitate to oppress their ethnic minorities, suppress democracy movements and crackdown on dissidents, are likewise incapable of seeing the violation of human rights in other countries as a problem. We should be wary of any collusion between these powerful nations.

Japan is aiming for solutions to the issues of nuclear and ballistic missile issues as well as the abductions of Japanese nationals by the state of North Korea. At a meeting with abductees’ families, Prime Minister Fumio Kishida expressed his determination to “take matters into my own hands” to bring the matter to resolution.

We hope that he will use all means at his disposal to reach a solution, including the application of international pressure through the General Assembly resolution, cooperation with the United States and other countries, and direct contact with the Kim Jong Un regime

Learn more about the abduction of Japanese by North Korea at this link.