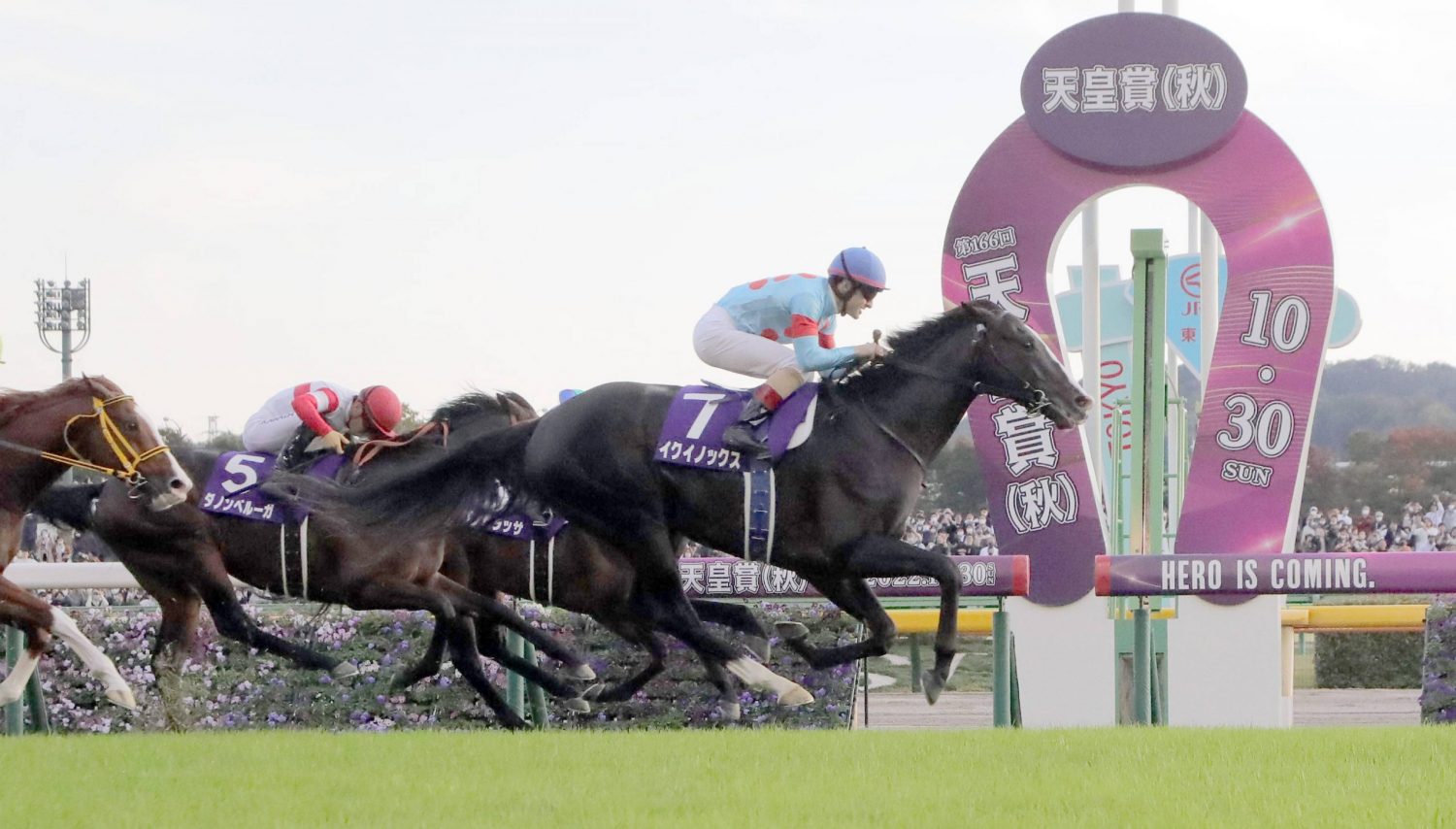 Christophe Lemaire and Equinox reach the wire to win the 2022 Tenno Sho (Autumn) on October 30 at Tokyo Racecourse. (ⒸSANKEI)

The 67th Arima Kinen (The Grand Prix), a 2,500-meter, Grade 1 race on turf, at Nakayama Racecourse in Funabashi, Chiba Prefecture, will be held on Sunday afternoon, December 25. JAPAN Forward will be closely watching up-and-coming 3-year-old Equinox.

The following article from the Weekly Gallop highlights Equinox's preparations for the Christmas Day race.

It has been nearly two months since Equinox's long-awaited first Japan Racing Association Grade 1 victory in the Tenno Sho (Autumn) on October 29.

Now, Equinox, who has a genius streak in his veins, sets his sights on The Grand Prix stage, where he will once again face off against the best of the older horses.

In the Tenno Sho (Autumn), while the front-running Panthalassa was showing great tenacity, Equinox came up from the outside and chased him down with a speed of 32.7 seconds over three furlongs. He closed the gap vigorously and firmly overtook Panthalassa.

Trainer Tetsuya Kimura commented, "It was such a special turn of events, but I think it was wonderful that he won by a length at the end, not by a nose. To be honest, there were moments when I thought we would finish second again. I was relieved with the result."

The week after the fierce race, the horse was moved to Northern Farm Ten-ei in Fukushima Prefecture, where he was carefully checked for injuries and fatigue on the body and legs. After discussions with the owner, the team decided to forego the Japan Cup, which was held on November 27, and set its sights on the big race at the end of the year.


Preparations for the Arima Kinen

Equinox returned to the stables on December 1, and his main jockey, Christophe Lemaire, rode him in the workout on December 14, a little more than one week prior to the Arima Kinen.

In the deep early morning mist, he timed 112.9 seconds for eight furlongs and 12.0 seconds for the last furlong on the woodchip flat course.

When the jockey asked the chief trainer, "How did we do?," he gave him a thumbs-up with a smile.

"The horse was trained the same as usual from the front of the stands," Kimura said.

He added, "The workout was exactly as we wanted it to be, including the overall time. At the time of the Tenno Sho, his appetite only stabilized about 10 days before the race. In that respect, I feel that his physical condition itself is more stable this time."

Offering further analysis of Equinox's condition, Kimura mentioned the following: "In the early spring, he had skin problems and the amount of food he ate fluctuated from day to day, but these things have ceased to be the case."

On the other hand, the trainer still feels that Equinox's back and hips could use some more muscle development, but overall, the horse is certainly on a steady growth curve.

Before Tenno Sho, his trainer said, "Equinox is like a kid who needs to be listened to when he comes home from school, but he is a genius.

"He showed his genius in the race, but even after becoming a G1 winner, 'conversation' is still an important part of his daily routine. 'Can you go to school [training] today? Did you eat well?' I talk to him like that every day," Kimura added, laughing.

"He's getting a little more confident, and he's starting to show some toughness now and then," he said with a smile.

Nakayama Racecourse's 2,500-meter turf is known as a tricky racetrack, but the first priority is to get the horse in good condition.

"No matter what the course is like, the way we manage our horses doesn't change much," Kimura said. "The first priority is to improve the condition of Equinox. I think that is the only thing we should focus on.

"Unlike the Japanese Derby in the spring, at Tenno Sho we were able to improve his start out of the gate. This in itself was due to the fact that he was in good physical condition."

Detailed descriptions of how Kimura is getting Equinox ready for the big race also revealed the trainer's earnest efforts.

"We will continue to do our best this time as well, exploring various things, such as the amount of training we do and what kind of harness we use," he said. "The workout one week before the race was successfully completed … [but] we want to make the most of each day and make sure that Equinox is in good shape for the day of the race."

Kimura also highlighted fan support bestowed on Equinox, who received the third-most votes, nominating him to compete in the race.

"We are encouraged by the number of fan votes and the letters of support we receive at the stables," the trainer noted.

He added, "We want to prepare well for the race so that we can live up to everyone's expectations."

If Equinox wins the Arima Kinen, the JRA Horse of the Year title will be in sight. The stables will put all their efforts into sending the budding genius off in perfect condition.

This story was first published on December 19 in Japanese by our media partner Weekly Gallop, a magazine specializing in horse racing under the umbrella of The Sankei Shimbun Co. as a Sankei Sports Special Edition. Launched in October 1993, the popular magazine is loved by many Japanese horse racing fans.