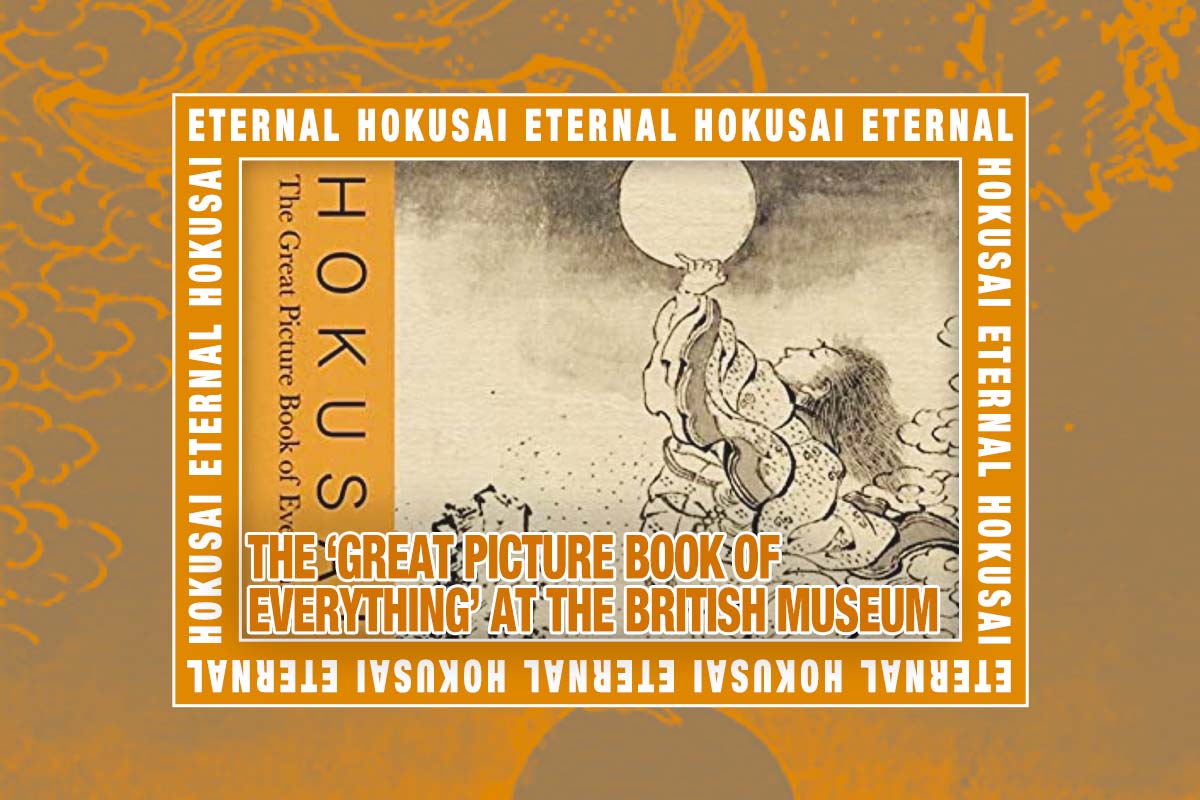 Book Cover, Hokusai: The Great Picture Book of Everything, by Timothy Clark Published by the British Museum.

A total of 103 newly discovered sketches by Katsushika Hokusai (1760–1849) will be exhibited for the first time at the British Museum from September 30, 2021 – January 30, 2022. The exhibition is named after the publication that these sketches were made for: The Great Picture Book of Everything (British Museum Press, 1st Edition September 30, 2021)

If you are a Hokusai fan, and haven’t been infected with COVID-19, you will probably want to fly over and visit the British Museum right away to see these works that have never been exhibited before.

These sketches have never been displayed because the picture book had remained unpublished until now. Fortunately, the sketches survived and ended up overseas.

For a long time, the sketches were in the possession of a French collector. Then in 2019, the British Museum purchased them. They were first shown online, and then after research and study, the time finally came to display them in the Museum.

The exhibition is particularly interesting because Hokusai is said to have sketched these pieces in 1829 when he was about to turn 70 and suffered from palsy. In general, palsy is the aftereffect of a stroke, and it is accompanied by symptoms of partial paralysis.

If a ukiyo-e artist could not hold a brush, it would be the end. According to Hokusai’s Biography （Iwanami Shoten, 1999), Hokusai was cured from this partial paralysis by drinking a citron infusion.

Hokusai, who was famous for his prolific works, produced few works during this period, and it has been said that his illness was the main cause for this. However, the existence of 103 works shows that Hokusai did not let his illness get the better of him and continued to remain active. As the works are small, he must have taken great care to draw them as if they were miniature works.

When I heard about the purchase of the 103 sketches by the British Museum, I was impressed by Hokusai’s spirit and thought that he must have drawn these works to defeat his illness and rehabilitate himself.

After overcoming his illness and entering his seventies, Hokusai produced various series of masterpieces such as “Thirty-six Views of Mount Fuji” and “One Hundred Views of Mount Fuji. The global nature of his subjects is also interesting. They include diverse subjects with themes from China, Korea, India, the Netherlands, Portugal, Vietnam, and the Philippines.

In my recent book, Katsushika Hokusai, Journalist of the Edo Period (Kokudo-sha,2021), I term Hokusai a cosmopolitan. Hokusai’s interest was not only in landscapes, flora and fauna, everyday life and the supernatural, as seen in his “Hokusai’s Sketches,” but also in life beyond Japan’s borders, even though the country was closed to the outside world.

Since ukiyo-e was a commercial enterprise in which the subject was adjusted to the demand of ordinary people in Edo, Hokusai’s sketches reveal how people were very interested and curious about foreign countries at the time.

There is an illustration by Hokusai that depicts the Nagasaki-ya in Nihonbashi, where the head of the Dutch trading post Dejima in Nagasaki and his party stayed when they visited the shogun in Edo. The composition is very interesting. People are shown gathering in front of the inn to peek at the foreigners inside the Nagasaki-ya, as the manager looks down with interest on the scene from an upper floor. Hokusai pays attention to both groups, and the image reminds us that the opening of the country is approaching. His image of Japanese people filled with curiosity is imbued with humor and relates to us today.

I wonder if Japan’s isolation in Hokusai’s days was as complete as many say, or if it was a selective closure (and opening) of the country on a case-by-case basis. In recent years, there has been a reexamination of that national isolation policy (or sakoku in Japanese), questioning its nature. The exhibition may further illuminate us.

It is also interesting to note that these sketches, which may not have been intended to remain in existence, were left behind and eventually ended up in Europe. Perhaps the exhibition will further enlighten us about how this happened.

I also hope that the number of Hokusai fans will continue to rise in the United Kingdom.