[Eternal Hokusai] The Edo Journalist: What His Art Conveys to Us 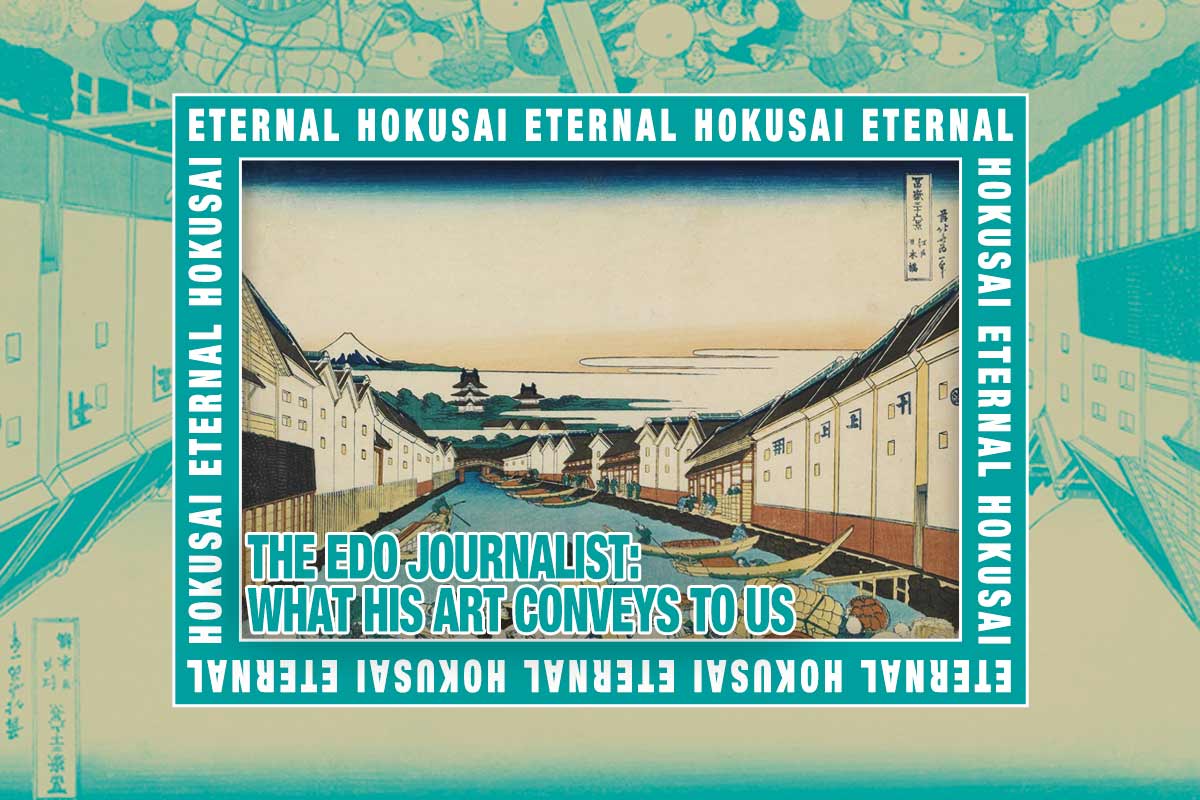 Nihonbashi Bridge in Edo, by Hokusai, from the series Thirty-six Views of Mount Fuji

In his postscript to One Hundred Views of Mount Fuji, published in 1834, Hokusai wrote, “I have been recreating the shapes of things since I was only six years old.” And one of his last paintings, an original drawing Fujikoshi no Ryuzu, was completed only 4 months before he died at the age of 90.

When Hokusai woke up in the morning, he sketched all day long until he went to bed at night, except when he took time to slurp buckwheat noodles to assuage his hunger and sleep when he was tired. Thus, he drew and painted prolifically, creating no less than 30,000 works.

During Japan’s period of social turbulence in the last years of the Edo Bakufu (feudal) government (1603-1867) to the Meiji Restoration (1868), many of Hokusai’s paintings and prints were dispersed around the world or otherwise lost. So even today it is believed there are unknown Hokusai artworks waiting to be discovered somewhere in the world and make news. It is as if Hokusai is saying from the afterlife, “Don’t forget about me.”

Reporting the Life of His Times

In addition to his many artworks, Hokusai sketched just about anything that he saw. This is evident in his masterpiece, Hokusai’s Sketches, where he indeed depicts everything and everyone he seemed to have come across.

As a great artist, Hokusai was not fussy or picky. For Hokusai, all shapes and forms of things were interesting, which is why he believed they must be turned into pictures. He was a man of great curiosity.

When his illustrated book, One Hundred Views of Mount Fuji was published, Hokusai took on the artist name, “Old Man Mad About Painting,” in which he declared his passion for drawing. He also included the auspicious “manji” character in his name, which shows his wit and the fact that he cannot be overlooked.

Hokusai did not change his professional name as an artist as often as he moved residences during his life (93 times), but he did take on many names. Following his debut as an ukiyo-e artist under the name of Katsukawa Shunro at the age of 19, he was known as Tawaraya Sori, Hokusai Tokimasa, Taito, Iitsu, Katsushika Hokusai, and Gakyo Rojin (Old Man Mad About Painting). He was not the kind of artist who clung to a single pseudonym or school.

I have recently published a book titled Katsushika Hokusai,  Journalist of the Edo Period (Kokudo-sha, 2021), which focuses on the human being behind the master artist.

You might ask: “Were there already journalists during the Edo period?” The moment I saw Hokusai’s folding screen with an image of the renowned court poet and beauty Ono no Komachi, with white hair at an old age, at the Hokusai Museum in Obuse (Nagano Prefecture), I was struck by Hokusai’s piercing gaze and realism in this image. I felt as if he were a journalist.

It made me want to write a book with this as the starting point, from the perspective of Hokusai the journalist. So I followed his footsteps to understand his personality, lifestyle, and painting career.

The Journalist Among Ukiyo-e Artists

The genre of ukiyo-e, which reached its golden age during the late 18th century, generally focused on people’s daily lives. From a modern perspective, ukiyo-e is the genre of art most like journalism. And probably no ukiyo-e artist was more like a journalist than Hokusai.

For example, Utagawa (also known as Ando) Hiroshige is famous for his print series Fifty-three Stations of the Tokaido Road. Hokusai also depicted these stations, but the two artists’ styles could not be any more different. While Hiroshige’s pictures of the stations of the Tokaido Road are like beautiful postcards full of lyricism, Hokusai’s depictions are down to earth. In Hokusai’s work the eye is focused on the bustle of the road, and even the chatter of the travelers seems to be audible.

The Edo period was a time when Japan’s civil wars finally came to an end and peace and stability lasted longer than any other period in Japanese history. This spurred a love for travel among Japanese that resulted in a travel boom.

A little apprentice boy who was sweeping in front of a store threw away his broom and joined a procession of pilgrims on their way to Ise Shrine. In Hokusai’s image of a ferry crossing titled Travel Along the Tokaido Road, the expressions of the people depicted are lively and dynamic, full of the joy of travel.

Hokusai was like a journalist who captured the essence of current events and conveyed them to his audience. Moreover, he himself was also fond of traveling. Therefore, even in his late 80s he visited Obuse, 250 Km away from Edo, at least four times. He stayed there to draw and left behind many paintings, including magnificent ceiling paintings of dragons, raging waves, and phoenixes for festival stalls and temples. These artworks show the prosperity of Obuse in the past and convey it to us in the present.

Hokusai’s Influence in the West

There is still more to discover of Hokusai’s work. Although the Tokugawa samurai government imposed a system of national seclusion, some of Hokusai’s art that was commissioned by the Dutch trading post at Dejima in Nagasaki, was sent to Europe and became the foundation for Hokusai’s reception abroad.

Hokusai, who was full of curiosity, must have visited the usual lodgings when the head of the Dutch trading post came to Edo to pay respect to the Tokugawa shogunate government. An image Hokusai designed depicts the lodgings with the visiting head of the Dutch trading post, and the people of Edo trying to catch a glimpse of the Europeans inside. The image almost seems to convey the premonition that the “closed country” system would soon collapse.

Ernest Fenollosa, an American scholar of Asian art, was very critical of Hokusai at first. However, as he came into contact with many of Hokusai’s paintings, he began to praise him, and eventually described him as, “a unique voice crying out from the wilderness like a prophet.”

I believe that Hokusai was not only a prophet, but also a journalist whose work has continued to bear witness to his times. When you get to know Hokusai as a person and look at his art, you can feel his spirit of “observing and reporting on everyone and everything.”