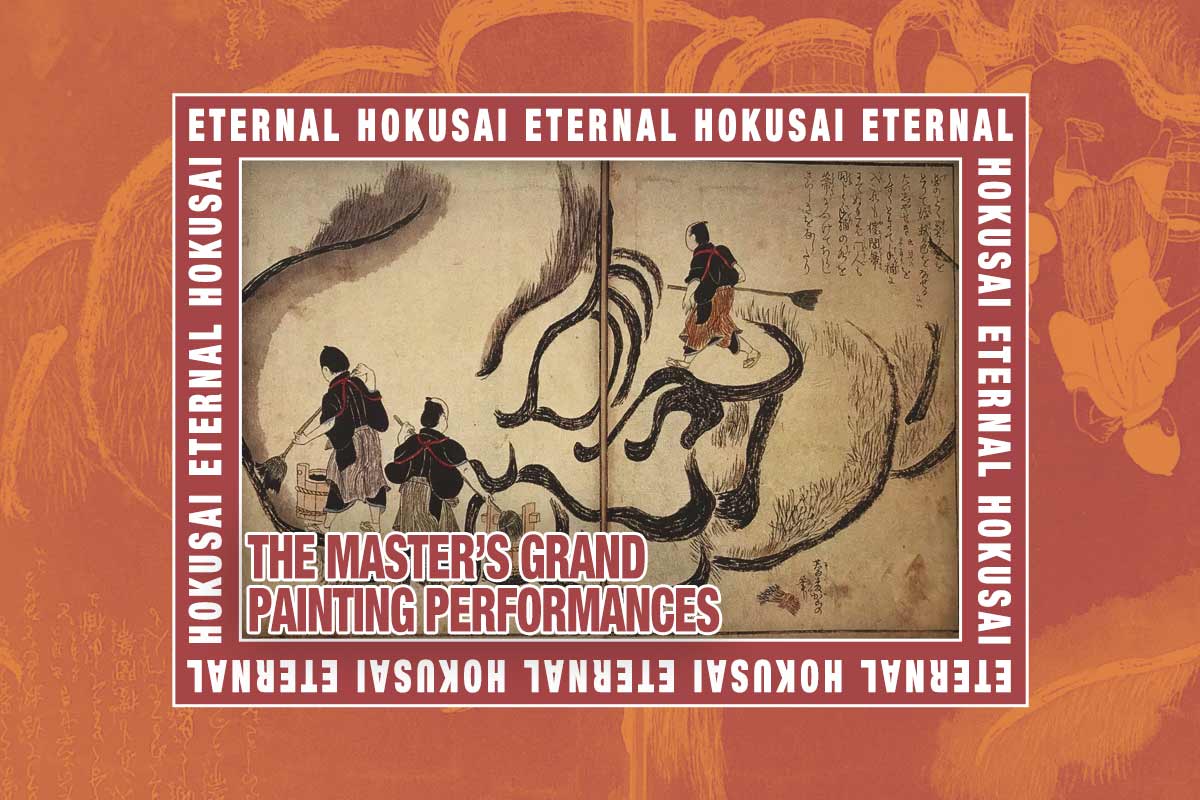 Sketchbook of an impromptu painting performance by Hokusai (1817) showing Hokusai’s assistants finishing the painting of Bodhidharma.

In the previous installments of [Eternal Hokusai], I’ve discussed Hokusai’s influence outside Japan, his accomplished designs, the religious context of his art, his obsession with waves, and his recently rediscovered sketches. However, an important aspect that has gone unmentioned so far is the master artist’s personality.

As for most artists who lived over a hundred years ago, it is hard to really know Hokusai. But thankfully many anecdotes and legends concerning his personality have been passed down to us.

Historical records and anecdotes tell us that Hokusai was a very eccentric figure. He is known, for instance, to have moved his place of residence more than 90 times in his 90-year life. Supposedly, he rarely cleaned, and when his house became too dirty, he would move to a new home.

Possibly the only thing he did more often than moving residence was changing his professional name. Hokusai signed his works with nearly a hundred different names. The most eccentric of them is probably “Old Man Mad About Painting,” which also became the name of a year-long Hokusai exhibition at the Freer Gallery of Art and Arthur M. Sackler Gallery from November 2019 to November 2020.

It goes without saying that Hokusai’s idiosyncratic personality must have led to outbursts of creativity. At least two stories providing accounts of such outbursts survive.

In an earlier installment of [Eternal Hokusai] I’ve mentioned that Hokusai was an artist with patrons in high places. One day, he was invited to the court of the Shogun Tokugawa Ienari (1773-1841) to engage in a painting competition with the popular artist Tani Bunchō.

When his turn came to draw, Hokusai painted a few blue lines on a long sheet of paper, and then, dipping the feet of a chicken in red paint, chased it across the paper, making the animal’s red footprints his autumn leaves. He then told his audience that this large painting depicted the Tatsuta River in Nara, which was known for floating maple leaves flowing down the river in late autumn.

Unfortunately the painting of this famous legend does not survive, although Hokusai did design a print showing the Tatsuta River based on a famous poem by the courtier Ariwara no Narihira.

However, we do have records of another one of Hokusai’s grand painting performances.

During a visit to Nagoya in 1817, Hokusai engaged in a public display, and started drawing a painting of about one hundred twenty tatami mats (one tatami mat measures one by two meter, or about three by six feet). Because Hokusai painted the picture flat on the ground, his audience had difficulty understanding what he was painting at first, but once he finished, and his assistants completed the work, they understood Hokusai had painted an enormous portrait of the legendary Zen monk Bodhidharma.

Hokusai’s spontaneous performance was recorded in various sources. The first, a broadsheet, includes an illustration of Hokusai’s Bodhidharma and mentions that it was painted by “a visitor from the Eastern Capital named Hokusai.” Aware of the importance of advertising his art, the image of this broadsheet was designed by the master himself.

The event is also touched upon in an illustrated book by the artist Kōriki Tanenobu. Two pages in the feature photo at the top of this article show Hokusai’s assistants finishing the painting of Bodhidharma. Two more, below, show the audience looking at Hokusai’s design in awe.

It was not Hokusai’s first time to paint a giant Bodhidharma, he had painted a similar work at Gokokuji Temple in Edo (present-day Tokyo) in 1804. In the Edo period (1603-1868), sekiga, or the art of impromptu paintings for private or public audiences, became increasingly popular. Artists engaged in sekiga upon the request of their patrons or to entertain one another. They generally created such works when traveling, and the images increased their fame.

In Europe and the U.S., painting as a performance was a modern phenomenon that reached its height in the post-war era. But about a century and a half earlier, Hokusai was already pouring his creativity into grand painting performances to showcase his talents and advertise his art to potential patrons and the common people. While he was not the first to engage in these grand painting performances, his demonstrations may have been some of the most spectacular of his day.