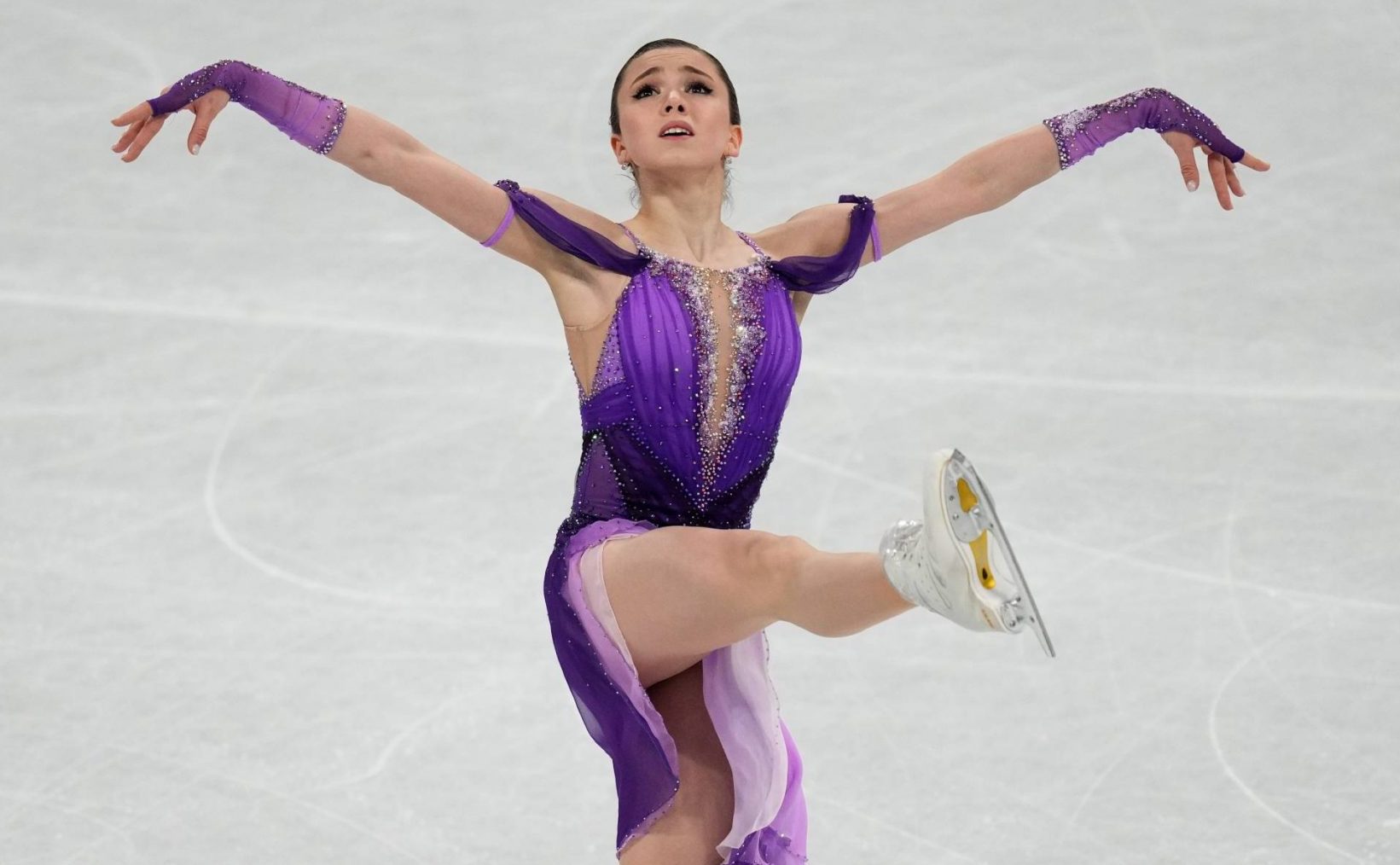 Kamila Valieva skates in the women's short program at the Beijing Olympics on February 15. (Bernat Armangue/AP)

Embattled Russian Olympic Committee star Kamila Valieva is in the lead after the women’s short program on Tuesday night, February 15 at Capital Indoor Stadium, despite what for her was a below-average performance.

Valieva, who was only cleared to participate on Monday after prevailing in a ruling by the Court of Arbitration for Sport over a doping violation, is on top with a score of 82.16 points.

World champion Anna Shcherbakova, Valieva’s teammate, is in second place with 80.20, while Japan’s Kaori Sakamoto is third at 79.84 after a stellar showing.

Alexandra Trusova, a two-time world junior champion and another teammate of Valieva, is fourth on 74.60, while Wakaba Higuchi stands in fifth at 73.51.

An Emotional Night for Valieva

The 15-year-old Valieva skated to “In Memoriam” and botched her opening triple axel. She recovered to land a nice triple flip and went on to hit a solid triple lutz/triple toe loop combination jump.

Valieva, the world junior champion in 2020, earned level fours for her spins and step sequence. She wept as she finished her program and again when she came off the ice.

The controversy over Valieva’s positive test for trimetazidine has cast a pall over the Olympics, with many in the skating community believing it unfair that a competitor who failed a drug test is being allowed to compete under any circumstances.

Valieva did not appear at the press conference after the short program or give quotes in the mixed zone.

Shcherbakova competed to “Dangerous Affairs” and was consistent from start to finish. She began with a double axel, followed it with a triple flip and went on to land a triple lutz/triple toe loop combo. The 17-year-old received level fours for her spins and step sequence.

“I realized how important this skate was and I tried to pay attention to every detail,” Shcherbakova commented. “There were small mistakes, but overall I am happy with how I skated today. I’m going to be in full fighting mode [in the free skate].”

Sakamoto was the surprise of the evening, putting out a wonderful effort to “Now We Are Free” that greatly impressed the panel of judges. The 21-year-old started with a double axel, followed by a triple lutz, and went on to land a big triple flip/triple toe loop combo.

Sakamoto, a Kobe native, posted level fours for her spins and step sequence and will have a legitimate chance at a medal in Thursday’s free skate.

As her scores were posted, Sakamoto became very emotional, and covered her face in front of the TV camera in the Kiss and Cry.

“I was very nervous to be honest with you,” Sakamoto admitted.

“I was quite motivated to make a big impact as the last skater. I had a very strong desire to do my best, and because I had such strong feelings, I think this led to a high level of nerves for me tonight,” Sakamoto remarked.

Sakamoto said she has been consulting remotely with choreographer Benoit Richaud while she is in Beijing.

“Off ice I was actually communicating with Benoit to brush up on the details of the performance and presentation,” Sakamoto noted. “I was able to really focus until today, until the very moment I got on the ice.”

Sakamoto was asked about whether or not Valieva should have been allowed to skate, but declined to comment on the matter other than to say “I don’t feel sorry for her.”

Trusova fell on her opening triple axel, but recovered and skated well the rest of the way to keep herself in the medal picture.

“It was awesome. I enjoyed each move, each element,” Trusova said of her performance. “In Moscow in training it (the triple axel) was very consistent. I hit it all the time. Here, in training, it wasn’t going so well.”

Higuchi landed her opening triple axel to “Your Song,” but under-rotated the back end of her triple lutz/triple toe loop combo, and was judged a quarter rotation under on her triple flip. The 21-year-old from Tokyo received level fours on two of her spins and step sequence.

“I am actually quite satisfied with my triple axel, but I think it was a pity because one of the jumps got downgraded,” Higuchi remarked. “The score was not as high as I expected, and I think that is the only regret I had for this performance.”

Higuchi talked about her plan for the upcoming free skate.

“I think for the free skate, I just want to keep the focus on all the elements and keep working the grade (of execution) and do it well,” Higuchi said.