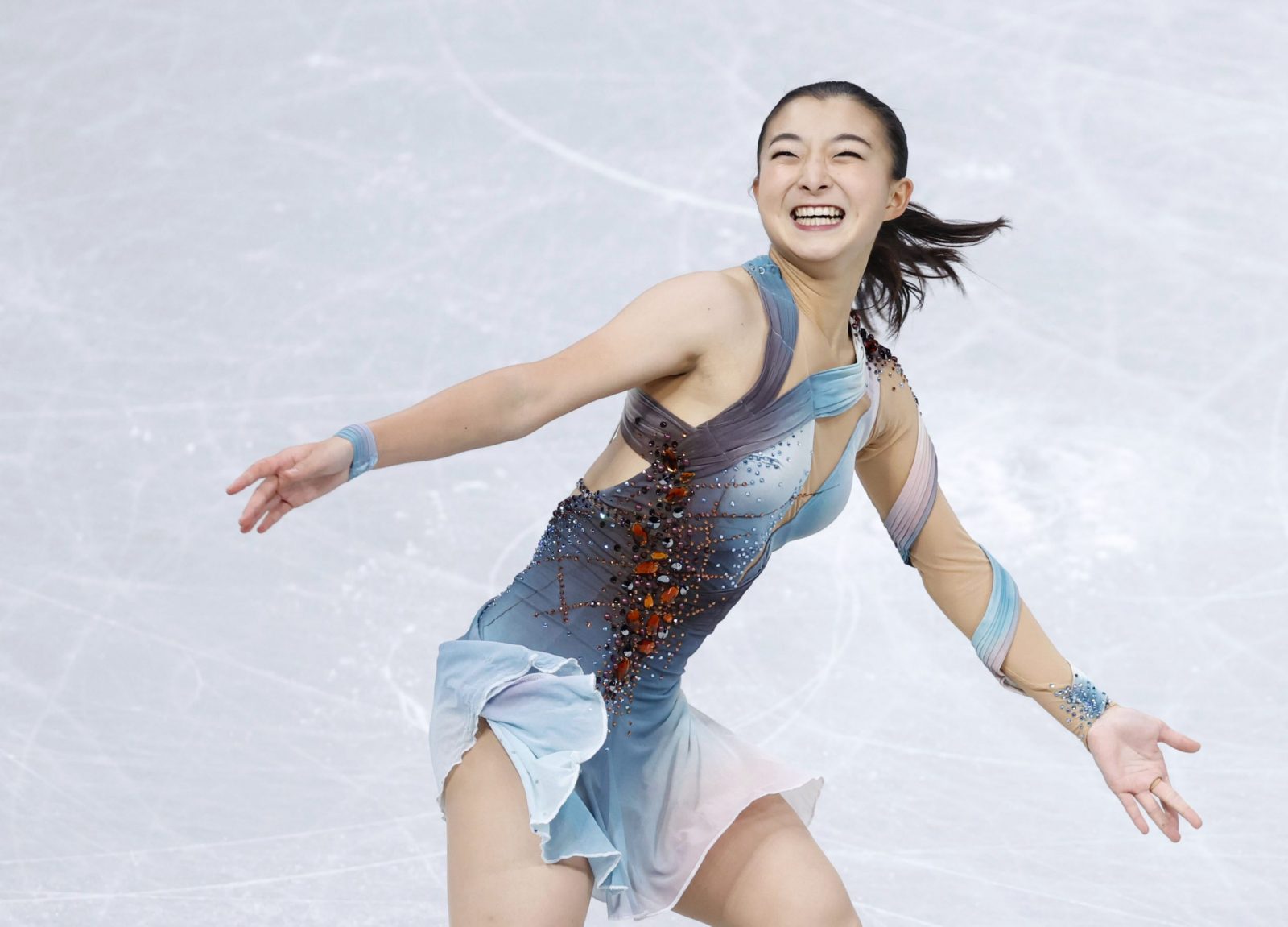 Kaori Sakamoto competes in the women's short program at the Japan Figure Skating Championships on December 23 at Saitama Super Arena.

The 21-year-old Sakamoto, who finished sixth at the Pyeongchang Olympics, earned a score of 79.23 points and will take a more than four-point advantage into Saturday’s free skate.

Sakamoto skated to “Now We Are Free” and showed her veteran poise as she calmly and smoothly moved through her program. She began with a double axel followed by a triple lutz, before going on to hit a nice triple flip/triple toe loop combination on the way to earning level fours for her spins and step sequence.

“I was really nervous for a week before this, and even entering the venue I felt the same, but it didn’t interfere with my skate,” Sakamoto stated. “Wakaba and I chatted in the changing room and relaxed each other.”

Higuchi competed to “Your Song” and opened with a double axel and a solid triple lutz/triple toe loop combo. She also landed a triple flip and posted level fours on her spins and step sequence.

“I’m glad I was able to finish the first day without any mistakes,” Higuchi commented. “I was nervous but calm. I did my best with the goal of skating well.”

Kawabe hit the lone triple axel of the night in her skate to “Shadow 1” and “Winter 5.” The 17-year-old landed the axel with her opening jump, before executing her triple flip/triple toe loop combo and adding a triple loop. A podium finish here could put Kawabe, who also notched level fours on her spins and step sequence, on the Olympic team.

Still in the Running

Miyahara, who was fourth in Pyeongchang, is a longshot to make Japan’s squad for the Beijing Olympics, but is hanging tough. She under-rotated the back end of her opening triple lutz/triple toe loop combo.

“I’m glad I came in with a feeling of tension,” Miyahara remarked after her skate to “Song for the Little Sparrow. “I think there is a lack of [jump] rotation. I’m glad I scored in the 70s.”

Mihara was sublime in her skate to “I Dreamed a Dream” and received level fours on her spins and step sequence and a standing ovation from the audience.

“This was my personal best in terms of points,” Mihara noted. “My coach said it was good. I was told I could do it before I skated.”

Matsuike, last season’s junior titlist, competed to “A quoi ca sert l’amour” and was pleased with her effort.

“I was happy to be able to score over 70 points,” Matsuike stated. “I wanted to do that without mistakes. Several skaters are in the 70s, including Sakamoto’s amazing score.”

In the afternoon, three-time champions Misato Komatsubara and Tim Koleto took the lead in ice dance with a tally of 68.16 in the rhythm dance. Kana Muramoto and Daisuke Takahashi are in second with 63.35 heading into Saturday’s free dance.

The Japan Championships will continue on Friday with the men’s and pairs short programs. Two-time Olympic champion Yuzuru Hanyu will make his season debut as the 24th skater in the evening.