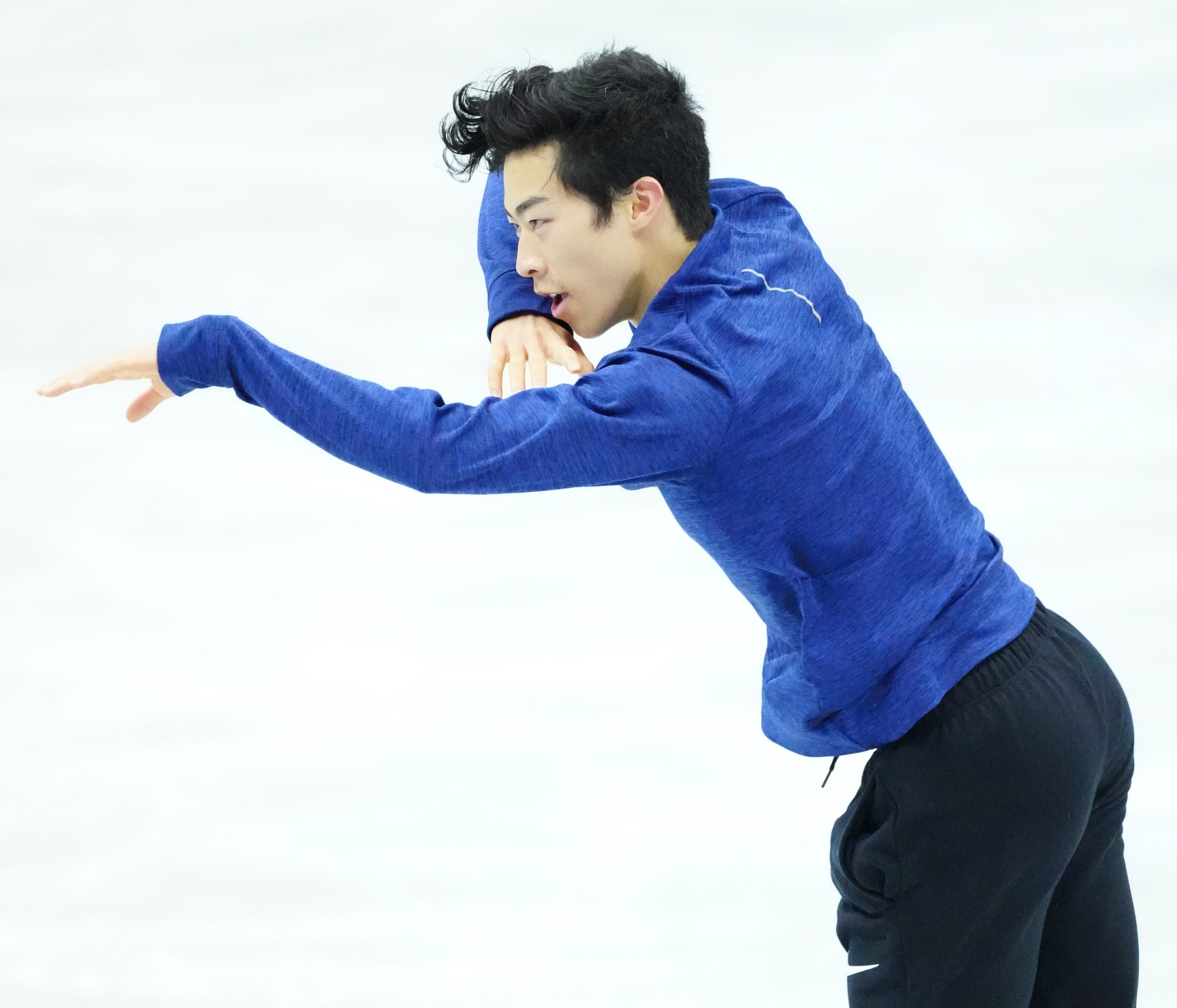 Nathan Chen in action on the opening day of the World Team Trophy in Osaka.

Shoma Uno struggled and is in ninth with 77.46.

Russia has the overall lead in the competition with 49 points, while the United States is second with 47 and Japan third on 42.

The leader in each discipline earns 12 points, with second place getting 11 and third place 10 and so on in descending order.

World champion Anna Shcherbakova and world silver medalist Elizaveta Tuktamysheva provided a 1-2 punch in the women’s short program that helped put the Russians atop the standings.

Chen skated to “Asturias” and looked every bit the three-time world champion he is. He opened with a big quadruple flip, then landed a triple axel, before hitting a quad toe loop/triple toe loop combination in the second half of the program.

Chen earned level fours on his spins and step sequence, and finds himself in much better place than he was after the short program at the world championships, where he had to rally from third place to win.

“It was nice to skate in front of an audience for the first time this season,” Chen stated. “I really enjoyed it. It almost felt like an exhibition. My goal here is to enjoy myself and help my teammates.”


Hanyu skated to “Let Me Entertain You” and started with a beautiful quad salchow, followed by a quad toe loop/triple toe loop combo. He might be in the lead but for an awkward landing on his triple axel.

The superstar received level fours on his spins and step sequence.

“I heard the announcement that Uno’s score was not good, but I think he slipped because of his power and soul,” Hanyu commented. “Just don’t worry too much about yourself I thought. I could contribute to the total with my own score.”

Hanyu said he was pleased with his effort.

“I thought that I was growing because I was able to do the quad salchow and quad toe loop for the first time this season,” Hanyu remarked.

Brown put on a rousing performance to Nina Simone’s “Sinnerman” and earned a standing ovation from the audience when he finished.

Uno had a calamitous outing than began with a quad flip that earned negative grades of execution. He then fell on his planned quad toe loop/triple toe loop combo and received negative GOE on his triple axel.

“I definitely got stuck tonight,” Uno said. “I was keenly aware of the importance of practicing not only jumping, but also connecting and spinning. I don’t think can I stand this [performance].”

Shcherbakova was absolutely sublime to “O doux printemps d'autrefois.” Exuding elegance, she opened with a double axel and triple flip, and went on to land a triple lutz/triple loop combo. Shcherbakova earned level fours on her spins and step sequence.

“This was the year’s last [short program] performance and I didn’t force anything,” the 17-year-old Shcherbakova said. “I wanted to have fun on the ice and I managed to do that. I probably could have been better if I were to nitpick, but I’m not too concerned at the moment.”

Tuktamysheva skated to “Lovely” and began with a big triple axel, then hit a triple lutz/triple toe loop combo, before landing a triple flip. She got level fours on two of her spins and step sequence.

“I was very pleased with my program today,” Tuktamysheva commented. “I felt relaxed and liberated and I’m very happy to be here. I hope to have a clean free skate and go into it with confidence.”

Sakamoto performed to “Bach a la Jazz” and looked confident while hitting a double axel, triple lutz and triple flip/triple toe loop combo. She posted level fours for her spins and step sequence.

Sakamoto was pleased with her triple lutz after working on it extensively recently.

“I’m really happy that I was recognized this time [by the judges],” Sakamoto commented. “I asked my coach to shoot videos from various angles. I was trying various methods in detail. I want to continuing practicing the lutz.”

It was another disappointing outing for Kihira, as she fell on her opening triple axel to “The Fire Within.” She went on to land a triple flip/triple toe loop combo, with the back end on the quarter, and a triple loop. She received level fours for her spins and a level three for her step sequence.

“The axis was tilted toward the back,” Kihira noted of the fall on the axel.

“I thought the timing could not be adjusted, so I hope I can get it right for the free skate,” Kihira commented.

The Russians also lead in ice dance, with Victoria Sinistina and Nikita Katsalapov scoring 86.66 in the rhythm dance. Italy’s Charlene Guignard and Marco Fabbri (82.93) are second, with Kaitlin Hawayek and Jean-Luc Baker (76.79) of the U.S. in third.

Japan’s Misato Komatsubara and Tim Koleto are in fifth place with 66.42.