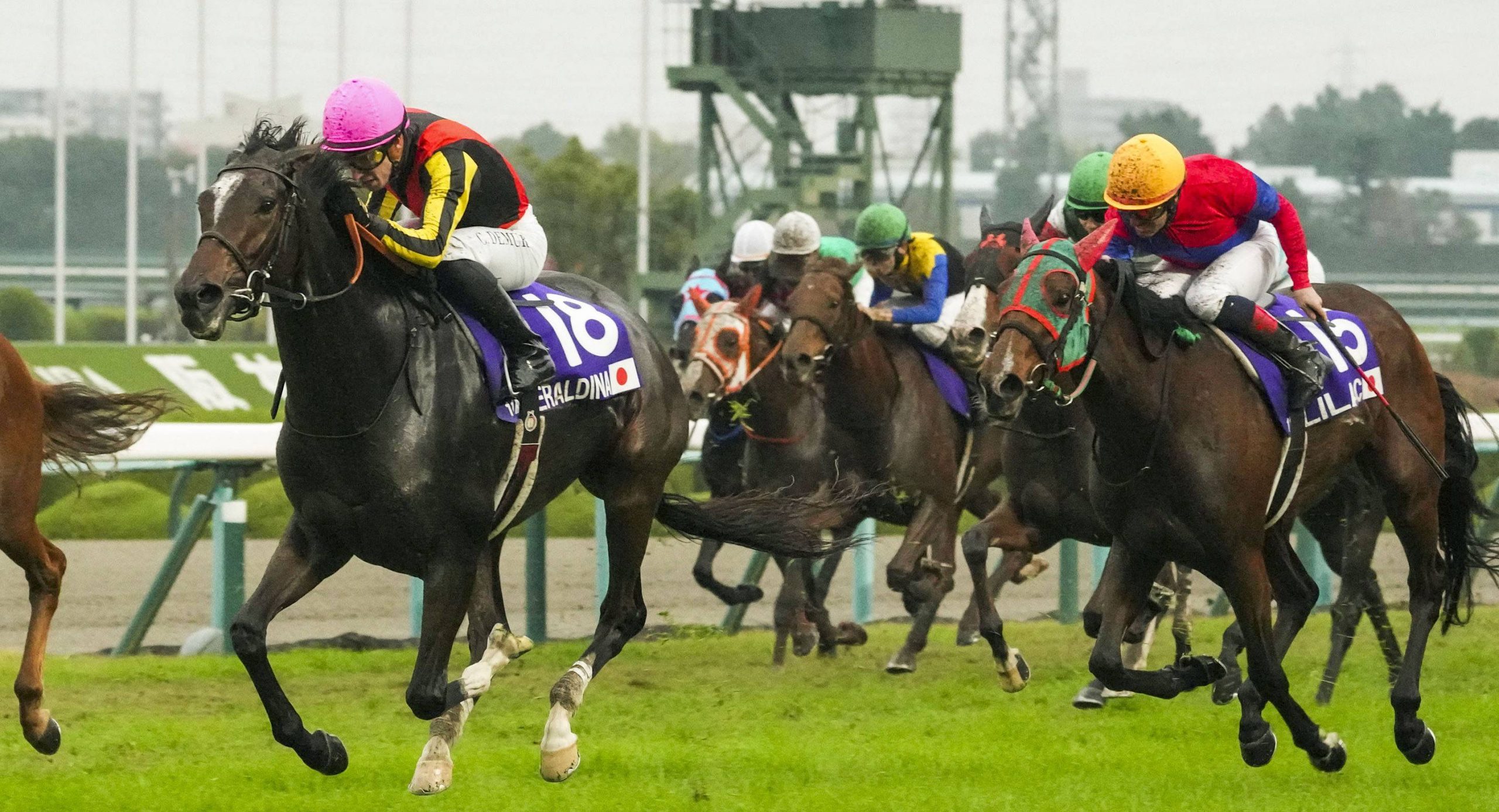 Cristian Demuro guides Geraldina (18) to victory in the 47th running of the Queen Elizabeth II Cup at Hanshin Racecourse on November 13 in Takarazuka, Hyogo Prefecture. (KYODO)

The defining moment of the 47th running of the Queen Elizabeth II Cup occurred in the final 200 meters, with Geraldina sprinting a split-second faster than any of the other 17 horses in the field.

Geraldina, ridden by Italian jockey Cristian Demuro, was clocked in 35.4 seconds over the final three furlongs (about 600 meters) on Sunday, November 13 at Hanshin Racecourse in Takarazuka, Hyogo Prefecture. In the pivotal stretch of the race, open to fillies and mares ages 3 and up, Geraldina's speed and stamina secured the win, her sixth in 16 career starts, beating runners-up Win Marilyn (Damian Lane) and Lilac (Mirco Demuro, Cristian's older brother), who finished in a dead heat, by 1¾ lengths.

"I'm very happy I was able to win another G1 race," Demuro told reporters after earning the fourth Japan Racing Association Grade 1 victory of his career.

Before Sunday's triumph, his most recent G1 win was aboard Danon Fantasy in the 2018 Hanshin Juvenile Fillies.


For Geraldina's trainer Takashi Saito, it was his seventh career G1 victory.

Four-year-old Geraldina, who was assigned the 18th post on the far outside, moved toward the front of the pack late in the race and galloped to the wire from the middle of the turf track. (Watch the race here.)

"The filly was traveling very well in the last corner, came out and gave a good turn of foot," Cristian Demuro, 30, told reporters. "The last time when she won, it was a good race, so I was pretty confident with her. Gentildonna was a good filly and I think Geraldina can be like her dam."

Geraldina placed first in her previous race, the G2 Sankei Sho All Comers, on September 25 at Nakayama Racecourse.


No Repeat for Akai Ito

Rosa Noir (Katsuharu Tanaka) led for most of the race, but faded down the stretch and placed 13th.

"We were able to race in good position but she likes quick ground and the rain, unfortunately, took her chance away," Irish jockey Shane Foley said later. "I urged her to go from the third corner but she didn’t respond. I don’t know why she didn’t want to go into the gate because she’s usually really good."

There are two more G1 races on the JRA calendar this month. The Mile Championship will be held on November 20 at Hanshin Racecourse, followed by the Japan Cup on November 27 at Tokyo Racecourse.