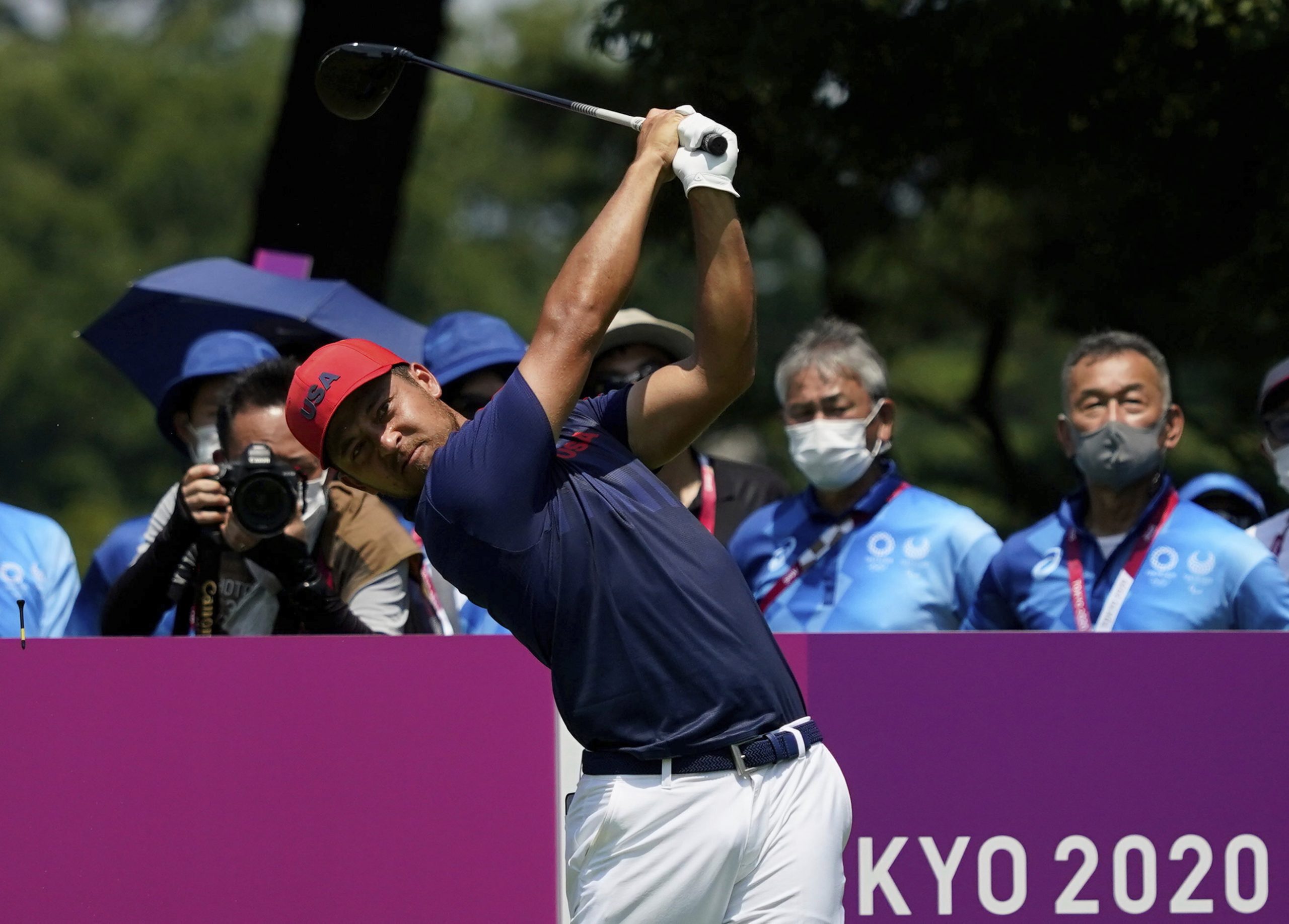 Xander Schauffele of the United States watches his tee shot on the second hole during the final round of the men's golf tournament at the Tokyo Olympics on August 1 in Kawagoe, Saitama Prefecture. (AP/Matt York)

American Xander Schauffele made two clutch putts on the final two holes to win the gold medal in the men’s golf tournament on Sunday, August 1, fending off Masters champion Hideki Matsuyama and Rory Sabbatini in a thrilling finish.

Schauffele made a 6-foot birdie putt on the par-4 17th to take the lead, then sank a 4-foot par putt on 18 for a 4-under 67 and a one-stroke win over Sabbatini.

There was some tension for Schauffele on 18 when his tee shot found the rough at the side of the fairway. His second shot landed 97 yards from the hole, setting up the shot of the tournament.

After his approach on 18 landed just four feet from the hole, the 27-year-old American calmly sank the par putt to secure the gold at 18-under par. It was the type of approach shot that would have brought roars of approval from the huge gallery that typically lines the 18 green at any major tournament.

But with strict COVID-19 measures in place there were only a smattering of officials and staff on hand to admire the shot.

“I think obviously winning a gold medal and representing our country is a big deal or else we wouldn’t be sitting here talking to you and answering these questions,” said Schauffele.

“If you look at other … athletes, track and field, swimming, judo, any other extreme athletes, this is the pinnacle. This is the most honorable thing and the biggest thing you can do for your country.”

Slovakian Sabbatini fired an Olympic-record 10-under 61 and finished one stroke back at 17-under to claim the silver medal. His stellar round at the Kasumigaseki Country Club in Kawagoe, Saitama Prefecture, featured 10 birdies, an eagle and two bogeys.

Matsuyama, who started the final round one stroke back of Schauffele, was in contention until the penultimate hole, but simply missed too many putts down the stretch and finished at 15-under after a 69 that included five birdies and three bogeys.

He missed a birdie putt on 17 that dashed his hopes of adding a gold medal to his Masters win. He finished with a 2-under par 69 tied for third and went to a 7-player bronze medal playoff.

Matsuyama, who was seeking to become the first Japanese, male or female, to win an Olympic medal in the sport, and Great Britain’s Paul Casey bogeyed the first playoff hole and were knocked out.

“I wasn’t able to perform the way I wanted to but it was good I was among the medal contenders. I thought I might catch up with the leader and even surpass him but that didn’t go so well, and it taught me what I need to work on,” Matsuyama said, according to Kyodo News.

Matsuyama and Schauffele played in the final group at the Masters, where Matsuyama started with a four-shot lead over Schauffele, whose mother was raised in Japan.

On 17, Matsuyama’s second shot out of the green side bunker landed six feet from the hole. Schauffele also hit out of the bunker and left himself with a similar birdie putt.

Matsuyama missed his putt while Schaufflele sank his to retake the lead by one stroke over Sabbatini heading to the final hole.

Matsuyama headed to 18 three strokes back but could have easily been two or even tied if his putting game was on.

It was a bitter pill for Matsuyama who had numerous chances to erase the deficit with Schauffele whose only bogey on 14 gave his challengers an opening.

Schauffele’s second shot on 14 went into the woods at the side of the fairway, forcing him to drop a ball and take a penalty.

His third shot landed in the rough short of the green. He made a nice approach to three feet but had to settle for bogey.

That left him in a tie for first with Sabbatini, who had already finished, with Matsuyama one stroke back. But Matsuyama couldn’t take advantage of Schauffele’s lone bogey.

After two birdies and a bogey on the front nine, Matsuyama appeared set to make a change with back-to-back birdies on Nos. 11 and 12, but a costly bogey on 13 and another on 15 hurt his chances.

The bogey on 15 was especially painful as he missed a 1-foot par putt.

Matsuyama tested positive for COVID-19 on July 2 and was forced to miss the British Open last month.