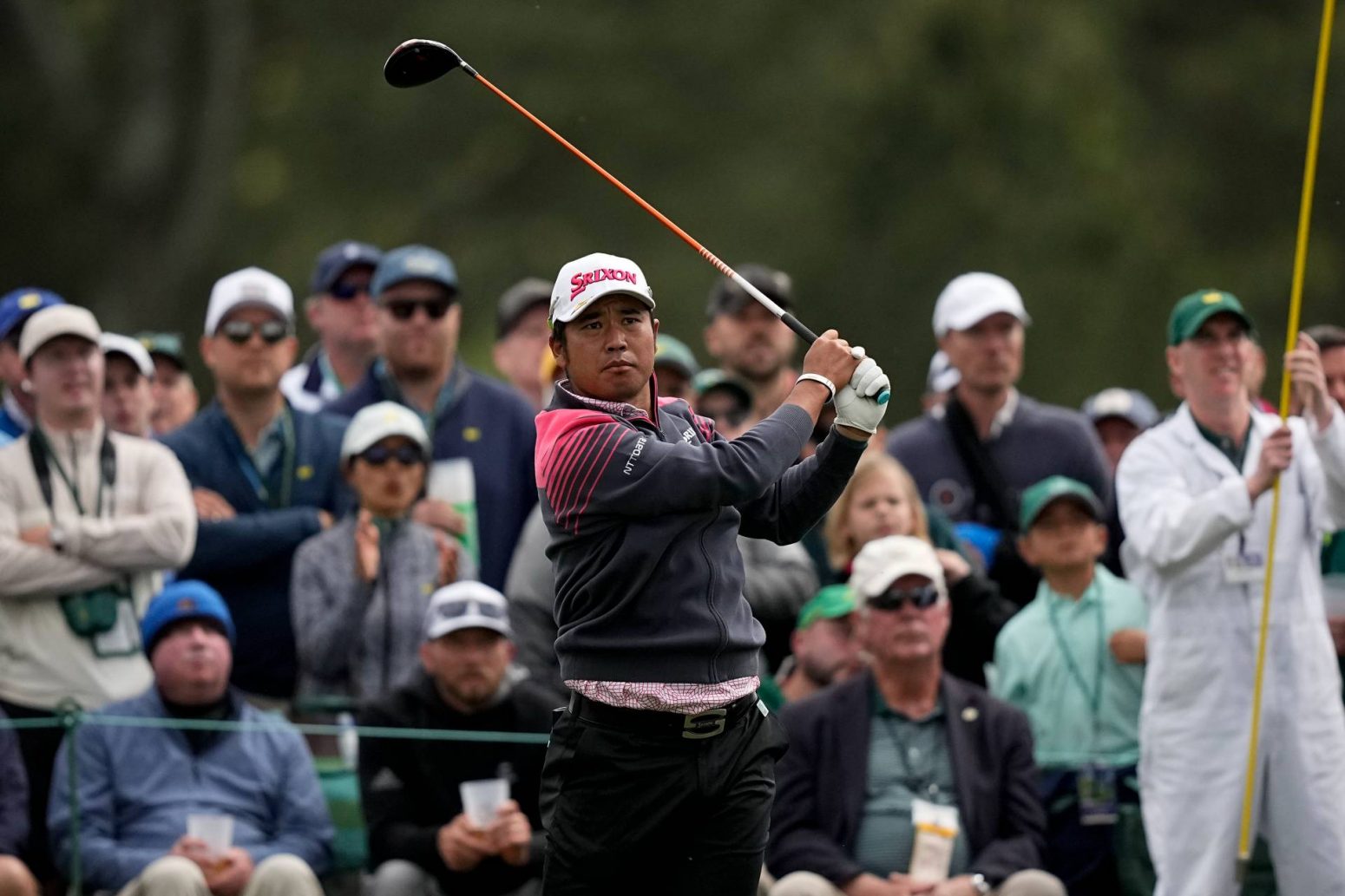 Hideki Matsuyama watches his tee shot on the eighth hole during the second round at the Masters on April 8 in Augusta, Georgia. (David J. Phillip/AP)

Defending champion Hideki Matsuyama had a better all-around performance in the second round of the Masters on Friday, April 8 than he did in the opening round.

Carding a 3-under 69, Matsuyama moved into a four-way tie for second place at Augusta National Golf Club. The pride of Ehime Prefecture shot a 72 on the first day, when the sports world was abuzz with Tiger Woods’ competitive return to golf.

American Scottie Scheffler held a commanding five-stroke lead at the midway point of the tournament. He opened with a 69 and carded a 5-under 67, putting him at 8-under 136.

“I feel like my game is in a good spot,” said Scheffler, who is ranked No. 1 in the world. “I’ve done a good job managing my way around the golf course the last two days, and I’ve made some really nice up-and-downs and key putts that have kept my rounds going. I’ve kept my cards pretty clean for the most part, which is nice.”

‘The Wind Was Crazy’

Gusts of wind made conditions on the course difficult and unpredictable for the golfers as they strategized and swung their golf clubs. (Only 13 golfers had below-par rounds.)

“To be completely honest, the front nine was such a grind. The wind was crazy. There were some times where we saw the sand blowing up out of the bunkers out there. It was ridiculous,” Scheffler said, describing the conditions in his post-round media session.  ”I think we were a little bit fortunate that it did die down a little bit towards the end of the day.”

Woods said, “Well, it was windy. It was swirling. Balls were oscillating on the greens. We got a couple of bad gusts. I hit a couple of bad shots. I hit a decent shot at 4 that ended up and down in a divot, and it was just like ― there were so many things that were not going my way. It was partly the conditions and partly me.”

Ever the ultimate competitor, Woods didn’t hide the fact that he has his sights set on contending for another title in Augusta, Georgia.

“Tomorrow is going to be an important day as cool and as tough as they’re predicting,” he said, describing weather conditions. “It’s going to be quick, and I need to go out there and put myself there.

“If you’re within five or six on that back nine going into Sunday, you’ve got a chance. So I just need to get there.”

Matsuyama had a trio of birdies on his first six holes, the par-5 second hole, par-4 third and par-3 sixth, and at the midway point of the second round was at 2-under 36.

He bogeyed the par-4 seventh, and shot even-par the rest of the way, except for his final birdie on the par-5 15th hole.

Matsuyama maintained his poise throughout the day, giving him a positive mindset about the second round.

“I think I had a good performance,” Matsuyama was quoted as saying by Kyodo News. “Looking at the scores of other players, I thought it must be pretty difficult to play [due to the conditions]. I was playing thinking it was a bonus if I could get [birdies] on the par-5s.”

He added: “I played alongside Justin [Thomas], he comfortably got a 5-under and that lifted my performance. I can go into the rounds tomorrow and the day after in a decent position.”