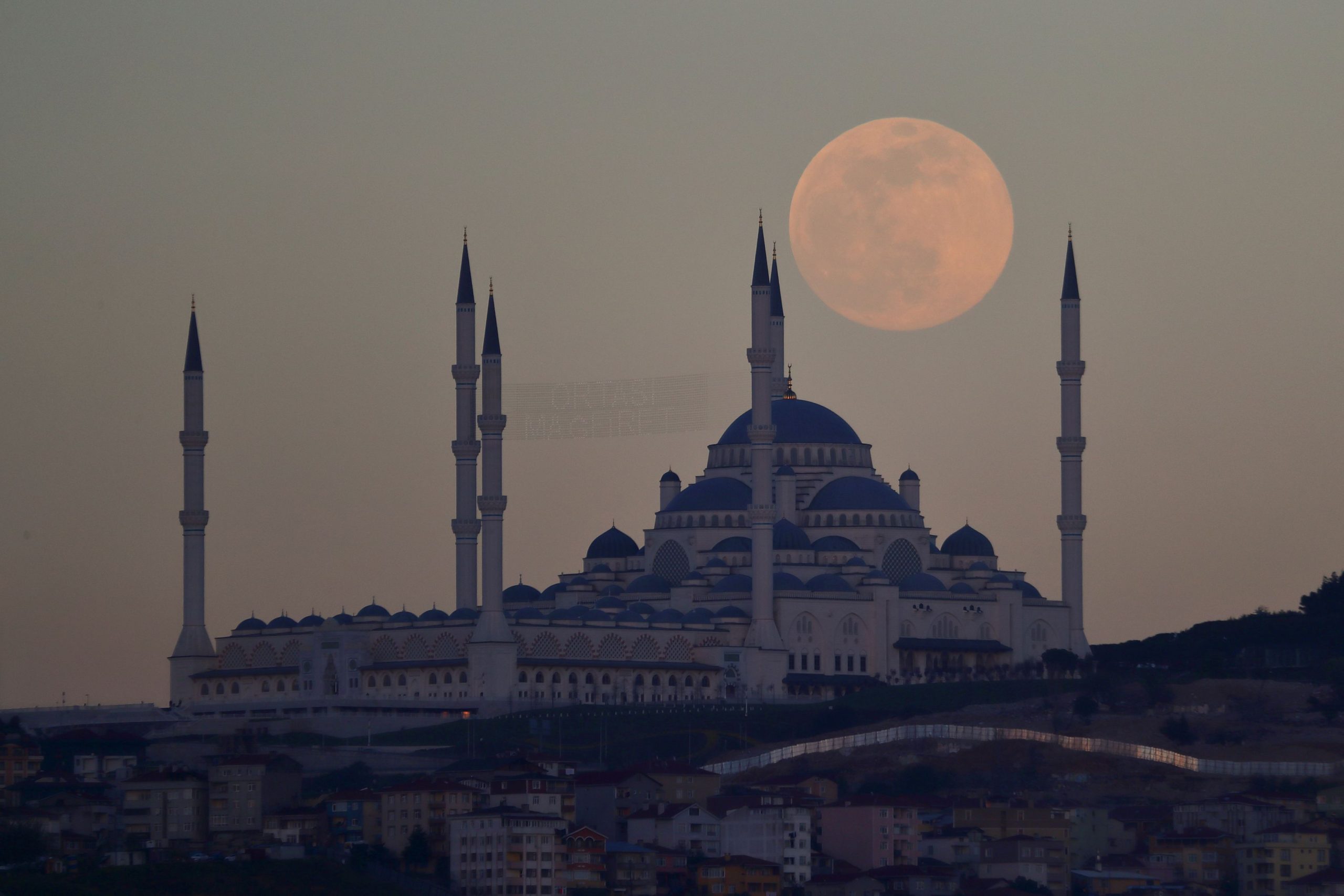 The full moon, also known as the Supermoon, rises above the Camlica Mosque in Istanbul, Turkey, April 26, 2021. REUTERS/Murad Sezer

Unlike its American ally, Japan has a generally positive history of relations with Muslim countries.

Early Japanese adventurers and intellectuals such as Chūta Itō and Yasumasa Fukushima helped pioneer travel to Islamic lands. And pan-Asianists in Japan often saw the Muslim domains of Central Asia and the Middle East as potential partners against European colonialism.

Japan and Turkey are said to have a particularly close relationship, born in the tragedy of the sinking of the Turkish frigate Ertuğrul in 1890 and the Japanese rescue operation which followed.

Japan’s connections with Islam are not fraught with the history of conflict between Islamic and Western forces, such as the Crusades, the Reconquista, the Battle of Lepanto, the French invasion of Algeria, and 9/11, to name just a few episodes. By the same measure, though, most people in Japan have little knowledge of Islam.

However, Japan depends on the Middle East for about 90% of its crude oil imports and about 20% of its natural gas imports. Good relations with Middle Eastern oil-producing countries are essential for energy security to protect people's lives and maintain socioeconomic activities.

The Japanese government clearly needs more and better information on Muslim countries and on Islam. But where to turn?

In January, I sat down with arguably the leading public-facing scholar of Islam and Muslim politics in Japan, Akari Iiyama. The author of several books and a wealth of newspaper and magazine articles on Islam, Dr. Iiyama is a fluent Arabic speaker (she has worked as a Japanese-Arabic interpreter) and has extensive experience working and living in Muslim countries.

She spoke of the importance of obtaining information on Islam and Islamic regions firsthand, and of conveying that information to the general public and the Japanese government.


Dr. Iiyama, I have enjoyed your work in the magazines Seiron, WiLL, the Sankei Shimbun newspaper, and JAPAN Forward, among many other outlets. Please start off by sketching some of the recent history of Japan’s relations with the Muslim world.

At the time of the first oil shock after the outbreak of the Fourth Middle East War in 1973, the Organization of Arab Petroleum Exporting Countries (OAPEC) classified Japan as an unfriendly country. Since then, in order to be recognized as a “friendly” country by the Arab countries, Japan has been developing diplomacy in the Middle East while keeping its distance from the United States, which is pro-Israel.

Although the Japan-US alliance is the cornerstone of Japanese diplomacy, Japan's Middle East diplomacy is an exception. For example, Japan has adopted an extreme appeasement policy toward Iran, which is a representative of anti-American nations.

Prime Minister Shinzo Abe made a historic visit to Iran in the summer of 2019. He was expected to serve as a mediator between Iran and the United States, two countries that are hostile to each other. But on the day he met with Supreme Leader Ali Khamenei, a Japanese tanker, the Kokuka Courageous, was attacked and set ablaze just outside the Strait of Hormuz. The US determined that this was an attack by Iran. This is one more proof that Japan's appeasement policy toward Iran is failing.

The fall of Afghanistan to the Taliban in the summer of 2021 further underscored the need for Japan to understand the Muslim world.

One thing that stands out reading your work is that the Japanese public and government are being fed a very distorted view of Islam and Muslim countries.

This is true. The left-wing media in Japan often reproduces the anti-American, anti-Israeli, even anti-Semitic biases one finds among so much of the Middle Eastern press.

For example, as I wrote in a JAPAN Forward piece last year, in May of 2021 the online edition of the Mainichi Shimbun newspaper “carried an article quoting Fusako Shigenobu, a former top leader of the now defunct Japanese Red Army, who is currently serving a sentence for attempted murder and other crimes.”

It gets worse. The Mainichi not only provided a platform to a terrorist. The paper also seemed to be sympathetic to some of her views. My JAPAN Forward article continues:

Among other things, Shigenobu is quoted as saying in reference to the recent fighting between Israel and Hamas, ‘It’s part of a plot to bury the Palestinian people.’

What was especially disquieting was that Shigenobu’s message was sent to a gathering meant to mark the 49th anniversary of the infamous Lod Airport Massacre jointly planned by the Popular Front for the Liberation of Palestine (PFLP) and the Japanese Red Army, in the name of an armed struggle for “liberation” of Palestine from Israeli “occupation.”

According to the announcement issued by the sponsors of the meeting, that incident of indiscriminate terrorism, which occurred on May 30, 1972 at Lod Airport (now Ben Gurion International Airport) near Tel Aviv in Israel, was part of the struggle to overcome discrimination through solidarity among different peoples.

The three Japanese who perpetrated the massacre — Kozo Okamoto, Tsuyoshi Okudaira and Yasuyuki Yasuda — were lauded as “the three warriors.”

Further, clear endorsement of terrorism was evidenced by statements like, “The comrades who set off on their desperate journey to the Ridda battle (a reference to the Lod massacre) said they were going to a ‘festival’ rather than a ‘funeral procession.’”

The list of speakers at the meeting included the sociologist Shinji Miyadai and movie director Masao Adachi — himself a former member of the Japanese Red Army.

This sounds like almost a celebration of a violent attack against the Jewish state of Israel.

And this is hardly the only example of this kind of reporting in the Japanese press. I cover this kind of bias and, quite frankly, anti-Semitism and anti-Americanism often in my work.


The Problem of Bad Information Begins in Japanese Universities

How did newspapers in Japan come to hold such views?

It all begins with the universities. I studied Arabic, Hebrew, and Middle Eastern history and politics in undergraduate (Sophia University) and doctoral courses (Tokyo University) in Japan. I experienced many instances of open anti-Semitism. Not just among my fellow students, most of whom were apparently supporters of terrorist organizations like Hamas. But also among the professors.

It is important to know that the professors in Japan who study Islam and the Middle East tend to be radical, even extremists. After the September 11, 2001 terrorist attacks against the World Trade Center, the Pentagon, and the innocent airliner passengers and crew in the United States, the reaction among many Japanese professors of Islamic Studies was, in a word, “Banzai!” They were overjoyed at the slaughter.

It may be easier to understand if I say that Japanese academia is fascinated by Noam Chomsky, who argued that America, the evil empire, deserved the retribution of 9/11.

As in the United States and Europe — for example, with American gender scholar Judith Butler — Muslim radicals are often seen by Marxists and other left-wing professors as allies in the fight against Western culture and capitalism. Anti-Americanism and anti-Semitism, including of course rabid anti-Israel sentiments, are as common among Japanese scholars of Islam, as among the same group in the West.

These professors radicalize their students, and the result is that the Japanese people and government end up getting badly distorted advice about Muslim affairs. Unfortunately, the connection between Marxism and Islam did not end in Japan with the horrific 1972 terrorist attack by the Japanese Red Army against Israel.

Read other essays and interviews by Dr Jason Morgan at this link.