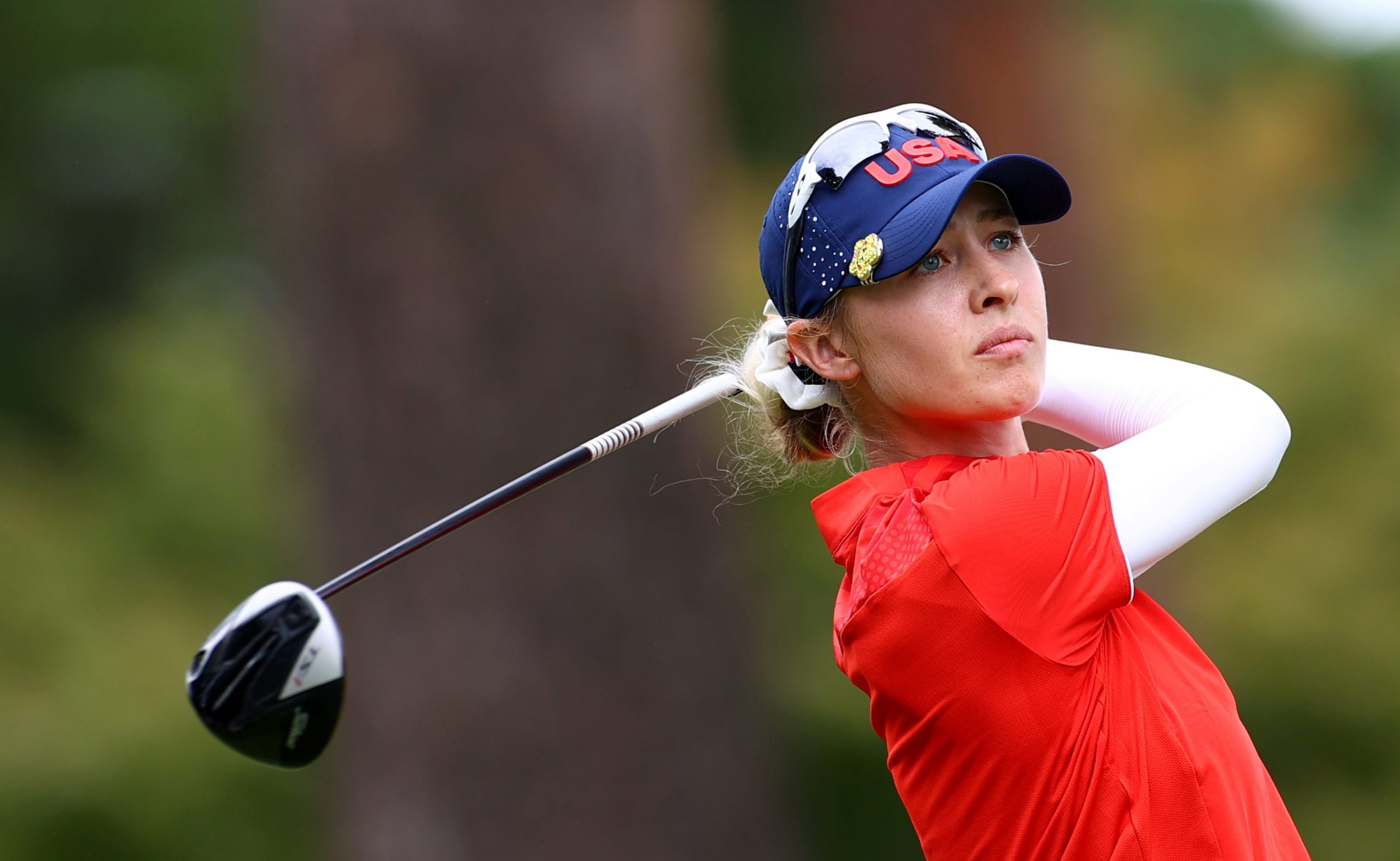 Nelly Korda competes in the final round of the Tokyo Olympics women's golf tournament at Kasumigaseki Country Club in Kawagoe, Saitama Prefecture, on August 7. (REUTERS/Murad Sezer)

Nelly Korda of the United States shrugged off the intense heat and a one-hour rain delay to win the gold medal in the women’s golf tournament at the Tokyo Olympics. And Japan claimed its first-ever medal in Olympic golf when Mone Inami prevailed on the first hole of a playoff with New Zealand’s Lydia Ko to capture silver.

The 23-year-old Korda, who had a three-stroke lead heading into the final round on Saturday, August 7, fired a 2-under-par 69 to finish one stroke ahead of Ko and Inami at 17-under 267 at Kasumigaseki Country Club in Kawagoe, Saitama Prefecture.

PGA Tour regular Korda survived a double bogey on the par-3 No. 7 to reel off three straight birdies from the par-5 eighth hole.

She had a bogey on No. 11, and another birdie on 13 before saving par the rest of the way.

Korda is the first player, man or woman, to win a major and the Olympic gold in the same year. She also won the Women’s PGA Championship in June.

Japan’s Nasa Hataoka and Yuka Saso of the Philippines finished in a six-way tie for ninth at 10-under 274.

Korda tapped in a 5-inch par putt on 18 to secure the win and then shared a hug with her sister Jessica, who matched the day’s lowest score of 64 to finish tied for 15th.

“This is just kind of like almost legend status as a golfer, period, male or female,” Jessica Korda posted on Twitter. “It’s tough to win out here and she makes it look easy, but those girls are good. So for her to be doing, it’s insane to me. This is like total GOAT (Greatest Of All Time) status to me.”

Ko and Inami both shot 65 in regulation.

After two bogeys and four birdies on the front nine, Inami had five birdies on the back nine including one on 17 that pulled her even with Korda. She bogeyed the final hole of regulation where Ko made par, sending the two players back to the 18th tee for a playoff.

Ko, who won the silver medal at the 2016 Rio de Janeiro Olympics, found a bunker with her tee shot and blasted out to the fairway in front of the green, leaving herself a 6-foot par putt.

Inami was on the green with her approach shot, leaving herself a long birdie putt which stopped inches from the hole. The Japan Tour regular tapped in for par then watched as Ko missed her par putt to settle for bronze.

“To win this medal is the best moment of my life,” said Inami. “The birdie on 17 was huge and I just tried to stay confident in the playoff.”

Play was stopped when Korda, Ko and India’s Aditi Ashok, who finished fourth after a 68, were on the 17th hole as a brief rain squall brought the threat of lightning. The players returned to the clubhouse but came back out to finish their rounds about an hour later.