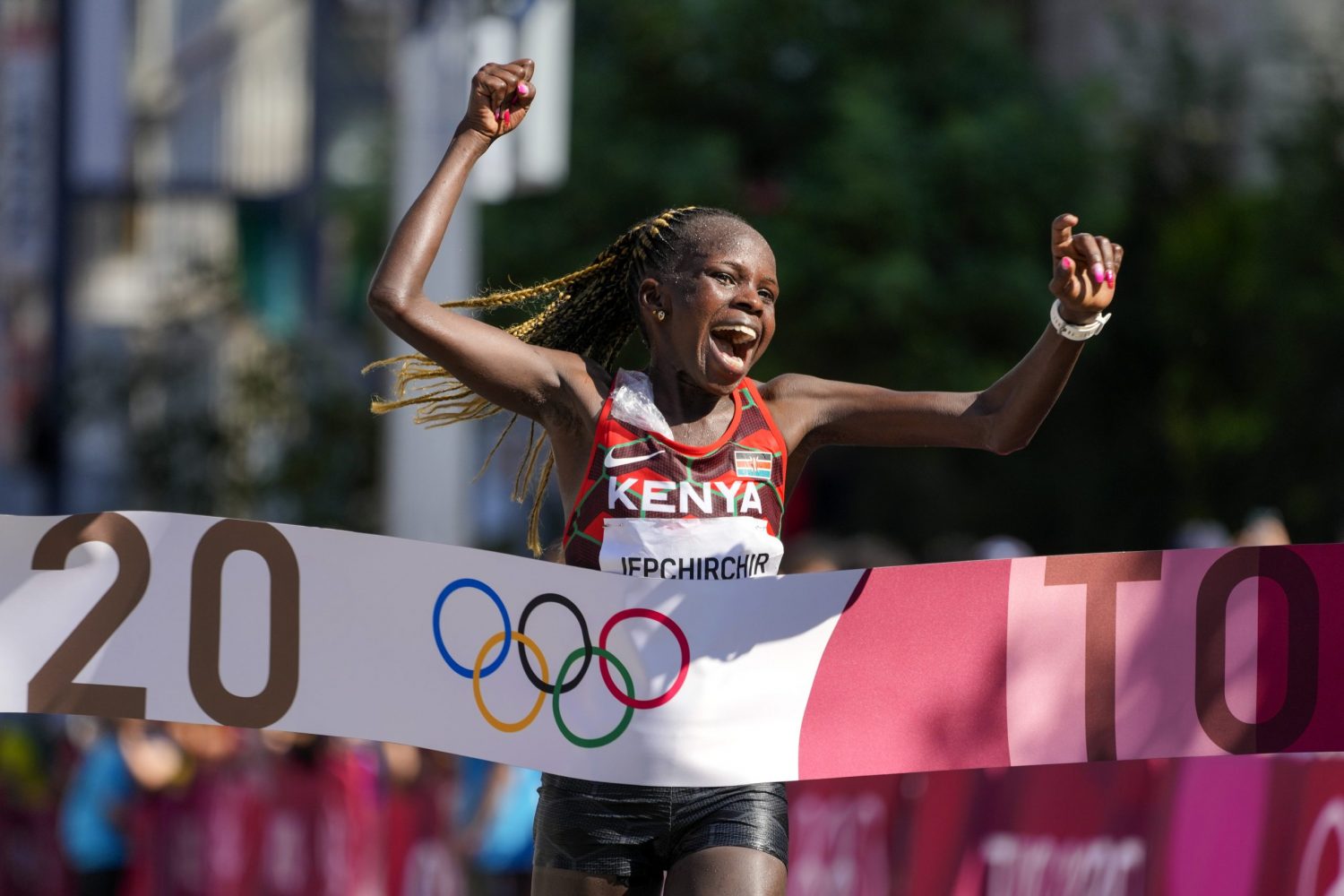 Kenya's Peres Jepchirchir celebrates as she crosses the finish line to win the women's marathon at the 2020 Summer Olympics in Sapporo, Hokkaido Prefecture. (AP/Eugene Hoshiko)

With a 6 a.m. early morning start to beat the heat, the women had their marathon in Sapporo on Saturday, August 7.

The marathon is one of Japan’s favorite events to follow, given the nation’s strong track record in the sport, with Naoko Takahashi winning the gold medal at the 2000 Sydney Summer Games and Mizuki Noguchi following with a vctoriy in Athens at the 2004 Olympics.

Attention was set on the weekend races, with the men’s marathon scheduled on Sunday, August 8, the final day of the Olympics.

Jepchirchir is the current world-record holder in the half marathon, and she broke her own record by running 1:05:16 at the world championships in Poland in 2020.

This is the 10th running of the women’s marathon at the Olympic Games, after it was first included in the Los Angeles Games in 1984. Kenyans have won seven of the 10 event’s, but this was the first time that the country claimed both the gold and silver medals.

“It feels good,” said Jepchirchir on winning gold. “I’m so, so happy because we won as Kenya. First and second.”

Seidel has been a rising star in the U.S., known affectionately as “By Golly Molly,” and has gone from relative obscurity to Olympic medalist in just eighteen months. Her recent first place was in the half marathon in Las Vegas in January 2021, with a time of 1:09:20.

The best runner for Japan was Mao Ichiyama, who placed eighth with a time of 2:30:13. This was the first time for Japan to finish in the top-10 since the Athens Games in 2004.

In her most recent race, Ichiyama won the Sapporo Challenge Half Marathon in May with a personal-best time of 1 hour, 8 minutes 28 seconds. The Olympic marathon was run on the same course.

Ayuko Suzuki and Honami Maeda were the other two runners for Japan. They placed 19th and 33rd, respectively.

A 24-year-old native of Kagoshima, Ichiyama also won the Osaka Women’s Marathon in January with a race-record time of 2:21:11 finishing ahead of Olympic teammate Maeda.

“To reach this point, it’s thanks to the support of so many people, so that’s why I thought to myself right until the end ‘I must run a bit more,’ and ran without giving up,” said Ichiyama to NHK.

The marathon started slowly, with Ichiyama and Maeda leading the pack until about the 15-km mark. After the 20-km mark, Maeda and Suzuki started to lag behind Ichiyama.

Ichiyama was among the lead group until halfway through, but then in the latter half of the race the Kenyan and American athletes sped ahead. Ichiyama lagged in ninth place near the end, but then recuperated some of the time difference and ended up eighth overall.

“With all the sacrifices, the hardships that I have gone through, I am not so happy with the result. But it was an eighth-place [finish] where I was able to measure my strength,” said Ichiyama after the race.

The heat was a hard enemy to fight. Despite Sapporo being over 900 km north of Tokyo, the temperature was already 26 degrees Celsius at the start of the race. By the time the top athletes had crossed the finish line (at about 8:30), the temperature had already climbed to 29 degrees, before climbing further to over 30 degrees after the race was mostly over.

Interestingly, compared to the 24 athletes in Rio de Janeiro who didn’t finish the race, in Sapporo only 14 runners failed to complete the marathon.

Maeda was among those who commented on the heat conditions.

“From the second half of the race, it was like my legs had stopped running. It was a race much hotter than what I was expecting, but it was still a valuable experience thanks to the support of many people,” she said. “I am going to take heed of this situation, and go forward with my practice.”

The course was a loop that started and ended in Sapporo’s Odori Park while running across the Toyohira River and through the Hokkaido University campus.

Despite the COVID-19 prevention measures, several areas were blocked off from spectators, including near the campus, and at the finish line where spectators had hoped to catch a glimpse of the winners.