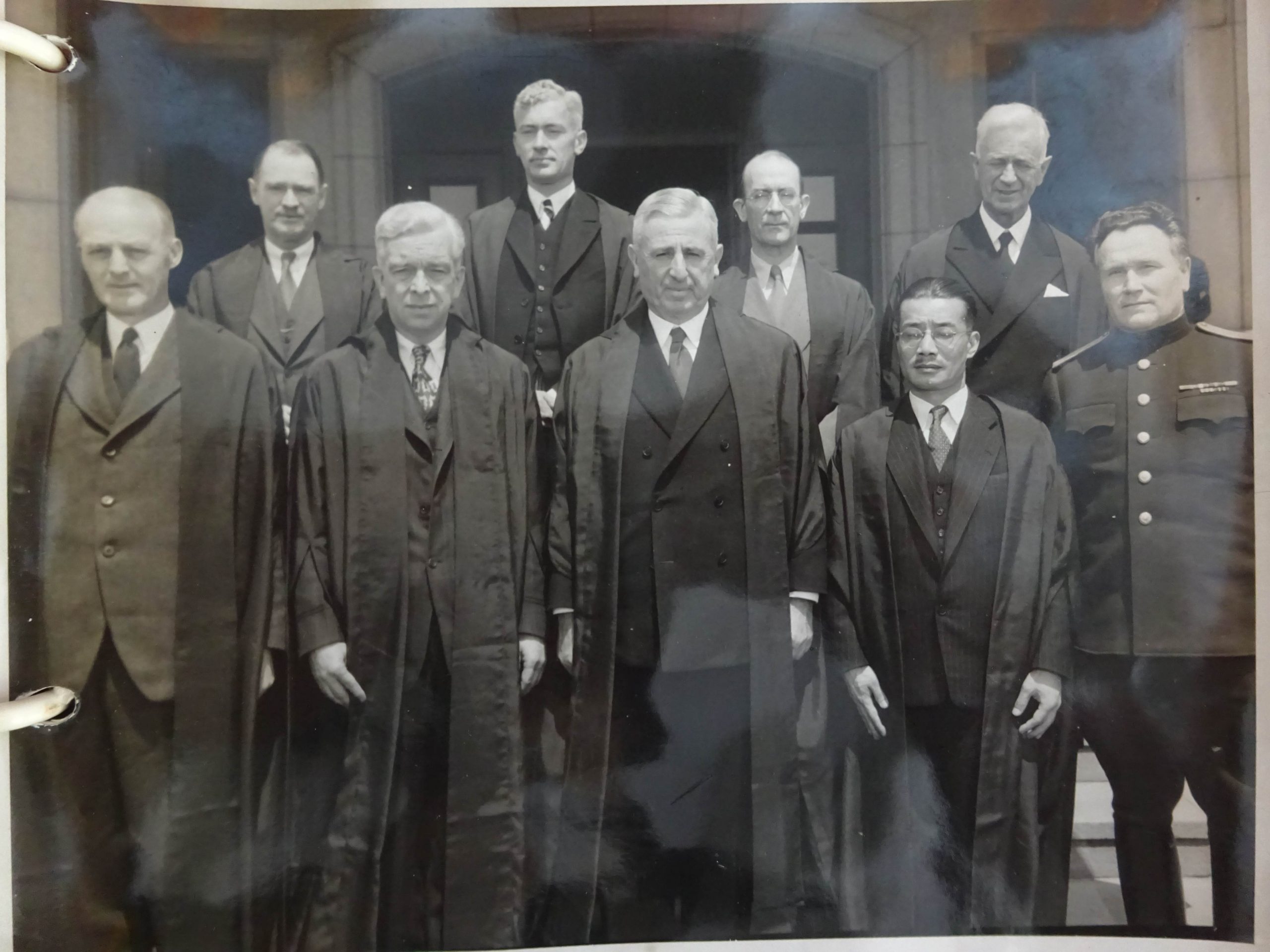 There were prosecutorial and judicial flaws in the Tokyo Trial, and obvious individual inequities in sentencing and treatment in the post-trial period. Yet, the patterns set by the Allies in the trial continue to reverberate in Japan today.

What are the impacts continuing into 21st century Japan, more than 70 years after the judgments were announced in November 1948?


MacArthur and the Emperor

The Occupation leadership’s decision not to force the Showa Tenno (Emperor Hirohito) to take responsibility for the war by requiring his abdication from the throne has been a significant factor on the oft-heard view that Japan has never confronted its wartime history. The emperor remained on the throne for another 44 years after the end of the war, a constant reminder to many East Asian countries of the wartime period.

Had it not been for MacArthur’s judgment to keep the Emperor on the throne, whether one believes it was correct or not, it is possible that the post-war bitterness of other East Asian countries would have been substantially altered. Had that happened, his son and successor, now Emperor Emeritus Akihito, would have served on the throne for 73 years by the time he stepped down in 2019.

Another significant impact of the trial is the decision not to add a specific count in the Tokyo Trial for wartime sexual slavery, known as the “comfort women” issue. Although Japan was not at war with Korea and the Korean Peninsula was under Japanese administration at the time, the decision to leave this out has allowed this contentious issue to remain open even today.

There were explicit sexual slavery charges tried in the conventional wartime trials conducted in Semarang, Indonesia, however, at which 11 military officers and civilians were convicted of crimes against humanity. The Semarang court issued one death sentence, and prison sentences in the range of seven to 20 years for the other 10.

While evidence of sexual slavery was presented in the China, Dutch, and French Indochina phases of the Tokyo Trial, it was never highlighted as a crime in and of itself.

It can also be argued that it was a mistake for the Allies to give the former United States and United Kingdom colonies of the Philippines and India seats at the Tokyo Trial, while excluding Japan’s former colonies of Korea and Taiwan, even though both former colonies had not been at war with Japan.

The decision to not conduct a second or third trial in Tokyo, unlike in Nuremberg where there were 12 subsequent trials, may have contributed to a sense that the Tokyo Trial ended abruptly and was incomplete. A sense of haste in moving on, perhaps overly rapidly from the perspectives of Japan’s neighbors, was exacerbated by the U.S.-led Occupation’s decision to reduce sentences and begin quickly paroling the convicted Class A prisoners.

World events such as the rise of the Chinese Communist Party in the People’s Republic of China, the Korean War, and the advent of the Iron Curtain certainly provided a pragmatic rationale for the Allied powers, who wanted to refocus on current challenges. But it was also seen in some parts of Asia as giving Japan permission to put the war behind it.

The appearance was that the primary criteria used for selecting the 28 defendants was one of convenience. This in turn contributed to the ongoing perception among some of Japan’s neighbors as well as domestically inside Japan, that justice was not being rendered against the individuals who were the “most guilty” of leading Japan into a disastrous war.

There was a sense of randomness in some cases, almost as if certain individuals drew the short straw. Admiral Mitsumasa Yonai, who was in six cabinets from 1937 to 1945 and prime minister in 1940, and Hachiro Arita, who was foreign minister in four cabinets from 1936 to 1940, were not indicted. Yet, others who held nearly identical positions were charged and issued life and death sentences.

Would Koki Hirota have been indicted, much less executed, if either Fumimaro Konoe, the four-time prime minister during much of the period from 1937 to October 1941, or General Hajime Sugiyama, war minister during Nanjing, been tried instead? Both Konoe and Sugiyama, whom Hirota met for the purpose of requesting that orders be issued to stop the atrocities, committed suicide before they could be arrested.

General Korechika Anami, who served as commander of the Imperial Japanese Army in China during Nanjing in 1938, and again in 1941 during the time Japan was accused of using poison gas in China, also committed suicide after signing the documents of surrender. He was a member of the clique who brought Tojo to power and had been adamantly opposed to surrendering, even after the atomic bombings.


Taking on the Big Picture with ‘Representative Accountability’

According to some reports, the untimely Russian demand to add Shigemitsu and Umezu to the indictment led to dropping the charges against generals Nobuyuki Abe, who was governor general of Korea when the war ended, and Jinzaburo Mazaki, who was a powerful general during the war, in order to keep the total at 28.

Meanwhile, take the case of General Iwane Matsui, commanding general for central China for one year from 1937 to 1938. Matsui was charged as one of the 28 defendants, although he was sick and bedridden 140 miles away outside Shanghai during the fall of Nanjing. In the end, he was acquitted of most charges, and was one of only two defendants not convicted on conspiracy. He was convicted on count 55 of the charges for a form of criminal negligence or “command responsibility, reckless disregard of the duty to prevent breaches of the laws of war.”

Holding that General Matsui, who was in China and the senior general officer of the Army, had a duty and the power despite his illness to order the atrocities to be stopped was one thing. Holding Hirota accountable on the same charge, when he was in Tokyo and not responsible for the Army in any way, seemed to be more about the prosecutors’ desire to see a government and military representative convicted for each major phase of the war and each highlighted atrocity.

As a result of these decisions, the argument continues even today that the trial overly shifted the focus from individual accountability to representative accountability.

With the focus on a broad-based charge of “conspiracy” and representative accountability, the Tokyo Trial led to a weakened sense of individual responsibility for the war period.

Arguably this pattern has carried over to the modern day, with corporate CEOs taking formal “representative” responsibility for accidents and errors which they had no discernable ability to control or prevent. An example: the president of Japan Airlines resigning after the August 12, 1985, crash of one of it’s Boeing 747s.

Japanese today consider this pattern perfectly normal. And, more to the point, the individual taking responsibility is not held in poor regard as a result.

If you were in a position of leadership and authority during the period 1928 to 1945, regardless of whether you personally issued or executed orders, or whether you could have prevented such execution or even had knowledge of certain events, you could be held legally accountable up to the loss of your life for aggression and war crimes.

Since the Emperor was deemed not accountable, who was accountable? Has this ambiguity contributed to China and South Korea’s claims that Japanese feel no remorse for the war?

Moreover, in hindsight, the way the Tokyo Tribunal proceeded may have allowed Japanese to focus less on their wartime behavior and more on their victimhood resulting from the Allies’ massive and repeated firebombing of civilian populations in major Japanese cities and the atomic bombings of Hiroshima and Nagasaki.

Prince Higashikuni of the imperial family, who very briefly became prime minister immediately after Japan’s surrender on August 17, 1945, gave a speech in the National Diet on September 5, 1945, with American soldiers present, that really set the tone for Japan in the postwar period. He said that Japan should look forward and not dwell on how the war started.

Higashikuni argued that the entire nation of 100 million was to blame, and, therefore, the country as a whole had to repent. The implication in his speech, which was quickly picked up by former Prime Minister Fumimaro Konoe and others, was that if everyone was to blame, then no individual was to blame.

The Tokyo Trial could have helped draw a sharper line for individual accountability. Instead, it reinforced the blurring of personal responsibilities in favor of collective responsibility. The decision to close the trial after the first round of prosecutions, and then to rapidly commute sentences and approve paroles within 12 years after the war’s end, reinforced that it was okay to put the war period behind the country and look forward.

Would Japan be in a different place with China and South Korea if the Tokyo Trial had been simplified and better focused? Or if it had addressed the responsibility of those with the authority to have stopped its wartime aggressions, leading to a trial more like Nuremberg that lasted one year (with time for subsequent trials) instead of the 30 months in Tokyo?

For Japan, and in the interest of justice, arguably it could have been a better result. Instead, decisions made in the run-up to and during the Tokyo Trial and in the post-trial period continue to reverberate in Japan’s relations with its closest neighbors in 2021.