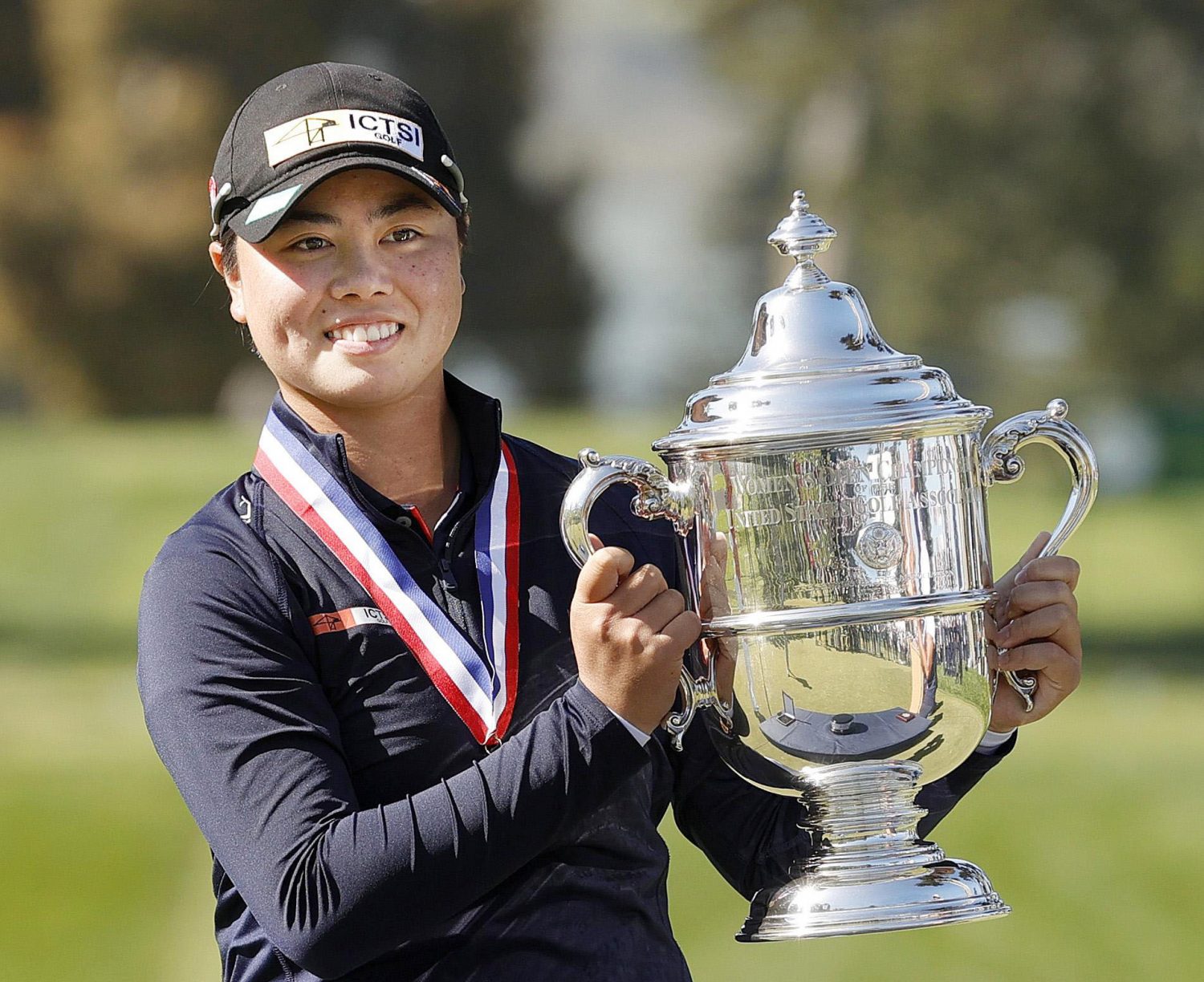 Yuka Saso overcame a shaky start on the final day of the U.S. Women's Open, displaying poise and confidence en route to an historic victory.

The Japanese-Filipino won the tournament in a three-hole playoff with Nasa Hataoka at The Olympic Club in San Francisco on Sunday, June 6.

Saso, whose father is Japanese, sank a 10-foot putt for birdie on the third playoff hole to clinch the title. She became the first golfer from the Philippines to win a major.

A delighted Saso expressed gratitude to her enthusiastic supporters back home.

In August 2019, Hinako Shibuno finished first at the Women’s British Open to become the second Japanese to win a golf major, the first since Hisako "Chako" Higuchi won the 1977 LPGA Championship.

To force a playoff, Saso and Hataoka both finished at 4-under par 280.

American Lexi Thompson led entering the final round after a 5-under 66 in the third round. She shot a 4-over 75 on Sunday, placing third overall at 4-under 281. Thompson struggled down the stretch, shooting 5-over par on the final seven holes and erasing a 5-stroke lead that she held through the eighth hole.

Saso carded an even-par 71 in the third round and was one shot off the pace entering the final round. She opened the four-day tourney with a 69, then shot a 4-under 67 in the second round.


Drama in Final Round

Instead, a pep talk from her caddie helped her channel her focus on the rest of the fourth round.

"I was actually upset," she admitted later.

"[But] my caddie told me after the two double bogeys that there's many holes to go, so just keep your cool," added Saso after claiming the $1 million USD (about ¥109.3 million JPY) top prize.

Saso stayed calm. She got back on track with a birdie on the seventh hole.

She also recorded birdies on Nos. 16 and 17, both of which are par-5 holes, en route to her aforementioned 4-under round.

The 22-year-old Hataoka had a solid showing in the fourth round, producing a 3-under 68 to finish in a tie with Saso.

Hataoka made three birdies in a pivotal stretch (Nos. 13, 14 and 16) to help her secure a spot in the playoff.

The U.S. Women's Open has a two-hole aggregate playoff format, with golfers playing the ninth and 18 holes. If their scores remain tied, a sudden-death format begins by replaying the ninth hole.

Which is exactly what happened on Sunday.

Saso and Hataoka both shot par on Nos. 9 and 18 before it swung back to the lower-number hole.

Saso then made the biggest shot of her life ー a 10-foot birdie on the third playoff hole to end it before Hataoka had a chance to pick up her golf clubs again.

When it was over, Saso, the 2018 Asian Games women's individual champion and a part of the Philippines' title-winning team at the quadrennial continental extravaganza, was asked about her demonstrative body language during the playoff.

Specifically, a reporter inquired about Saso's apparent cheering with the title on the line.

"During the playoff, on the first playoff hole, when Nasa's putt rolled just short, you kicked your leg up almost as if hoping it would go in," a reporter told the news conference. "You've talked about wanting everyone to play well. How do you continue to do that in a playoff for a major championship?"

Saso turned pro in 2019 and plays on the LPGA Tour of Japan. She won back-to-back titles in 2020, the NEC Karuizawa 72 and Nitori Ladies Golf Tournament.

Masakazu Saso, Yuka's father, began coaching his daughter when she was 8. She started playing golf in Manila and had big dreams.

“I wanted to be a pro from the beginning,” Saso recalled in a 2019 interview. "I liked the other sports, but golf was No. 1 as soon as I started. And Paula Creamer was my inspiration.”

Saso, who has dual Filipino-Japanese citizenship, triumphed at the 2019 Girls Junior PGA Championship, raising expectations for herself for the future.

“Winning in the United States is really special,” Saso said after her victory in Hartford, Connecticut. “It’s really hard to do since I live in Asia. I’m just really happy and thankful. My goal this week was to play steady and have fun. I think I did that well.”

Two years later, Saso's name appears on one of the biggest trophies in women's golf, and the significance of the achievement is quite meaningful to her.

"Yeah, I was just looking at all the great players in here," Saso stated. "Yeah, I can't believe my name is going to be here."


Strong Final Round for Hataoka

To her credit, Hataoka, who has won three LPGA Tour tournaments since joining the tour in 2017, including the 2019 Kia Classic, held her composure while battling the elements.

In addition, she was six strokes adrift of leader Thompson entering the fourth round.

"Today the wind was pretty strong, so I thought it might be difficult, but also with the score difference," noted Hataoka, who made the cut in all 12 LPGA Tour events she competed in last year. "But I told myself that I do have a chance. I keep trying and trying, and that's where I am."

Hataoka finished runner-up in a playoff at the 2018 Women's PGA Championship, also a major. Sung Hyun Park won the event.

Comparing the two experiences, the Ibaraki Prefecture native summed it up this way: "On the first playoff I had to wait over an hour, so I was kind of excited, got me all excited and uptight and I started thinking, but this one since it was right away and I decided I would just be relaxed, then just keep doing what I'm supposed to be doing, and this was the result."


Joy in the Philippines

As a new week began, Filipinos celebrated the news of Saso's victory in San Francisco.

It's a big deal, according to Bones Floro, the National Golf Association of the Philippines' general secretary. "We're very proud and happy for Yuka and for the Philippines," Floro was quoted as saying by Kyodo News. "Yuka is the hero of everyone now. She's our role model.

"Obviously, we had high hope. ... She has all the skills, and she has all the heart and the mind to actually win. Thank you for everything you do for our countrymen, and with your victory, continue achieving more and more."