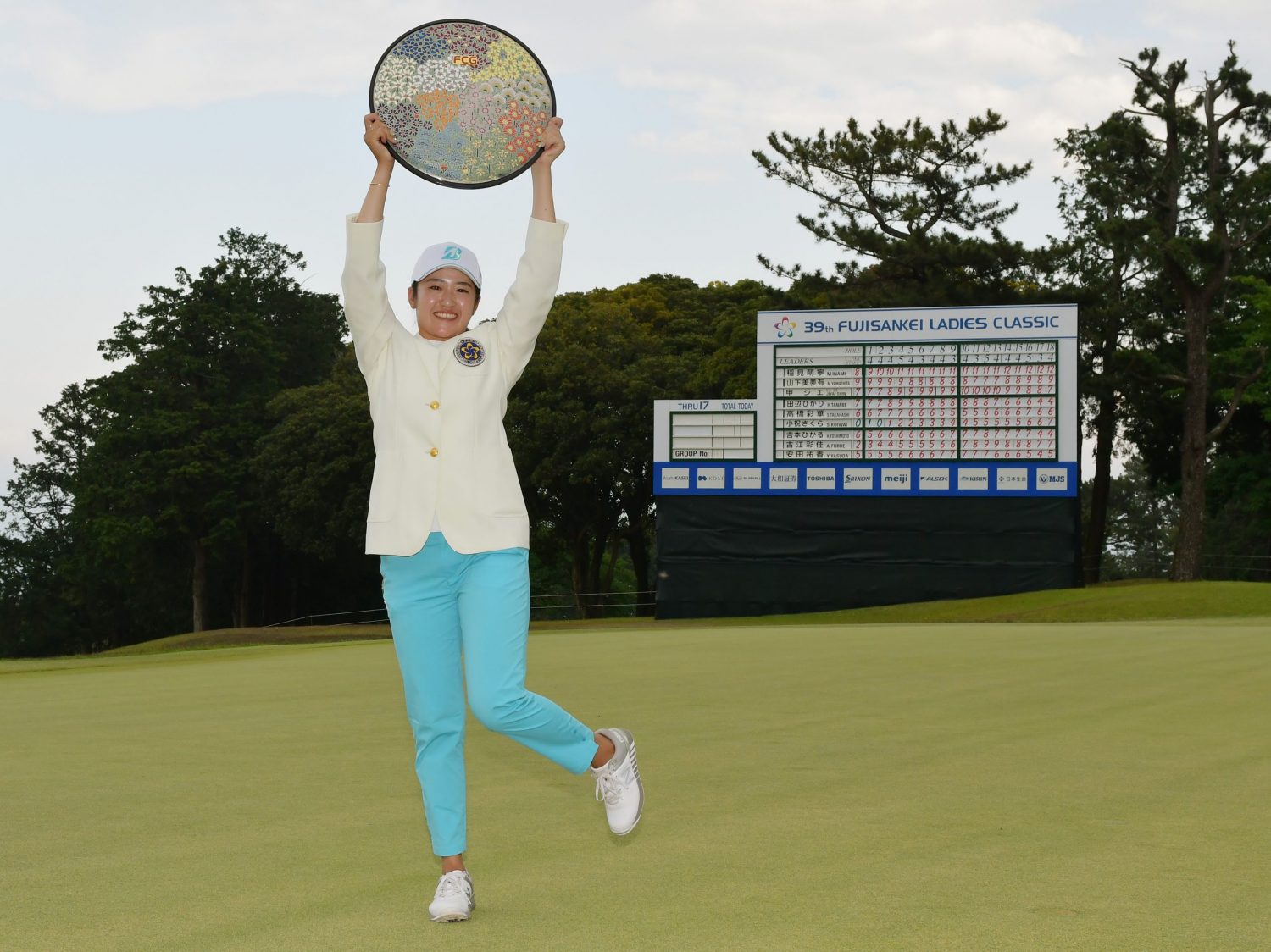 Mone Inami has played the best golf of her professional career over the past several weeks.

Though the 21-year-old Tokyo native hasn’t generated massive worldwide media coverage like 2021 Masters champion Hideki Matsuyma, nor generated as many big headlines as Okayama teenager Tsubasa Kajitani who won the Augusta National Women’s Amateur in a sudden-death playoff on Saturday, April 3, her track record of success this year is quite impressive.

Inami won her fourth title out of eight LPGA Tour of Japan (JLPGA) events to open the year on Sunday, April 25.

At the 39th Fujisankei Ladies Classic the fourth-year pro did it with textbook consistency, shooting three consecutive rounds of 4-under par 67 and finishing at 12-under 201. She won by three strokes over Miyu Yamashita (204). Sakura Koiwai, Ayaka Furue, Ritsuko Ryu and Jiyai Shin all finished five shots off the pace.

After the first round, Inami was in third place, then moved into a tie for second after 36 holes at Kawana Hotel Golf Course Fuji Course in Shizuoka Prefecture.

She opened the final round with a pair of birdies, which proved to be a good omen.

The Fujisankei Ladies Classic was played in front of more than 1,000 fans after the three previous tournaments were held without spectators.

“I was able to judge [my shots] calmly, and it was great that I was able to seize the opportunity,” Inami was quoted as saying by Sankei Sports.

After collecting the winner’s trophy, she mentioned that she enjoyed having fans within her sightlines throughout the event.

Analyzing how she played, Inami summed it up this way: “I was able to make a good flow.”

It’s the view here that it’s too early to predict that Inami is on the verge of having sensational success for the next decade or longer. But the positive signs are glowing all around us.

Inami, who began playing golf at age 9, triumphed at the Meiji Yasuda Life Insurance Yokohama Tire Golf Tournament at Tosa Country Club in Kochi Prefecture on March 14. She was tied with Kana Nagai at 6-under 210 after three rounds. Imai triumphed in a three-hole playoff. She earned ¥80 million JPY ($736,400 USD) in prize money.

Inami rode the wave of momentum to another title in the Yamaha Ladies Open Katsuragi on April 4 in Shizuoka Prefecture, finishing at 12-under 276 for the four-round event. In succession, she shot 70, 74, 66 and 66, beating Yamashita by one stroke.

Seven days later, Inami enjoyed the sweet taste of victory again. She claimed the Fujifilm Studio Alice Ladies Open title at Hanayashiki Golf Club Yokawa Course in Hyogo Prefecture by shooting a 5-under 211 over three rounds. She prevailed in another playoff, eclipsing Koiwai in the bonus play that lasted three holes.

“The playoffs were over in a blink of an eye and I don’t remember much,” Inami was quoted as saying by Golf Digest.

Back-to-back JLPGA Tour wins are a vivid reminder of her all-around skills, mental focus and poise on the golf course.

“I will continue to do my best!” Inami wrote on Instagram after receiving the winner’s trophy.

A Glimpse of Inami’s Potential

Inami, who turned pro on July 28, 2018, a day before her 19th birthday, demonstrated that she had the ability to be a top-notch golfer years earlier.

In 2014, she triumphed at the 2014 Kanto Junior High School Golf Championship Spring Tournament, followed by besting the field in the 2015 East Japan Women’s Public Amateur.

Looking at what happened after nabbing consecutive titles on the JLPGA Tour for the first time, she didn’t have her best performance, but came close to reaching the top 10, which is always a solid barometer for golfers when one considers how many participants there are in tournaments.

In the run-up to the Fujisankei Ladies Classic, Inami shot a 4-under 212 and tied for 11th at the three-day KKTcup VANTELIN Ladies Open, which concluded on April 11 at Kumamoto Kuko Country Club.

In addition, another statistical category showcases her consistency and slew of quality tournament performances. Inami leads the tour in driving accuracy (73.95%). It’s a key measurement of her consistency off the tee in hitting shots onto the fairway and leading toward the targeted approach, e.g. the green.

Due to the global pandemic, the JLPGA Tour opted to make a combined 2020-21 season. It kicked off last June, several months later than in a normal season.

Inami collected her first title of the revised season at the shortened Stanley Ladies Golf Tournament in mid-October at the Tomei Country Club in Shizuoka, leaping from tied for eighth (with an even-par 72) first round to tied for first with Bae Seon Woo and Saki Asai after shooting a 65 in the second round. Inami shot a birdie on the first playoff hole on the par-5 18 to win it.

A Rise in the Rankings

With five victories on the JLPGA Tour this season, Inami is No. 1 in that coveted category. Furue and Koiwai each have three.

In the latest Rolex Women’s World Golf Rankings, which were released on Monday, April 26, Inami climbed eight spots to 31st. Compatriots Nasa Hataoka (11th), Hinako Shibuno (21st) and Furue (24th) are above her in the world rankings. South Korea’s Jin Young Ko is No. 1.

Boosting Inami’s game this season is a noticeable change in her physique.

Between late November and early March while the tour was on winter break, Inami added kickboxing into her workout regimen. The effort paid off. She added about 7 kg and strengthened her muscles, Sankei Sports reported.