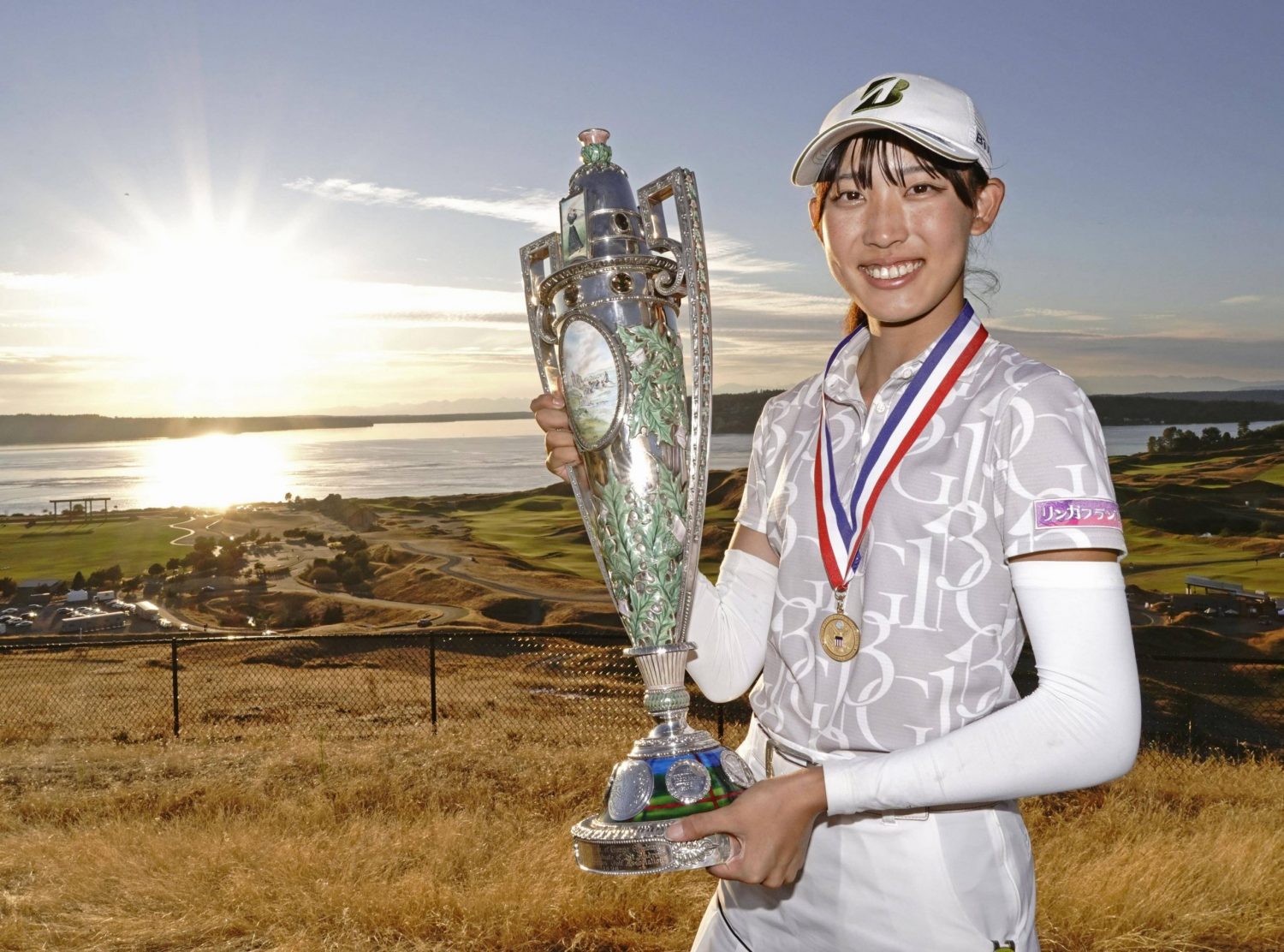 Saki Baba poses with the winner's trophy after capturing the title at the US Women's Amateur Championship in University Place, Washington, on August 14. (KYODO)

Japan’s Saki Baba put on a masterful performance on Sunday, August 14 to win the US Women’s Amateur Championship in commanding fashion, 11 and 9 over Canada’s Monet Chun at the Chambers Bay course in University Place, Washington.

The 17-year-old from Tokyo became only the second Japanese woman to capture the prestigious event after Michiko Hattori, who achieved the feat in 1985.

Baba destroyed the 21-year-old Chun in the planned 36-hole match play final at the par-73 links-style course on Puget Sound on a glorious day in the Pacific Northwest. The second-year student at Nippon Wellness High School took the lead with a par on the opening hole and never looked back.

Standing 175-cm, Baba led by four points after just five holes, and expanded the margin to seven after the first 18 holes with fine all-around play. The pair then had a two-hour break before playing the second 18, but Baba continued to pour it on, clinching the victory on the par-3 27th hole with a 15-foot birdie putt.

“I was playing the round thinking that I really wanted to win,” Baba was quoted as saying after her victory. “I’m really happy that I was able to leave my name next to Michiko Hattori.”

Added Baba, “It’s just amazing, I just can’t believe it. I was able to play my kind of golf. Everything just went smoothly.”

In match play, the competitors earn points for victories by the hole. If one player has a lower score on the hole, they receive a point. However, if both players have the same score on the hole, there is no change in the tally. At the end of the match, the winner is the one with the most points.

The final score of the contest reflects the lead and number of holes remaining. In this case, Baba had an 11-point advantage with just nine holes left, which secured the title for her after just 27 holes.

Chun, a junior at the University of Michigan, admitted she was unable to compete with Baba’s stunning performance on this day.

“Honestly, I was trying to match it up, but it was pretty amazing just to watch,” Chun commented. “She was going for every pin, making every putt, and that’s hard to match up.”

Baba’s margin of victory was the largest at the US Women’s Amateur since Anne Quast beat Phyllis Preuss 14 and 13 in 1961. It also marked the biggest margin of victory ever for a player from outside the United States.

With the triumph, Baba has earned an exemption for next year’s US Women’s Open Championship at Pebble Beach.

When people hear the word “amateur” they may tend to discount the level of play at the event, which was first held in 1895. But taking a look at the list of winners over the years will change that. Those names include Hall of Famers Julie Inkster, Beth Daniel and Babe Zaharias.

The champions on the men’s side of the US Amateur Championship are even more staggering, with the likes of Tiger Woods (a three-time winner), Jack Nicklaus (a two-time titlist) and Arnold Palmer all having earned the honor during their careers.

Baba, who comes from a family of four daughters, began playing golf at age 5 and won the Tokyo Junior Golf Championship at the age of 13. She is known for her strong driving ability, which has been reported to be an average of 270 yards.

The US Golf Association recognized Baba’s incredible achievement within minutes of her victory on Sunday, tweeting out a video clip of her birdie on the last hole with the words “A star is born!”