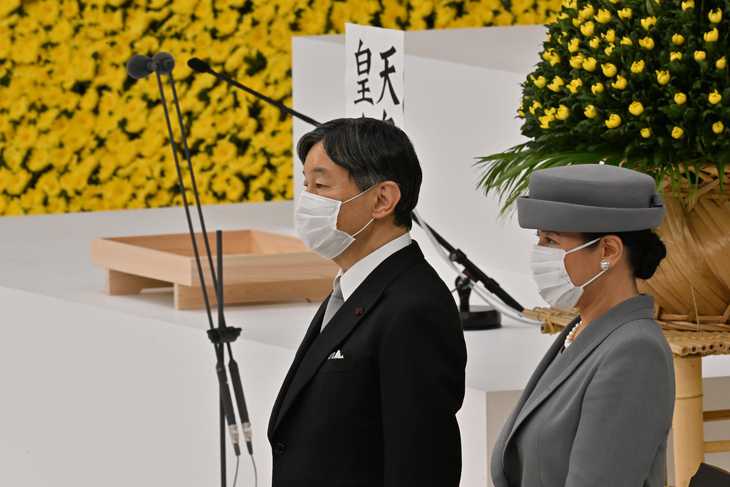 Emperor Naruhito and Empress Masako attend a ceremony at the Nippon Budokan on August 15 to commemorate 77 years since the end of the Second World War (Sankei).

August 15, 2022, marks 77 years since the end of World War II in Japan. In keeping traditions calling for national commemoration of the solemn anniversary, just over one thousand people gathered at noon on a sweltering day at the Nippon Budokan in Kudanshita, Tokyo.

Emperor Naruhito of Japan and Empress Masako were present, and the anthem of Japan was played after they entered the hall

Remembering the sacrifices of those who died in the war that ended 77 years ago and acknowledging how they have shaped Japan today, Emperor Naruhito pointed to the need for everyone in the country to come together again:

We are living in a challenging time, with continuing difficulties created by the COVID-19 pandemic. We must bring our hearts together as one and overcome these trying times together. I wish for the people to continue harboring hope for peace and happiness.

The commemoration of the end of the war, a poignant moment in the Japanese calendar, has even greater significance in 2022 due to the continued impact of Russia’s invasion of Ukraine in February and intimidation from the Russian president’s statement of willingness to use nuclear weapons.

In line with the urgency of the times, Prime Minister Fumio Kishida reminded the country in his speech:

In a world where conflicts are still rife, Japan will do everything in its power, coming together with the international community under the banner of peace, in order to solve the various issues that face our world.

“We cannot forget the sacrifice of those who lost their lives during the war,” said Kishida, as he recalled the over 3 million Japanese people who died in the war and acknowledged their surviving families.

The Prime Minister paid respect to those who suffered the atomic bombings in Hiroshima and Nagasaki, and those who lost their lives in the Battle of Okinawa, among other places.

A Hiroshima native, Mr Kishida has pledged his resolve over the years to strive for a “world without nuclear weapons.”

“We must paint a better future for our generation and future generations,” he concluded at the Nippon Budokan.

The scale of the ceremony at the Budokan was reduced this year due to infection mitigation measures against the spread of COVID-19. Approximately 1,000 were in attendance, about 5,000 fewer people than in an average year, but an increase over the one hundred people allowed in 2021.

‘War is Not a Historical Event’

Representing the associations of war survivors from all over the country, Kenichi Otsuki spoke last during the ceremony, at just after 12:15 PM.

Recalling how his father never came home after fighting in China during World War II, he admonished those present: “War is not a historical event that happened long ago. It’s something close to each of us, and we must remember that once more.”

Otsuki, an 83-year-old Okayama native, repeated his resolve to continue his activities and keep talking about the suffering of war, including how it affects regular citizens in the population.

Keeping the memory of war alive is increasingly challenging, as a growing percentage of survivors and people with memories of World War II are over 70 years old. Among those attending the Nippon Budokan ceremony alone, over 80 percent were over 70.

At a press conference before the ceremony, 95-year-old Takuji Sawasaki spoke about his two elder brothers, both of whom died during the war.

Sawasaki spoke of the urgency of passing on the message to the younger generations of Japanese. “I don’t want them to have to go through the experiences I had,” he said. Almost somberly he added that he thought this would be his last chance to participate in a commemoration ceremony marking the end of the war.

Representing the younger generations, eight-year-old Minori Minase very nervously told reporters that when he heard the stories about his great grandfather who died in the war, he was grateful for the sacrifice.