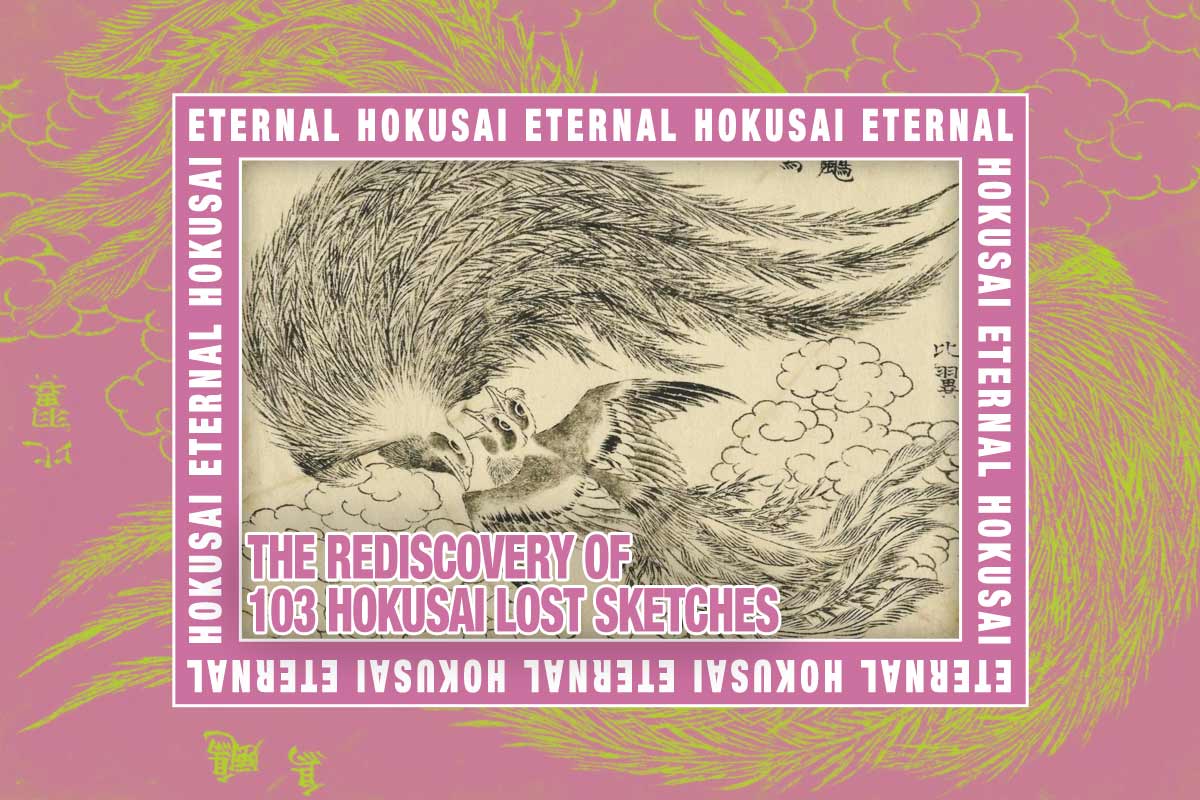 In the previous installment of this series, [Eternal Hokusai], artist Toshihiko Isao introduced us to the marvelous illustrations in Hokusai’s One Hundred Views of Mount Fuji. And in an earlier part of this series, I showed you the tremendous impact on Europe from Hokusai’s sketches and sense of design.

RELATED: [Eternal Hokusai] The Enduring Appeal of the ‘Great Wave’

Half a decade before the One-Hundred Views of Mount Fuji was published, and only a few years before Hokusai designed “The Great Wave”, the Master set out to create one of his most ambitious works, the fittingly titled The Great Picture Book of Everything, for which he made a large number of sketches.

Sketch No. 1 is the feature photo, above. The 103 sketches for The Great Picture Book of Everything by Hokusai never made it back to Japan, but they did resurface in Europe in June 2019.

Unfortunately, the project was abandoned for unknown reasons and never fulfilled. It may have something to do with the fact that Hokusai faced a series of personal challenges in the 1820s, a time from which few of his works remain today.

In a letter from the first month of 1830 he mentions living in near poverty. In 1828 his second wife died. Hokusai himself suffered a minor stroke in 1827, although he recovered and lived until the mature age of 89 years, a sage-like age at the time.

However, in 2019, 71 years after the 103 sketches for The Great Picture Book of Everything last appeared at an auction in Paris, they were rediscoveredーand eventually obtained by the British Museum.

So how did these sketches end up in London?

As I explained in previous articles in the series [Eternal Hokusai], Japanese woodblock prints and picture books became tremendously popular in Europe during the late 19th Century. The French jeweler and collector Henri Vever was one of the first serious collectors in the 1880s. He acquired a large number of Japanese prints from the art dealer Hayashi Tadamasa.

Yet the 103 sketches for The Great Picture Book of Everything by Hokusai never made it back to Japan. They resurfaced only in June 2019, when a French collector took the sketches to the Auction House Piasa in Paris. The sketches were estimated at 20.000 euros, but went for six times that price.

The collector Israel Goldman, who had recognized Vever’s seals on the sketches, then took them to the British Museum’s former head of Japanese art, Tim Clark, who was surprised by them. He had never heard of The Great Picture Book of Everything before that time.

Finally, with art fund assistance, the British Museum managed to purchase the sketches, which could well turn out be one of the great art discoveries of the 21st century.

So what kind of pictures did Hokusai draw for The Great Picture Book of Everything?


The sketches cover an enormously wide range of subjects, from historical, mythological and religious figures from Japan and various other countries, to animals, supernatural beings, natural phenomena and landscapes.

Some of the drawings of mythical beings are wildly inventive and creative, like an illustration of the mythical two-headed hiyoku bird with its young. Another is the Daoist figure Zhou Sheng, who created a ladder out of clouds to seize the moon.

Other sketches reveal Hokusai’s thorough knowledge of the ancient world and religious themes, like a picture showing Cai Lun, the alleged inventor of paper, and the Buddhist Guardian Deity of the Southern Direction, Zōjōten, being struck by lightning.


With the acquisition of these 103 sketches, the British Museum now owns a collection of over 1,000 works by Hokusai, making it one of the largest collections of the artist’s works outside Japan.

The Museum is planning an exhibition of the sketches in September 2021. The sketches have also been photographed and fully digitized, and can be viewed through this link on the British Museum’s website.