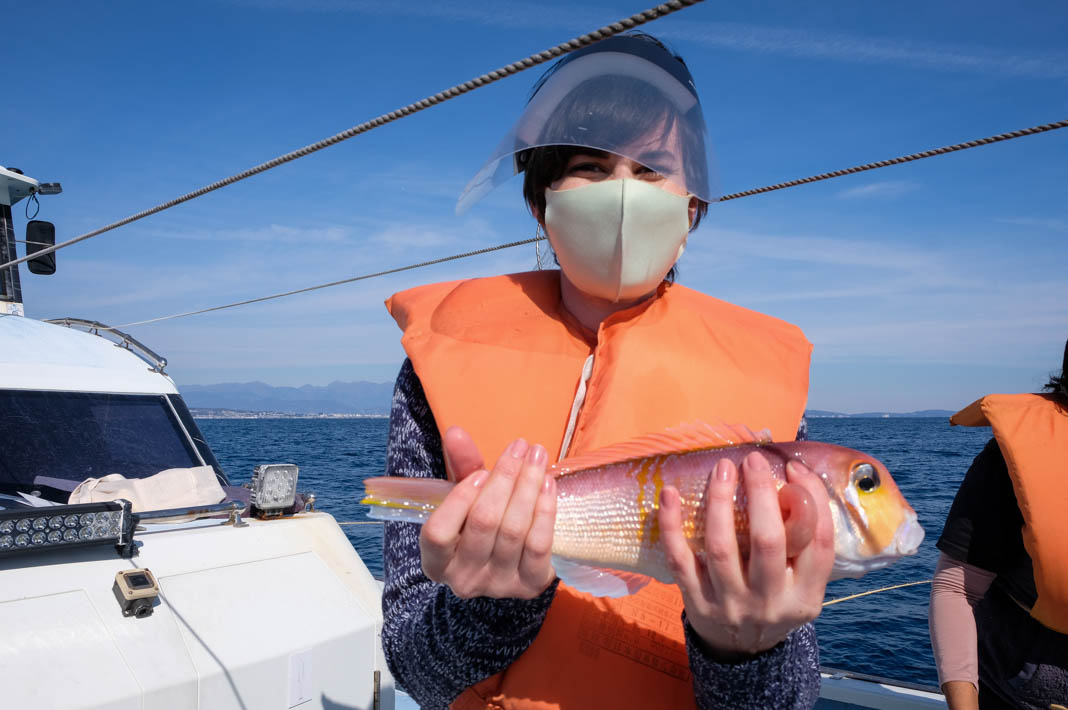 I peered over the side of the boat into the dark water below, the line of my fishing pole bent with exertion as I struggled to reel it in. Next to me was a seasoned old fisherman, clad in a worn windbreaker, a knit cap, and wellington boots. Below his face mask poked a grizzly, white beard. The corners of his eyes crinkled in concentration as they focused on the line.

I could make out a whitish creature, growing ever larger as it rose out of the depths towards us.

I’m not an outdoorsy person, and yet here I was, fishing for the first time ever in Sagami Bay in Kanagawa Prefecture. My party had convened at Manazuru Port bright and early that morning and boarded a small fishing boat. We were given life vests, taught how to bait the fishing hooks with krill, and set up with fishing poles before the boat had left the port for the open waters of the bay.

Incredibly, not five minutes after I’d dropped my line, I’d caught something, the first catch of the day. How’s that for beginner’s luck?

As the creature grew closer, my doubts about it increased. The captain of the boat, a small, salty fellow, leaned out of his cabin, a cigarette drooping from his lips.

“Same! Same!” he called out. I had caught a shark.

The seasoned fisherman took over, and deftly grabbed the line, hauling the baby shark over the side and wrestling it to get the hook out of its mouth, before thrusting it into my hands for a photo-op. What do I do with it now? I wondered. Surely we don’t eat sharks here in Japan!

Blessedly, I released the shark over the side, back into the ocean from whence it came.

Although I was shocked by this experience, perhaps it wasn’t so surprising considering where I was. As our guide Shinji San informed us, Sagami Bay is a fisherman’s paradise that attracts a huge amount of biodiversity among fish species due to the mixing of multiple ocean currents with the runoff of fresh spring water from the mainland.

The Manazuru Peninsula is a dense, forested piece of land, with wooded hills that rise steeply from where the land kisses the ocean. The nutrient-rich soil that makes its way into the water from these woodlands creates a healthy plankton population for the fish to eat. In addition, the bottom of the deep bay is littered in rocks and crevices, creating lots of places for fish to hide and grow large.

If you dream of fishing in Japan, Sagami Bay is the ideal spot.

It was fishing at its best, out on a boat with some of the area’s local commercial fishermen.

Perhaps because of the shark, the seasoned fisherman took a shine to me, showing me how to lure fish to my hook by raising the fishing pole slowly up and down and instructing me to drop the line deeper to catch more fish. Like any novice apprentice, I fumbled in my training, and was continually scolded for baiting my hook incorrectly or for not raising the pole slowly enough.

As we waited for something to bite, the fisherman asked if I lived in Tokyo.

“Yes, I live in Tokyo,” I replied. “But before that I lived in Kanazawa. The fish from Ishikawa is very delicious.”

“Oh yes,” he agreed, nodding his head. “Good fish there.”

His tutelage paid off, as I caught a whopping total of ten fish. Shinji San was right: in only a few hours at sea we hauled in many different species. Big fish and small fish, flat fish, round fish, and even an ugly, orange fish with spikes that fetches a high price at the local fisherman’s wharf.

We were rewarded for our hard work by gorging on our fresh catch, thinly sliced into sashimi and served on a wooden boat with heads and tails included in the eye-catching display. It was definitely the freshest fish I’d ever eaten!

RELATED: [Hidden Wonders of Japan] There Are ‘Yokozuna Sardines’ in Japan’s Deepest Bay

Manazuru: A Town of Sea, Stones, and Citrus

Manazuru Town is more than just fish, however. The rocky, mountainous peninsula that it sits on also produces komatsu ishi, the type of stone that the Imperial Palace in Tokyo is constructed from, and mikan, a type of citrus fruit similar to tangerines. As these industries grew, the town sprang up around Manazuru Port, with colorful houses climbing the steep hillside near the sea. The result is a picturesque coastal town that has been called the Amalfi of Japan.

Why this seaside jewel remains so pristine is in large thanks to the Manazuru City Design Code, which saved it from the overdevelopment that claimed neighboring hamlets during the bubble economy of the 1980s. Thanks to this design code, buildings remain in harmony with the location, a sense of community is fostered, and the magnificent vistas that the area is famous for have been protected.

To get to one of those vistas, we headed into the residential hillside, climbing a series of narrow footpaths, zigging and zagging upwards through charming houses and inviting local businesses.

These setomichi, or “back door paths” as translated by Shinji San, are vital to the fabric of Manazuru. He went on to explain that these paths act as lines of communication for the community and foster a sense of closeness between neighbors. “These used to be all over Japan,” he told us, “but in the 1980s most were destroyed to make larger roads for cars.” Because of the Manazuru City Design Code, they have been preserved here.

The unfortunate reality, though, is that this community has been shrinking over time, with a current population of about 7,000, down from it’s peak of 10,000 fifty years ago. This story is one that is familiar among seaside towns and other places with local, manual labor-driven economies. “The best is if young people come live here, and raise families,” Shinji San told us.

In addition to attracting permanent residents, Manazuru is using tourism as a way to revitalize the town. True to the ethics of the place, nothing has been Disneyfied in order to attract tourists, and the excursions being offered are real, not manufactured, such as the hands-on fishing experience I’d participated in.

From high on the hillside, I caught my breath, and looked down at the picture-perfect scene before me: delightful houses and wooded mountainside cascading down to the shimmering sea.

In this pristine location, you’d be hard-pressed to find a bad view, and for this Manazuru is a photographer’s delight. But as a travel destination, it is so much more than just nice views.

By leaving it’s back door open to visitors, it offers an opportunity to find the continuity between past and present, and to see how people actually live in this charming place where the sea meets the sky.