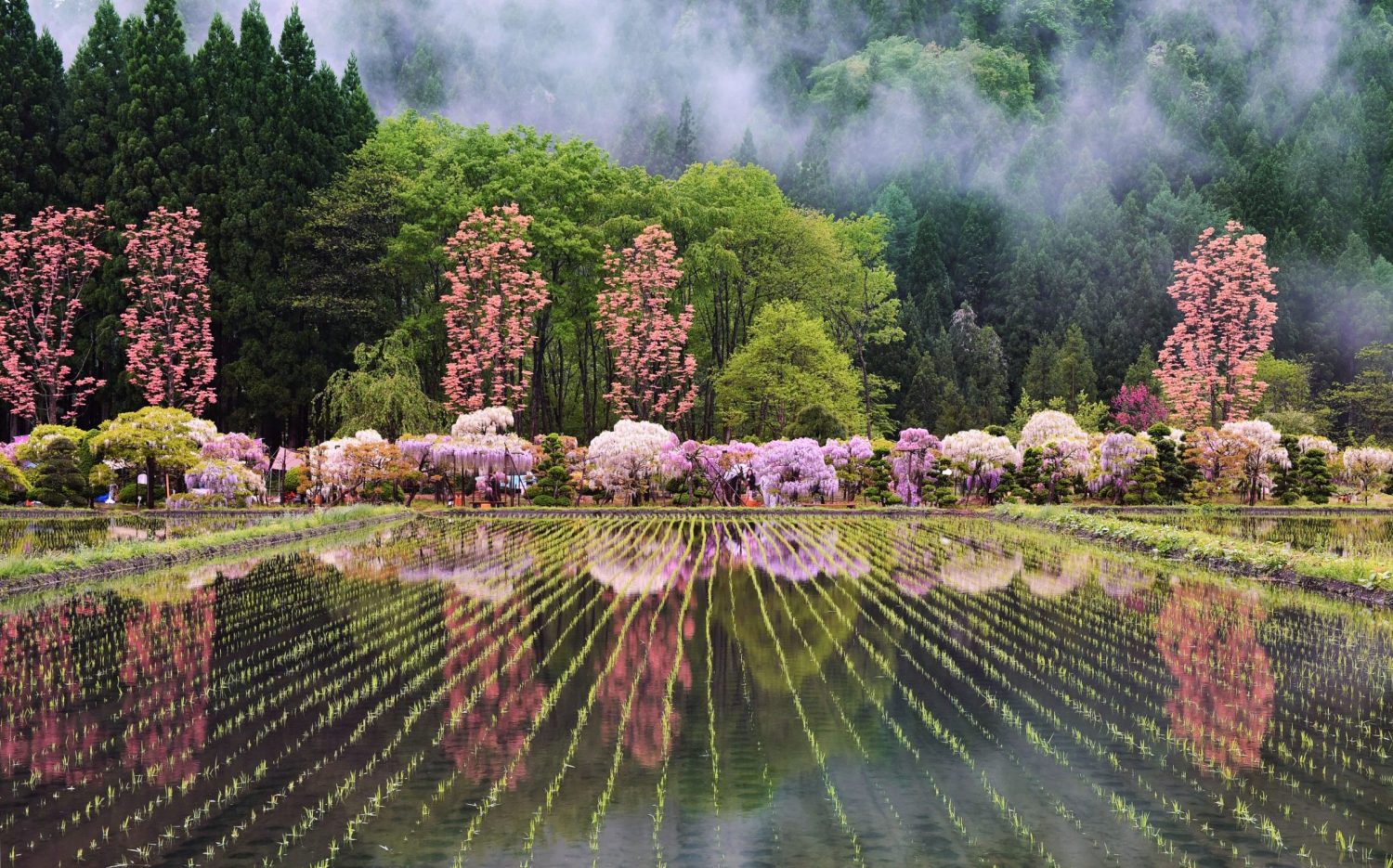 After the morning rain, fog hovered over the Tonose Fuji no Sato. The name of the garden is from Mount Tonose, located west of this spot. The tall Chinese mahogany tree (Toona sinensis) also turns pink at the same time as the wisteria = May 21, Odate City, Akita Prefecture

If you drive through the rural valley, you will see a belt of light purple and pink that stands out from the side of the mountain. Fresh green leaves and wisteria flowers are reflected in the glassy surface of the newly planted rice field.

Known in Japanese as “Tonose Fuji no Sato” (which means Tonose, home of the wisteria,) it is located in Odate City, Akita Prefecture, which is on the northwest side of Japan’s main Honshu island, bordering Aomori Prefecture.

In recent years, this spot has gained popularity on social networks, and become a popular tourist destination.

Locals say that 25 years ago, a local farmer, Hiroshi Tsushima, planted a wisteria garden as a hobby in a field used for cultivating hops, a raw material sometimes used to make beer.

The wisteria spot became known among locals, who would come and enjoy the flowers. When Hiroshi died in 2017 at the age of 84, his eldest son, Yoshihiro, 58, decided to continue the tradition, since it would be "a pity to abandon the wisteria."

He worked with a local design company to install a parking lot and public toilets so that more people could visit the park. With free admission, 20,000 people visited the garden in 2019. The location closed temporarily in 2020 due to the pandemic, but it reopened again in 2021, albeit for a shorter period of 12 days.

The garden is about 2000 sq meters wide, with about 80 wisteria trees. Yoshihiro says, "My father was a quiet man and he never talked to me about cultivating wisteria. Pruning requires a lot of work, but I studied from scratch from books and started managing it.” He added, surprised,” Who would have thought what my father started would become so popular!"

Tomie Tsushima, 88, Yoshiro’s mother, who takes charge of planting rice, recalled her late husband’s affection for the garden: "He didn't communicate much, so it would have been hard for him to build up it as a business to this point alone."

Now, the wisteria left by Hiroshi is being carefully protected by his family.