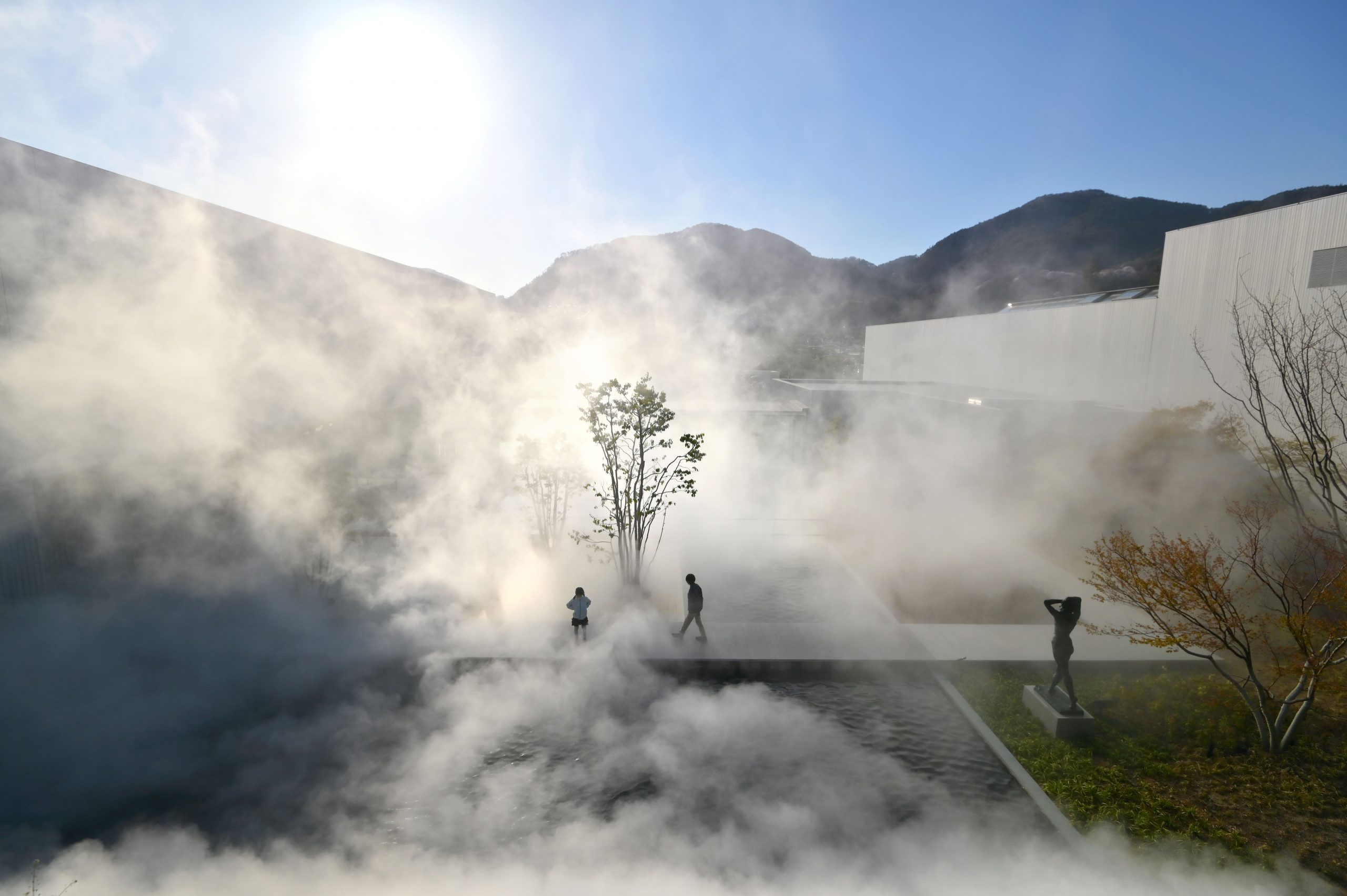 For an instant, the terrace is shrouded in fog and evolves into a magical scene. The fog changes shape, depending on the direction of the wind, and becomes a “sculpture” that is one with nature.

Artist Fujiko Nakaya’s “Fog Sculpture” is a representative work that harmonizes with the adjacent Zenkoji Temple — a temple which dates back to the 7th century and is a popular tourist destination — and more widely the surrounding landscape.

Artificial fog is spread from special nozzles at high pressure, enveloping people and buildings with the white mist. The artist, Nakaya, chose the museum because she considered it in suitable harmony with its surroundings.

Nagano Prefectural Art Museum is located in Nagano City, about 244 kilometers northwest of Tokyo. It is currently closed until the end of the third state of emergency ordered by the government to address the COVID-19 pandemic.

The recently renovated main building of the museum has three floors above ground and one in the basement. It is a structure that makes use of the natural slope of the location, and with its many glass-fronted sides, one can see Zenkoji Temple from inside the building.

Once every six years, Zenkoji temple exhibits the Maedachi Honzon statue, a replica of the temple’s hidden Buddha image made in Japan in the Kamakura period (1192-1333), in an event known as Gokaicho. The Maedachi Honzon is a designated cultural property.

In an average year, millions of people come to pay their respects, according to the temple’s official site, and nearly 7 million people visited the temple in 2009. However, this year’s event has been postponed to 2022 because of COVID-19. The reopening of the museum on April 10, which was scheduled to coincide with the Gokaicho, was held as planned.

As expressed by Yuko Iizuka, 34, a spokeswoman for the museum, “It’s a pity that the opening of the museum could not coincide with the Gokaicho, but I want people to visit [the museum] and use it like a park at any time.”

The public can freely access the third floor observation plaza overlooking the mountains of Shinshu, the historical name for Nagano, and Zenkoji Temple. A man in his 70s who lives nearby said, “I go for a walk every day, but I didn’t know I could see Zenkoji temple from here. It’s refreshing to see it for the first time like this.”

The museum, together with Zenkoji and the natural surroundings, creates a new view of Shinshu. While waiting for next year’s Gokaicho, I’ll just blend in with the people and the scenery.