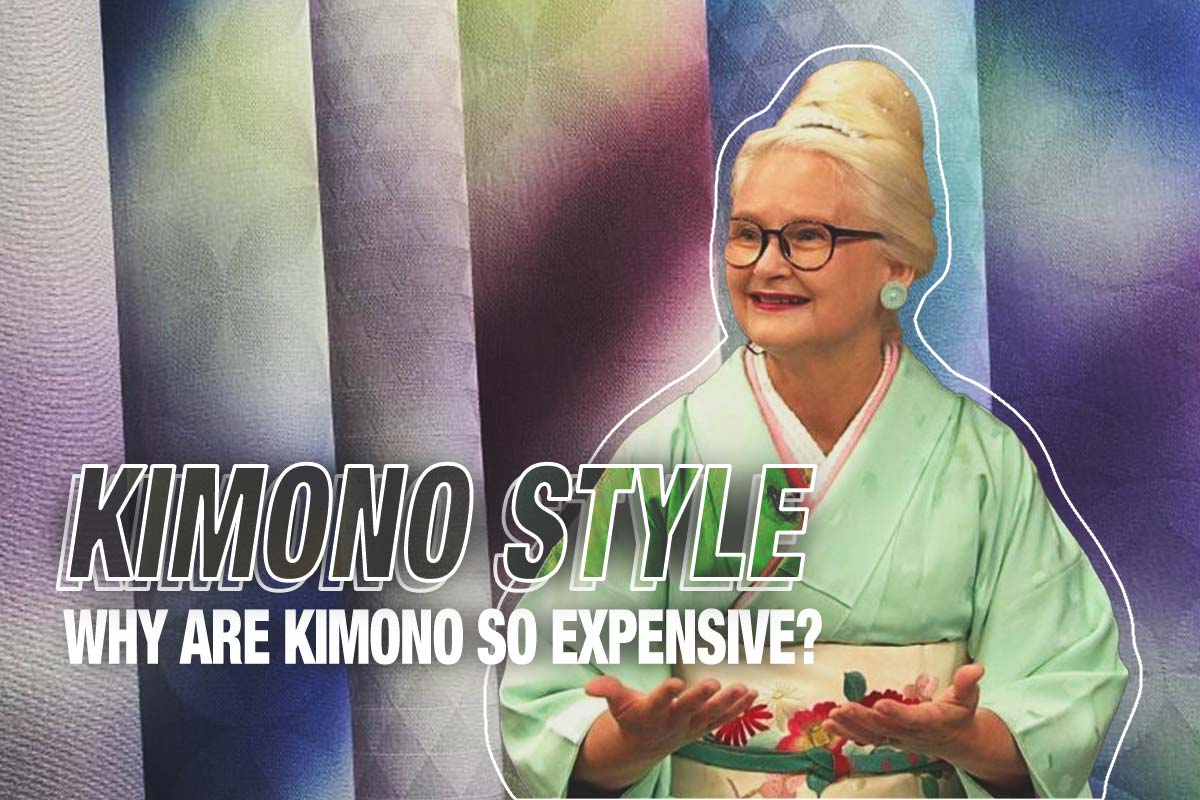 A question I am always asked is “Why are kimono so expensive?” One day I tried asking the question to my Japanese students studying in my kimono class and one student replied, “They are sewn by hand”.

At least she had thought about the answer, and the answer is true. In most cases kimono are sewn by hand. However, sewing by hand takes the last day, or possibly two, of a process that can take upto or even more than a whole year.

This article will cover the making of a silk kimono, which is the main material for couture kimono. But kimono can also be made in linen, cotton, polyester and wool. Mainly the discussion is about the production aspect of kimono, but the antiquated distribution system is also responsible for the price of kimono.

Starting with the Threads

The world of silk kimono is divided into two large sections, dyed kimono and woven kimono. Of course, all kimono are woven and dyed, but the order in which these processes take place makes a significant difference in the formality of the kimono.

Dyed kimono have the pattern or plain color dyed onto a bolt of white fabric. The kimono may be plain, shaded, have an all-over repeated pattern or have a pattern drawn and painted on or even embroidered on, but the key point is that the pattern is applied or produced on white fabric.

The majority of silk is imported from China and Brazil, as there are few places in Japan where sericulture is still practiced. It is a dying industry which involves intensive labor and low pay. In the 1920s more than two million households were involved in the production of silk, and their low wages were a significant part of the success of Japanese silk in the world.

The imported silk is spun and reeled into threads, purified, and has the sericin removed from the thread. (Sericin is a protein created by silkworms around the silk fiber.) The Tango area of Kyoto is famous for this production, but there are a few other areas, such as Yamagata and Hamamatsu, which are well-known for kimono silks.

The silk bolts are uniform in length and width for kimono, with extra-long bolts for long sleeved kimono, and slightly wider ones for men’s wear. Shorter and thinner fabric is produced for the underwear.

Craftsmen and Special Equipment in Creating the Textiles

Fabrics can have a satin finish, rinzu, or have a less shiny and more textured crepe surface, chirimen. These fabrics can be plain or have a ground pattern woven into them.

Jacquard looms were introduced from France in the Meiji period and the jacquard pattern was determined with the use of a series of cards with holes punched in them to determine whether a thread goes up or down. Thousands of cards are necessary in the production of one kimono. Computers have largely replaced the card system, but some weavers are still using the Meiji period looms and the card system.

Once the white bolts are finished they go to a local wholesaler, tonya, and from there they go to dyeing workshops or to producers, shikaya. The shjikaya organize the production of order-made kimono.

A shikaya will act as a middle-man, sending a kimono bolt to a dyer, and then to a steamer, then to an embroidered etc. There are fewer shikaya now than in the past.

From a local wholesaler the bolts will go to a regional one. Wholesalers used to take bundles of cloth to dyers and collect the dyed goods from the dyers workshops, and send them on to department stores or kimono shops, but recently this system is breaking down. The wholesalers no longer want to carry the risk of purchasing lots of  cloth, and the dyers are being forced to source their own cloth and buy it before dyeing.

What it Takes to Dye the Fabric

The dyeing processes are complex and exacting work. They admit for no errors. When making stencil-dyed kimono, the production of a perfectly precise repeating stencil is a requisite, and also a paste, usually rice paste, which is made to an exact consistency. This can depend on the humidity and temperature.

The fabric has the paste applied, and then after drying is sized and the colors are painted on with small brushes. The process is repeated several times to ensure a strong color. Some types of dyeing require many stencils to be matched up one after the other. This hand-dyeing may take up to several weeks to complete.

The fabric is put into a steamer and then the paste is washed off. It will be sent to another steamer, who puts it onto a huge rolling steamer which ensures the perfect width and softness is returned to the fabric.

The production of shibori requires an initial sewing and covering of the parts to be resisted from the dye, which are covered with polythene, or placed between wooden plates, or sewn and bound tightly together. They will be immersed in dye and sometimes have spots of color painted on by hand. The tightly sewn parts must be painstakingly removed without any damage to the cloth. This process may be repeated with many colors.

The making of hand-dyed yuzen is also complex. In Kyoto, artisans work on a particular part of the process, such as pasting or drawing the patterns, or applying the ground color. In Tokyo, yuzen dyers tend to work alone and must undertake all the processes themselves. The design is produced and drawn on paper, and then the kimono fabric is loosely sewn up into a kimono. The pattern is drawn onto the fabric with fugitive dye, and then the lines are pasted on by hand.

The dyes are then painted on over several weeks, pasted over and the ground is dyed. After steaming, the paste is removed. Then, these kimono are often then embellished with gold lines, embroidery or other applications. Finally they will be sent to steamers again to return the cloth to the original width.

There are variations on these general techniques and processes.

The Complex Cloth for Casual Kimono

While some of the complex processes in making dyed kimono seem amazing, the production of casual, woven kimono can sometimes be even more mind-boggling.

Sometimes the process can start with growing a particular kind of plant to make threads or dyes. In the case of silk, it usually means reeling the silk off the boiled cocoons by hand.

Sometimes the thread is pulled from floss by hand. This can involve dampening the finger with spit, and pulling and gently twisting the thread. It can also involve just pulling wet floss into a thread from a lump of a squashed cocoon. In both cases the production of the thread itself is a very time-consuming process.

Sometimes dyeing takes place at the cocoon stage, but more commonly the white threads are then dyed. If there is to be a pattern dyed, every thread must be resist dyed in the right place to produce the correct pattern. A repeating pattern is often drawn on graphing paper, and then all the threads are stretched onto boards on a wall and drawn around pegs repeatedly until the whole kimono length of threads is put onto the board. These threads are then marked with a fugitive dye according to the pattern on the graphing paper.

Once the threads are all marked, an artisan will tie the threads tightly with plastic thread to resist the dye that the threads will be dipped in. After dipping, the process could be repeated if the pattern uses a third color. After the threads are dyed they have to have all the ties delicately removed. The threads are then starched and sorted carefully, ready for placing on the loom.

The final process is weaving on a hand loom. This could take up to a year if the pattern is really complex.

If the pattern is an ikat, yasuri, on the weft thread only, or the warp threads only, the process is slightly less complex than if the threads for both directions have to be set up and tied and then dyed before weaving.

Some weavers make unique patterns that are not regular all over the kimono. In this case, every thread must be dyed carefully and placed in its correct position. For some kimono, every single weft thread will be dyed differently, and must be put in the correct place.

The final process for both dyed and woven kimono is careful sewing by hand.

Both woven and dyed kimono are often hand-made with great care and pass through the hands of many different artisans on their way to completion. This painstaking work can take many months, even over a year.

Most of these workers scrape by on a very minimal wage. There are some processes which are sometimes mechanized which brings the prices down a considerable amount. They would be more on a par with boutique or brand clothing.

As previously mentioned, it is partly the distribution system that is responsible for raising the prices of each kimono. As goods pass from wholesaler to wholesaler, and finally to the stores where the kimono are sold, the markups are increased.

A simplistic solution would be to get rid of the wholesalers in the middle, who are certainly eating up the profits. However, the problem is not so simple.

For a small kimono shop in the country, they cannot sell enough kimono of one particular type to order an artisan to make it. Only a wholesaler can afford to buy several of the same or similar types, and then these will be distributed to small outlets. Thus the wholesalers do still have an important role to play in the distribution process.

Likewise the shikaya who orchestrates commissions for customers, both shops and individuals, has an important but hidden role in the process.

Online visibility is increasing opportunities for makers to communicate directly with customers, and this will help both to keep down costs and also ensure that customer needs are met. But direct sales are not possible everywhere.

As a kimono lover, I am hoping for a decent living wage for kimono makers in the future, so that people will continue these wonderfully crafted textiles into the future.