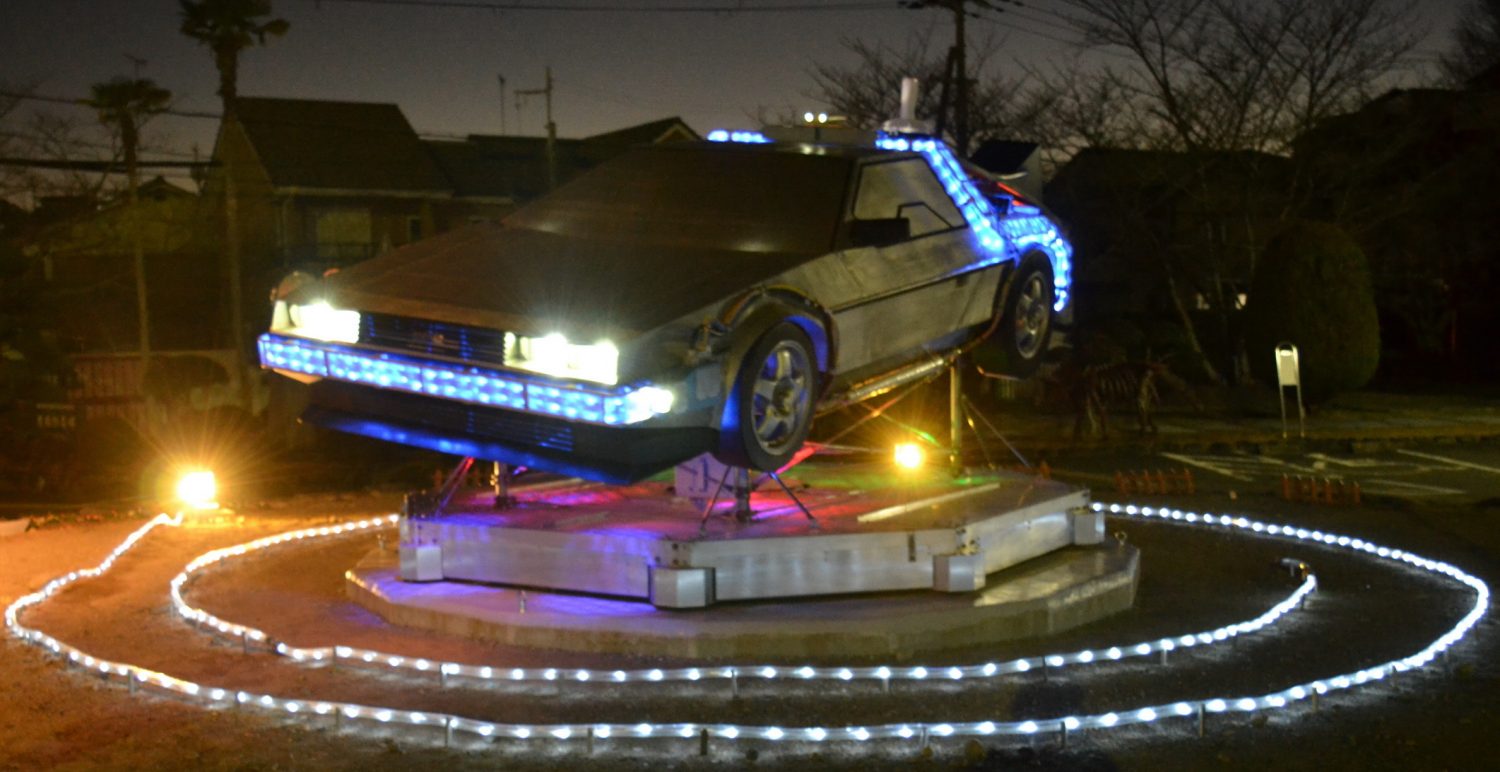 High school students in Wakayama Prefecture have built a replica of the DeLorean time machine from the classic movie “Back to the Future” (1985), placing it outside the school’s front entrance as a monument.

The replica – which rotates four times every weekday to the sound of the “Back to the Future” theme song – was made by students at Tanabe Technical High School, in the city of Tanabe. The project lasted over four years.

“Having something they made on display at their old school should be a special memory for the students,” said Mr. Takai, 51, the teacher who oversaw the project.

The replica is about 4.2 meters long, and weighs approximately 500 kilograms. It consists of roughly 20 rust-resistant aluminum plates, designed to achieve a long-lasting display.

The team referred to information from sources such as the internet to create an elaborate recreation of the famous time-machine car. The base, which is about 4 meters long, is also made of aluminum.

The Wakayama DeLorean rotates for about three minutes every weekday at 9 A.M., 12 P.M., 3 P.M. and 6 P.M. The evening rotation includes an illumination.

Previously, the area in front of the school’s front entrance was thick with tall leafy plants. However, they were cut down in 2015 because there was a risk of collapse due to insects eating away at the foliage.

In 2016, the school wanted to place something symbolic in the vacant area, inspiring Mr. Takai to suggest the DeLorean replica: “The automobile is Japan’s major manufacturing asset. Having a car that features in an inspiring movie would be ideal.”

The team started work in 2016. From about September onward, students in Mr. Takai’s senior-year class began construction using aluminum plates. After completing the exterior, the replica was revealed at a school festival later that year.

However, the team had not managed to recreate the fine details, and the inside of the car was hollow. Soon after, the students who had worked on the project graduated from Tanabe Technical High School.

Subsequently, members of the school’s craft and technical drawing club took over the mantle. They worked with other students across all grades, and managed to complete the car body and stand by the spring of 2020. With only the driving mechanism and electric wiring remaining, the team had planned to finish the project by Golden Week 2020.

However, the COVID-19 pandemic meant that the school was temporarily closed between spring and mid-June 2020, ruling out further work. Moreover, summer vacation was shortened considerably. Nevertheless, the team found time after school hours and on weekends, and managed to complete the project in December 2020.

The team members were particularly pleased when they reached their goal. “I’m glad we managed to complete something that our senior students worked on for years,” said 16-year-old Yoshiaki Hashimoto.

Meanwhile, Ryo Tanimae, 17, revealed that “there were some things I didn’t understand, but I learned those as I worked.” Meanwhile, Masaki Hirohata, 16, said: “We have completed something our senior students worked hard on.”

(Read the original article in Japanese at this link.)