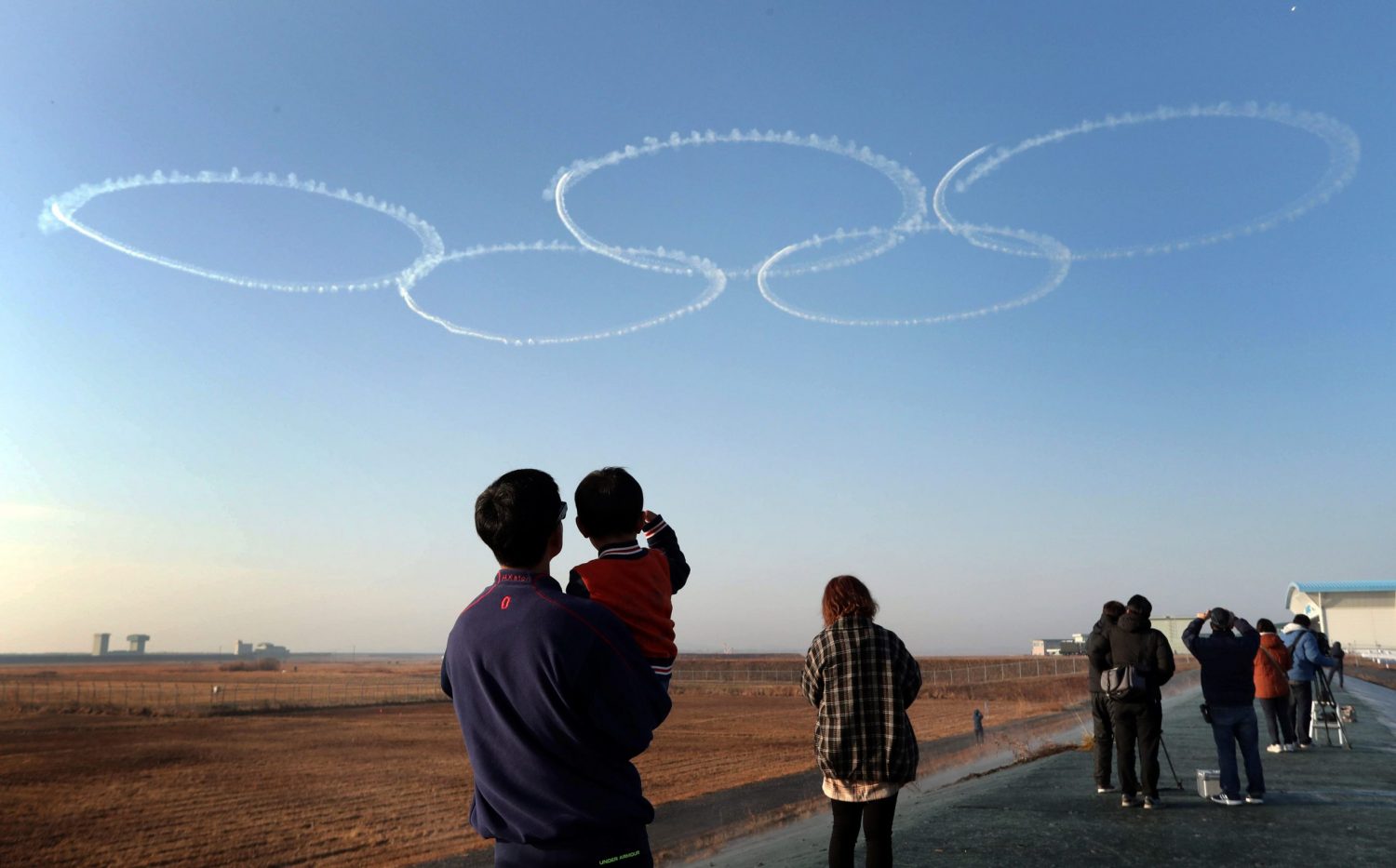 Blue Impulse of the Japan Air Self-Defense Force reproduces the five Olympic Rings In the sky over JASDF Matsushima Air Base on January 24, 2020 = in Higashimatsushima City, Miyagi Prefecture (Photographed by Kenji Suzuki)

Japan’s own Blue Impulse aerobatic demonstration team will fly over Tokyo for the opening ceremony of the Tokyo Olympics on July 23, and for the Paralympic Games on August 24, the Japan Air Self-Defense Force (JASDF) announced on June 24.

According to the  JASDF, they will be using smoke in five colors ー blue, yellow, black, green, and red ー to depict the interlaced rings symbolizing universality on the opening day. Detailed flight routes and time zones will be revealed at a later date.

The Blue Impulse is based at Matsushima Air Base (JASDF) in Miyagi Prefecture’s Higashimatsushima City, located in Northeast Japan. Eighteen years ago, I covered a training session aboard the aircraft used by the aerobatic team. (T-4)

I photographed the squad doing the so-called “Delta Roll,” watching as the group of sleek aircraft executed somersaults and circular movements in unison above the sea, off Mount Kinka in Miyagi Prefecture.

Nowadays, athletes and show business personalities like Ayako Imoto have been allowed on board, but at that time, it was unprecedented for ordinary people to ride in the plane. It took me more than six months of negotiations with the Air Self-Defense Force to get their approval.

Before heading to Matsushima Air Base, I had to undergo a “chamber test” (a decompression pressurization test) at a designated hospital. The test is required by Tachikawa Air Base to make sure you’re physically fit enough to fly in the jet fighter.

The pilot was in the front seat of the T-4, while I got in the back seat, dressed in a G suit, an outfit worn by aviators to prevent blacking out when subjected to significant levels of gravitational force from flying at high speed.

Ominously, a crew member warned, “Do not pull the yellow lever between your legs no matter what. If you feel sick and want to throw up, take off your oxygen mask.”

It turns out the yellow lever is for emergency escape, and will be operated by the pilot in an extreme situation. On the other point, if you throw up while wearing an oxygen mask, the tube will be blocked and the aircraft cannot be used for several days while it undergoes a special cleaning.

When I got on the T-4 aircraft, the blue sky opened up above, giving me an incredible feeling of being in space such as I had never experienced before.

During the flight, the lever positioned between my legs made small movements repeatedly, and I could clearly see the pilot carrying out maneuvers in the front seat.

When the plane turned upside down, I felt increased pressure all over my body. It was a completely different sensation from the momentary force one gets riding a roller coaster.

It was a valuable experience for me as a news photographer to observe the Blue Impulse so closely as they moved in unison as their wings swayed gently.

In May 2020, a special flyover to thank medical personnel throughout Japan who dedicated themselves to caring for the sick as the world became enveloped in the COVID-19 pandemic:

For the Tokyo Olympics torch arrival ceremony In March 2020:

Flying for the Kizuna Fesstival to aid in the recovery of the Tohoku region 8 years after the 2011 triple disaster of the Great East Japan Earthquake, tsunami and nuclear disaster: