[Hidden Wonders of Japan] Calling All Flower Fans: Where to See Wisteria in Tokyo 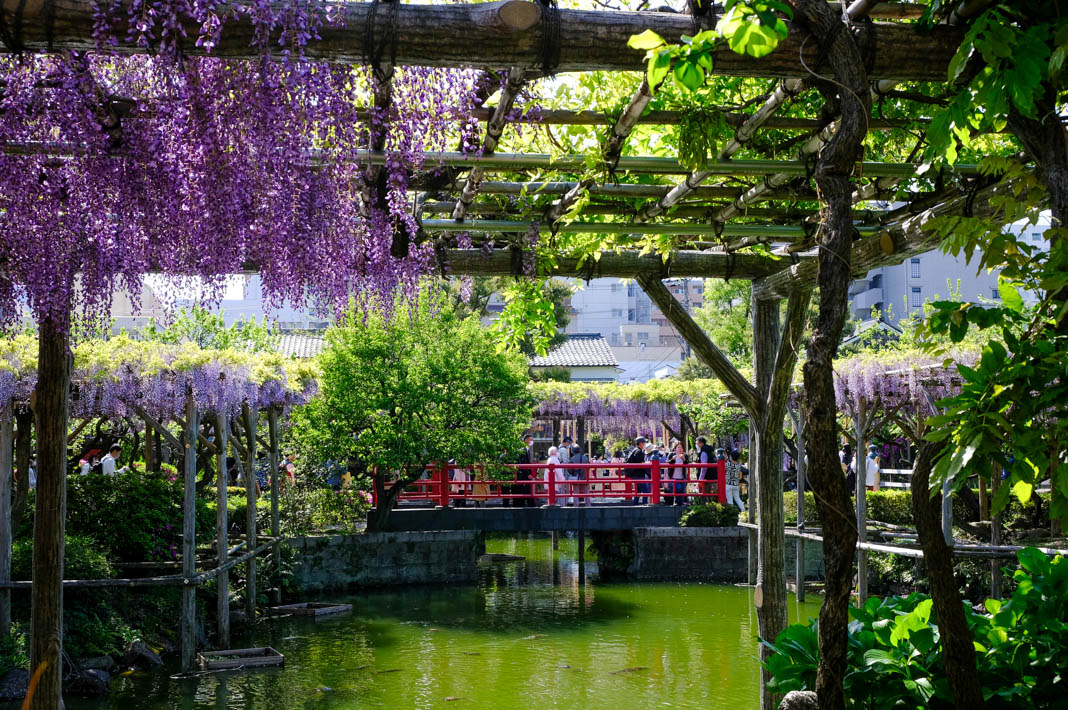 We are now nearing the end of April, and the sakura in Tokyo have already come and gone in what felt like a lightning fast season. If you didn’t get a chance to get in your flower fix, don’t fret!

Springtime in Japan sees the constant blooming of various seasonal flowers, and right now it’s the wistful wisteria’s turn. These lovely purple flowers are native to Japan and grow on vines, so throughout the country trellises have been erected for the wisteria to climb, creating magical canopies that burst into bloom from mid-April to mid-May.

These trellises are commonly found at shrines as well as parks and gardens throughout Japan, including within Tokyo. Here are some of the best places to view them in and around the capital.

Kameido Tenjin Shrine in Koto Ward is probably the most famous place to see wisteria in Tokyo.

On the grounds of this Shinto Shrine is a large pond with picturesque red bridges and dozens of trellises of wisteria vines. The vines here are quite old, having been planted in the Edo period, and their beauty has been captured in many ukiyo-e prints and traditional artwork.

Balancing the old with the new is the Tokyo Skytree looming above, which now makes for a coveted Instagram shot of the modern tower with the delicate purple blossoms.

In celebration of the wisteria, the shrine holds an annual festival, which runs from April 17th until May 5th, 2021. Usually, there is an evening light-up installation so that the flowers can be enjoyed at night, but that event has been canceled for 2021 due to the state of emergency declared for Tokyo and other major metropolitan areas.

However the outdoor festival ambience can still be enjoyed during the daytime as you snap pictures of the wisteria with backdrops of ponds, bridges, and the Skytree.

To get to Kameido Tenjin Shrine, take the Chuo-Sobu Line to Kameido Station. The shrine is a 15 minute walk from the station and is open from 6:00-17:00.

Lovely Hie Shrine is classic Tokyo, a venerable Shinto shrine located high on a hill amid the hustle and bustle of the businesslike Akasaka neighborhood. On the grounds is a long trellis of wisteria, and the purple flowers and green leaves make for a striking contrast against the red color of the main hall of the shrine.

This pretty place is a popular spot for photo shoots of weddings or young girls dolled up in kimonos. Hie Shrine is a convenient walk from Akasaka, Akasaka-mitsuke, or Nagatacho stations. The shrine is open from 6:00-17:00.

Shinjuku Gyoen National Garden is a massive plot of greenery right in the middle of the commercial Shinjuku district, and is a pleasant respite from the chaos that surrounds it. With a few different styles of gardens, there is always something blooming here.

The park is closed for the third state of emergency, currently scheduled through May 11, 2021, but wisteria should still be in bloom when it reopens. So once the state of emergency has ended, consider a visit to get some lovely photos and take a nice city break.

There are two wisteria plants in Shinjuku Gyoen. The first is by the upper pond in the Japanese garden, which also provides a great opportunity to experience a traditional Japanese garden. The other is by the Taiwan Pavilion, a rather unexpected sight to find in Japan.

Shinjuku Gyoen National Garden’s hours – after the state of emergency has ended – are from 9:00-17:30. It is closed Mondays, unless Monday is a holiday, in which case it is closed the following day. Admission for adults is ¥500, and the garden can be accessed via the Marunouchi Line to Shinjuku-Gyoemae Station or take a short walk from JR Shinjuku Station, south or east entrances.

Flowers in the Suburbs of Tokyo and Beyond

Another shrine with a wonderful wisteria display is Kokuryo Jinja, a shrine in Chofu in West Tokyo. In fact, the wisteria plant at this shrine is rather special. Known as the “Sennen Noto,” this wisteria is about 500 years old and is enshrined within the shrine grounds.

Although it’s not technically in Tokyo, one cannot talk about wisteria in Japan without mentioning Ashikaga Flower Park in Tochigi Prefecture.

The park is open year round, but is perhaps most famous during the spring season for their Great Wisteria Festival, which promises to have “the most beautiful wisteria in the world,” according to their advertising campaign. This very well may be true, as the park boasts over 350 wisteria trees and 5,000 azaleas which bloom during the festival. There are seemingly countless wisteria trellises, tunnels and other displays in the park, where you can see not only the usual purple wisteria, but also pink and white ones as well! If this doesn’t seem incredible enough, in the evening the plants are lit up, turning this gorgeous garden into a mystical wisteria wonderland.

The park is open from 8:00-20:30 Monday through Thursday, and Friday to Saturday have slightly extended hours from 7:00-21:00. The ticket prices are a bit complicated, as the staff appraise the quality of the flowers daily and charge accordingly. Expect to pay between ¥900-¥1,800 in the high season from mid April to the end of May.

To get to Ashikaga Flower Park, take the Nikko-Kinugawa Kegon train from Kitasenju Station to Tochigi Station and transfer to the Ryomo Line, which goes directly to the park. The journey is around 2 ½ hours from Tokyo.

Although we experienced an unusually early and fast sakura season, there are still plenty of spring flowers to be had in Japan. Take advantage of the warm and sunny days and bask in the beauty of wisteria, another beautiful flowering plant native to Japan.

As with all activities in Japan during the state of emergency and beyond while COVID-19 is a concern, be considerate of others. Stay home if you are not feeling well, always wear a mask, and maintain social distancing.