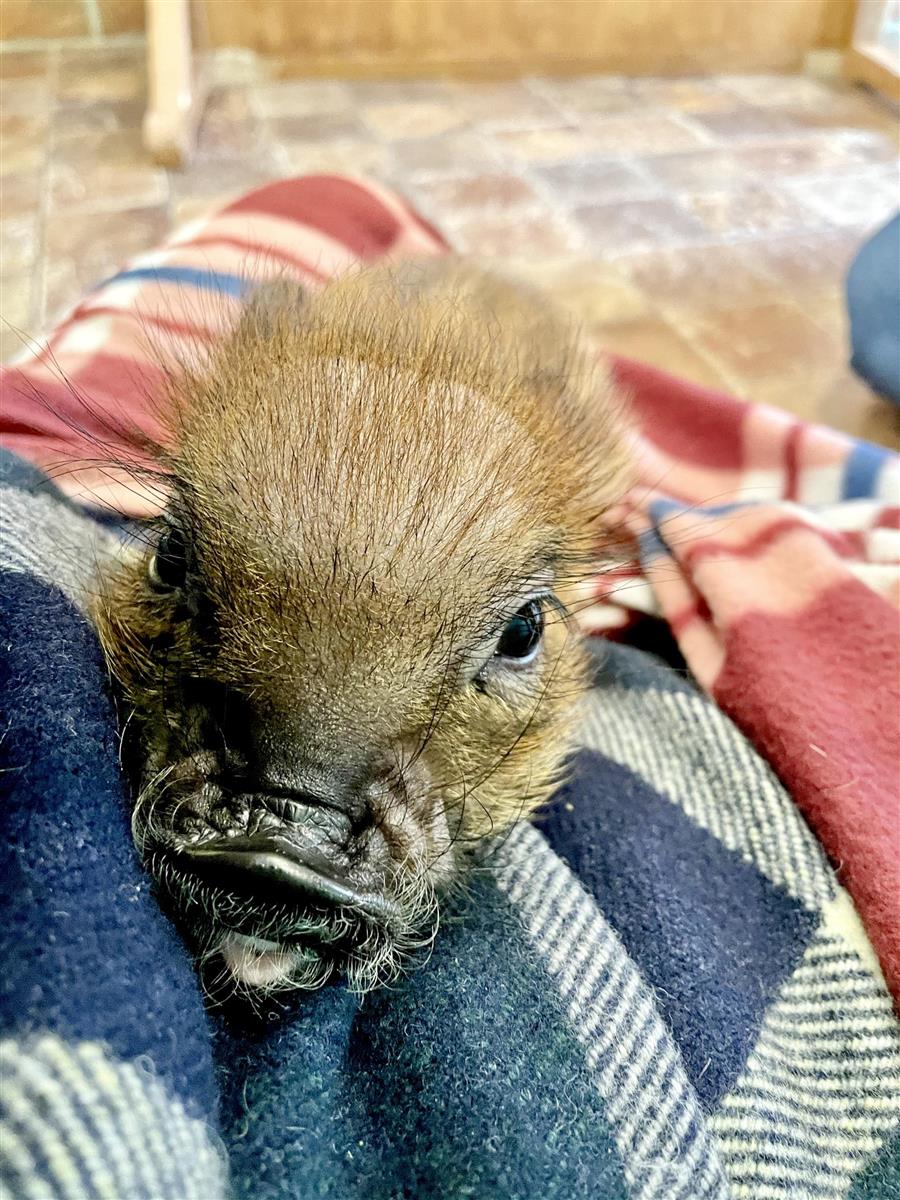 A micro pig spots me sitting down, waddles over as quickly as its short legs will allow, then clambers onto my lap. As I hold and stroke its baby-sized body, it looks up at me with puppy dog eyes and falls asleep. I am lost for words at the unbearable cuteness of the animal.

Japan’s first micro pig cafe, Mipig Cafe, is a place to discover the joy of pigs and reaffirm the preciousness of life through interacting with the little creatures.

I visited the branch in Tokyo’s Harajuku neighborhood, in Shibuya ward, located along a narrow path parallel to Takeshita Street. To find it, I followed the cute oink-oinks and squeals coming from a cafe made of brick, and found myself being welcomed by ten little pigs.

Micro pigs, which originate in England, weigh up to 40 kg each, which is significantly smaller than pigs used for livestock, which weigh about 300 kg, and even more than mini pigs, which were popularized by the film Babe (1995).

Lauren was born smaller than average and now weighs 1.4 kg. When I felt Lauren’s warmth, a cozy 38 degrees, I could sense my preconception about pigs starting to change.

The company SaLaDa in Tokyo’s Minato ward breeds and sells micro pigs through its business Mipig, and began importing micro pigs in 2018. Their micro pigs are bred on farms in Yamanashi Prefecture and other locations, brought to the cafe, then handed over to their new owners. In 2019, they opened their first cafe in Tokyo’s Meguro neighborhood as the first animal cafe in Japan to specialize in micro pigs. By April, they had opened their fourth cafe in nearby Saitama Prefecture.

The cafe allows customers to interact with micro pigs and also functions as a nursery school. The pigs get ready to enter human society by becoming accustomed to people through interacting with the customers and learning to use the toilet. The cafe uploads their daily life on Instagram to “nurture the sense that everyone is involved in their upbringing.” Many new owners continue to post their pig’s progress so that fans can continue to watch over their growth online.

They are intelligent, non-aggressive, and clean. There are no unpleasant body odor or allergy concerns. They are also communicative, expressing their emotions in more than 20 kinds of calls.

On the downside, not many veterinary clinics or insurance plans cover micro pigs, and owners are required to contact a livestock hygiene service center because micro pigs are deemed livestock. They have poor thermoregulation and satiety control, so managing their diet is difficult. However, Mipig provides support for owners through an app by offering advice and specially formulated food. They aim to “support the pigs from birth to all aspects of their daily lives, and help the owners in whatever they need.”

To prevent abandonment and impulse purchases, all potential owners go through a strict screening process, and purchases can only be made by appointment. Overbreeding is avoided by maintaining a backlog of applicants.

Kitagawa hopes that customers will “become more curious” about ecology and the environment by spending time at the cozy cafe. She talks about a future where humans and pigs live in harmony and happiness. “I hope more micro pigs will be given a new life as someone’s beloved pet.”

May all the micro pigs I hugged at the cafe find happy new lives with their wonderful new owners!