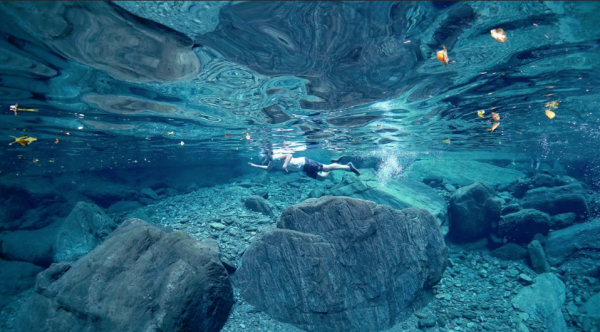 The location is Niyodogawa Town, in Kochi Prefecture’s Yasui Valley. Where we are now, the water, after having come downstream, is crystal clear while reflecting the blue sky overhead.

Underwater camera in hand, I dive below the surface. The piercing coolness of the water makes me forget the warm temperatures of summer, as the underwater scenery sprawls straight ahead. With everything bathed in a blue light, this quiet world seems to extend endlessly.

Niyodo river flows headwaters near Mt. Ishizuchi –  the highest peak in Shikoku – and passes through seven municipalities in the Kochi area before gushing out in the Pacific Ocean. 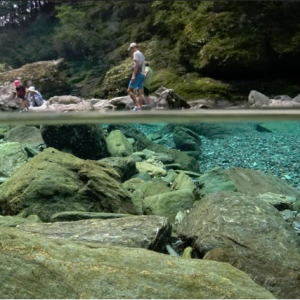 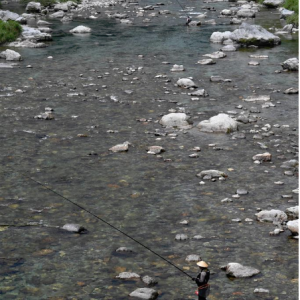 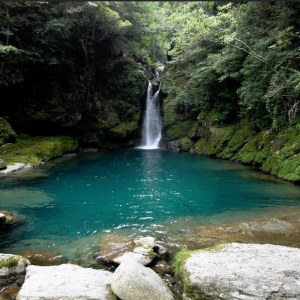 According to a survey conducted by the Ministry of Land, Infrastructure, Transport and Tourism, the river boasts particularly high water quality, and in recent years the river and its tributary streams have gained popularity, earning the nickname “Niyodo Blue.”

“I shoot here about 350 days a year, but every time I am moved by the scenery.” These are the words of Nobuyuki Takahashi, 73, a cameraman who works largely in the Kochi area. He’s thought to be the person who accorded the nickname to the Niyodo River.

The location was featured in a television program about eight years ago, and the name which was before only known among connoisseurs then spread across the whole country. 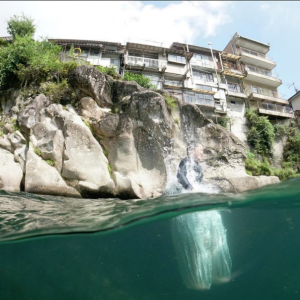 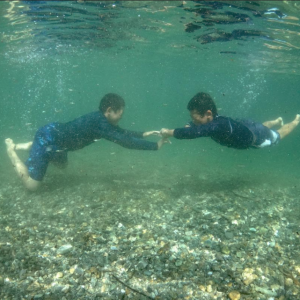 So why is the water so clear here? Takahashi gives several explanations, such as the fact that there is a lot of rain. And, with many ups and downs in the landscape, mud and impurities tend to wash away easily.

In a poetic way however, Takahashi added, “If the person who faces the river has a kind gaze, the water becomes cleaner. This is because the river is said to be ‘the mirror that reflects the heart of the people.’”

The affluent Doigawa river also flows into the same Niyodogawa Town.  When we visited the area, the gleeful voices of children playing could be heard as we enjoyed the soothing scenery reminiscent of summer.

There is a committee in charge of “The Restoration of the Greenery and Clean Streams of the Niyodo River” in the town.

Mikio Sonoyama, 66, part of the executive office, told us, “The river is really clean now as well, but I am told it was even clearer before. I would like to bring it back to its original state.”

The committee was formed when the community protested construction of a dam across the Doigawa River. In an attempt to help children familiarize themselves with nature, the group holds volunteer cleanup activities and ayu fishing events along the river. Sonoyama explained:

Those who are most sensitive to the change of the environment are those who observe the river closely, meaning for example the fishermen. If we don’t increase the number of people who are interested, we will not be able to keep the water clean.

Niyodo River is often praised for its beautiful clear water, with a blue that is so deep it almost seems that it must be bleeding from the sky above. Its purity is in fact protected by the warmth of the people living in the Yasui Valley.

Author: Yuta Yasumoto from the Photojournalism Section of Sankei Shimbun