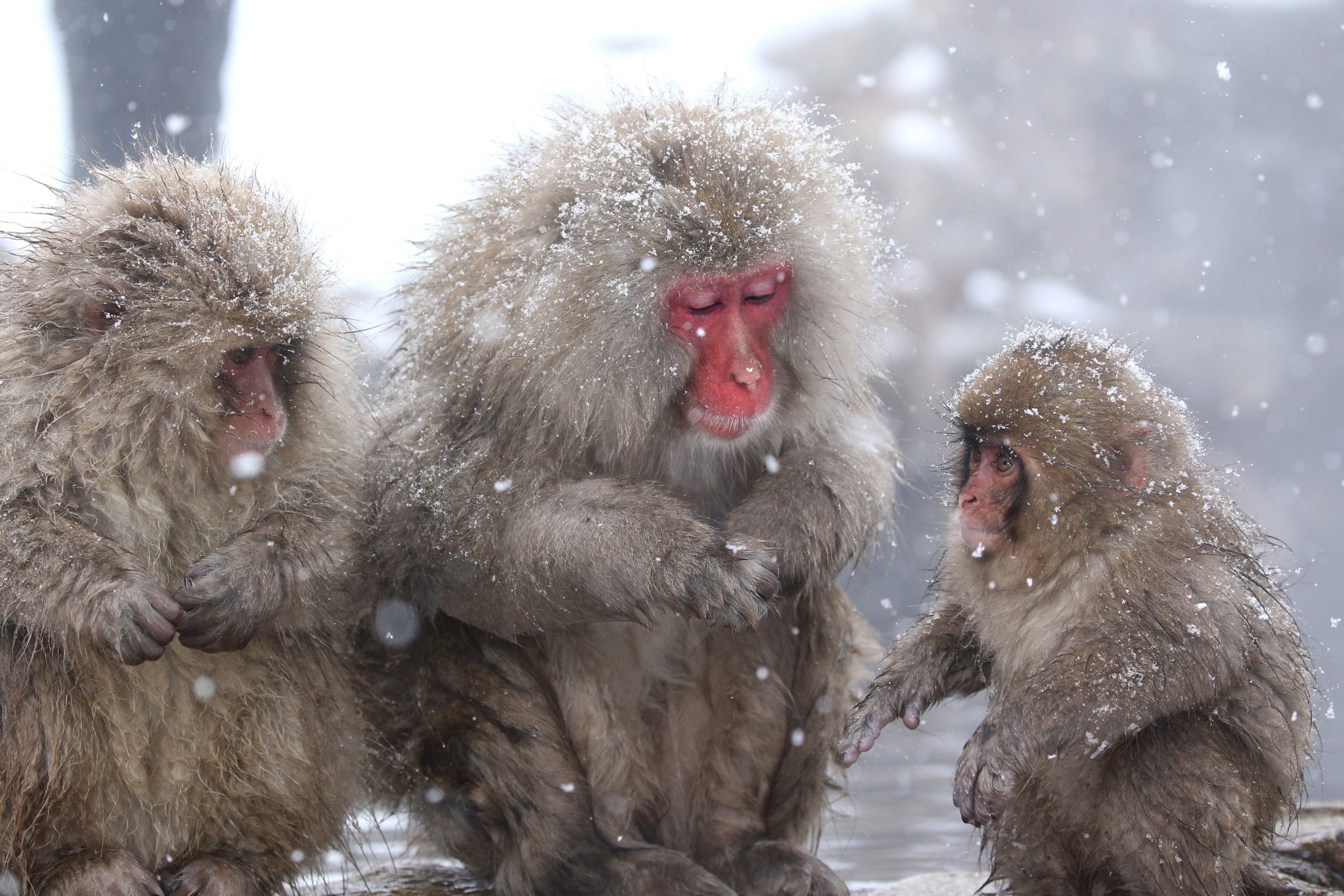 The smell of sulfur gradually seeps through the air, and steam rises up beyond the trees in Jigokudani park. Located in a valley of the Yokoyu River in northern Nagano Prefecture, 267 km northwest of Tokyo, literally, the name means “Hell Valley”.

It is here, among the very steep cliffs and the steam rising off the naturally emerging hot springs, that one can find the Japanese macaque, a breed of local monkeys, ecstatically soaking in the hot water with their eyes closed.

For nearly four months of the year the park is covered in snow, with temperatures often dipping below minus 10 degrees centigrade (14 degrees fahrenheit). About 160 monkeys descend from the steep cliffs and forest to look for food and sit in the warm waters of the onsen (hotsprings) during the day, then return to the refuge of the forests in the evening.

Back in 1964, Satoru Hara succeeded in creating the natural park in a bid to give the monkeys their own space where they would be fed regularly, so they wouldn’t go pillaging food from the nearby farms.  Three years later, an onsen hot spring was added for the monkeys, after they had created an uproar by venturing out to an open-air bath and disturbed some tourists staying in a nearby inn.

The sight of the monkeys in their own onsen in the snow made the cover of the American “LIFE” magazine in 1970, and they became known all over the world as “Snow Monkeys”.

Since then, Jigokudani has become a popular place to observe the monkeys in their natural habitat. It is now one of the prefecture’s leading tourist destinations, visited by more than 200,000 people a normal year.

Despite the popular image of the apes dipping in the hot water, surprisingly only 20 to 30 percent of them actually do so, according to Atsu Takizawa, a 39-year-old staff member at the park. He explains that since they don’t naturally like to wet their bodies, many prefer to warm themselves in the sun or to stay snuggled together.

Inside the park, it is not only adult monkeys that can be seen soaking in the hot water. Their young are also there, clinging to their mothers backs, playing with tree branches, frolicking on snow-covered slopes, or even just “grooming” each other.

In the Spring of 2020, twice as many monkeys were born compared with previous years, and they seem to be growing fast. They can be seen running energetically up the mountain, sometimes getting scolded by the adults. They are learning to cohabitate in a group.

Seeing the monkeys huddled together, this writer couldn’t help wondering how they would see us humans, keeping each other at a distance because of the corona pandemic?