After more than 250 years of rule, the Tokugawa government’s power had begun to wane. The Japanese people had been longing for modernization. Following the arrival of Commodore Perry and the Black Ships in 1853, the Bakufu had succumbed to the pressure of opening its doors to the West.

The opening of Japan to the West also gave rise to the imperialist and anti-foreigner movement, Sonno joi (Revere the Emperor and expel the barbarians). By the spring of 1863, the wave of resentment towards the Tokugawa Bakufu had reached its peak, and bands of ronin (masterless samurai) were roaming the streets of the imperial capital of Kyoto in a rampage of murder and assassination. Kyoto was described as a “sea of blood.” In an effort to strike fear into the hearts of all those who opposed the imperial loyalists, the heads of the victims would be displayed on poles along the riverbanks.

During this period, the Aizu clan from Mutsu province (Fukushima prefecture) was under the command of ninth generation lord Katamori Matsudaira (1836-1893), a cousin of the shogun, Yoshinobu Tokugawa. When Kyoto became engulfed in violence, Yoshinobu sent Katamori up to the capital as military commissioner to police the area and protect the Emperor.

In addition, the Tokugawa shogunate, in an extra effort to take control of the dire situation in Kyoto, formed a militia of swordsmen to police the streets of Kyoto to restore order and crush any opposition to the government. Armed with official sanction to kill by the Bakufu, they used this to its full intensity — becoming a most-dreaded force in this turbulent period of Japanese history: the Shinsengumi (Newly Selected Corps).

The group went through several name changes before finally settling on Shinsengumi. It is said that it was Katamori who gave them the name, after reassigning their duties in Kyoto and presented them with swords. Two of the leaders of the Shinsengumi were the famous swordsmen Kondo Isami (1834-1868) and Hijikata Toshizo (1835-1869). 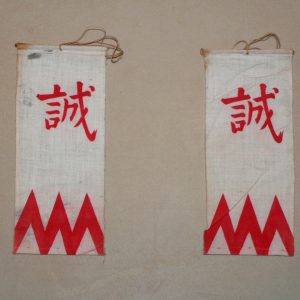 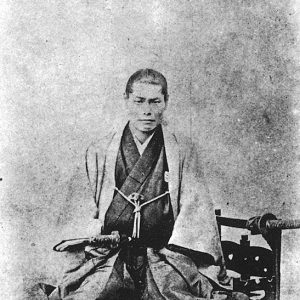 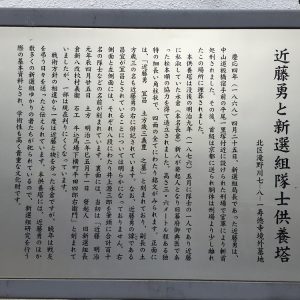 Explanation of Kondo Isami and Shinsengumi

Unfortunately, despite the Shinsengumi’s loyalty to the Emperor and the shogun, they ended up on the wrong side of history during the Meiji Restoration, when the tide turned against the Tokugawa Shogunate. The bravery and loyalty demonstrated at that time by the Shinsengumi has since been recognized as a pinnacle of loyalty, and their story has been told countless times in books, dramas, manga, and animé. The character on their banner, Makoto 誠 (sincerity), illustrates the sentiment very well.

Kondo’s birth name was Miyagawa Katsugoro. He was born the son of a farmer in Chofu, western Tokyo. After fighting and defeating thieves who had broken into his family home, he came to the attention of Kondo Shusuke, the third-generation master of the Tennen Rishin Ryu school of fencing. The childless Shusuke had been searching for an heir to continue the school’s lineage and subsequently adopted Isami in 1849. Then, on the 30th of September 1861, he formally took the name of Kondo Isami when he accepted the position as the fourth-generation head of the school. In 1863, Kondo Isami was appointed one of the heads of the Shinsengumi, along with Hijikata Toshizo and Serizawa Kamo, after their previous group, the Roshigumi, was disbanded.

Following the alliance formed by Satsuma and Choshu forces (the Satcho Alliance), the newly-formed Imperial Forces crushed any opposition. The Shinsengumi were defeated, and Kondo Isami was captured and executed (by beheading) at Itabashi (Tokyo) as an insurgent in 1868. There are also memorial stones for Kondo Isami close to Tokyo’s Itabashi station, where he was executed.

Kondo’s head was transported to Kyoto as proof. His body was interred at Ryugen-ji Temple in Mitaka (Tokyo). However, his head was stolen in Kyoto, but is claimed to be buried at Hozo-ji Temple in Okazaki in Aichi prefecture. According to Aizu-Wakamatsu locals, it is said that the person who stole his head was from Aizu, and the head, along with another sword of Kondo’s, was brought to Aizu and buried in Tennei-ji Temple (Aizu-Wakamatsu). Today, there is a monument to the fallen of the Boshin War, along with a separate gravestone dedicated to Kondo, in Tennei-ji. 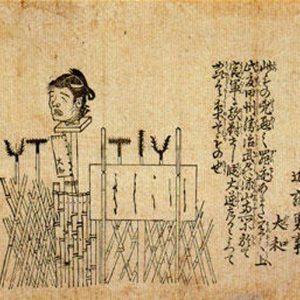 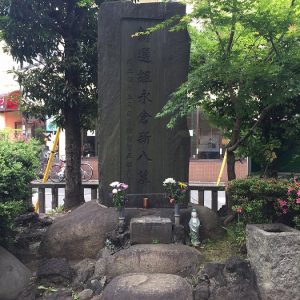 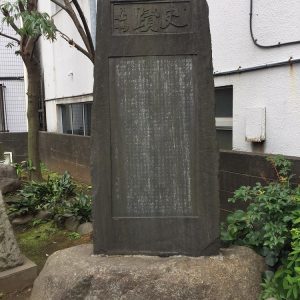 Kondo was famously said to own a sword by the most famous swordsmith of the early Edo period, Nagasone Kotetsu.

Nagasone Okisato Kotetsu was formerly an armor maker who turned to sword making. His name was carried on by his student, Nagasone Okimasa (2nd Gen. Kotetsu). Swords made by these smiths were known for their cutting efficiency, and became very popular masterpieces. Swords by Kotetsu are said to have been owned by Ito Naosuke and Katsu Kaishu, among others, and several works by Kotetsu have been designated as Important Cultural Objects. However, with the fame and popularity of many swordsmiths, their works are often faked. It is often claimed that the Kotetsu owned by Kondo Isami had a fake signature, but the sword’s whereabouts remained unknown.

A sword was listed on an online auction in 2019 as a late Edo period-signed katana in shirasaya (plain wooden sleeping scabbard) by Nagasone Kotetsu Okimasa (2nd Gen. Kotetsu). The inscription on the shirasaya that houses the blade states, “This is Kondo Isami’s Katana.” It was listed in July 2019 and sold for approximately ￥950,000 JPY (about $8,890 USD). The inscriptions on the shirasaya are thought to have been written by Meiji period (1868-1912) politician Kaneko Kentaro (1853-1942). It states that the sword was passed by Kondo to the Kanagawa-juku Nakamura family, and was given to Kaneko by the then-head of the family, Nakamura Genbe.

The winner of the auction contacted Shinsengumi sword researcher Toshina Gon, 68, who said that it was recorded in Kanako’s memoirs, written in his later life, that he had received the sword from “Shinagawa-juku Nakamura Genbe,” and that he had taken the sword and displayed it at a Kotetsu exhibition in 1903. 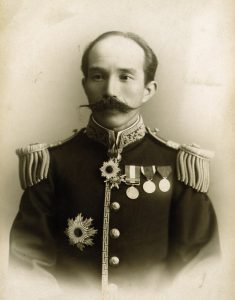 Kentaro’s granddaughter, Kaneko Hiroko, 65, was asked about her grandfather’s sword. She said, “My mother told me that after my grandfather died, my grandmother said, ‘How long are we going to keep this people-killing kitchen knife? it’s evil!.’ So, it was sold to an antiques dealer.” Hiroko went on to say that it looked like her grandfather’s writing, and that he had had a propensity for putting inscriptions on objects, often writing inscriptions on boxes, picture frames, folding screens, and scroll paintings.

The sword itself is inscribed in the tang with “Nagasone Kotetsu Okisato,” but appears to be a fake signature that was added to a previously unsigned Edo period (1600-1868) sword. The sword that Kaneko Kentaro displayed at a Kotetsu exhibition was praised at the time in the Asahi newspaper as “a wonderful, blade with a clear steel structure.” However, Shinsengumi sword researcher Toshina Gon states that, “When you actually see the sword in hand, it is obvious that the signature is spurious.”

Up until the early Meiji period, the Kotetsu of Kondo’s was not considered to be a fake. However, in modern times it is commonly said that “Kondo’s Kotetsu was a fake.” When asked about this, Gon says:

This is possibly because everyone knew that Kondo’s Kotetsu sword owned by Kaneko Kentaro was fake, so it may have become a widespread rumor that Kondo’s Kotetsu sword was a fake. However, in the Meiji period, it was thought that there was no reason for an “insurgent” leader of the Shinsengumi to have owned a real Kotetsu, as they were very expensive, which in turn supports the theory of the likelihood of it being a fake.

However, it is said that Kondo Isami owned a number of blades as the Shinsengumi were given swords by both the Bakufu and by Matsudaira Katamori. This fake was probably among them, but it is also possible that the Kotetsu he used at the Ikedaya incident was real.

Toshina Gon’s research on the Shinsengumi and their swords is published in his book, Shinsengumi-shi Saiko to Ryoyu Token Dan: Shinsengumi History Reconsidered and Conversations about the Swords of Kondo Isami and Hijikata Toshizo (Fukyo Doji Publishing House, 2020, Japanese).

For other articles on Japanese swords, see the articles in our Sword Column, at this link.