Shigeru-san, We Will Not Give Up Until Megumi and all Abduction Victims Come Home 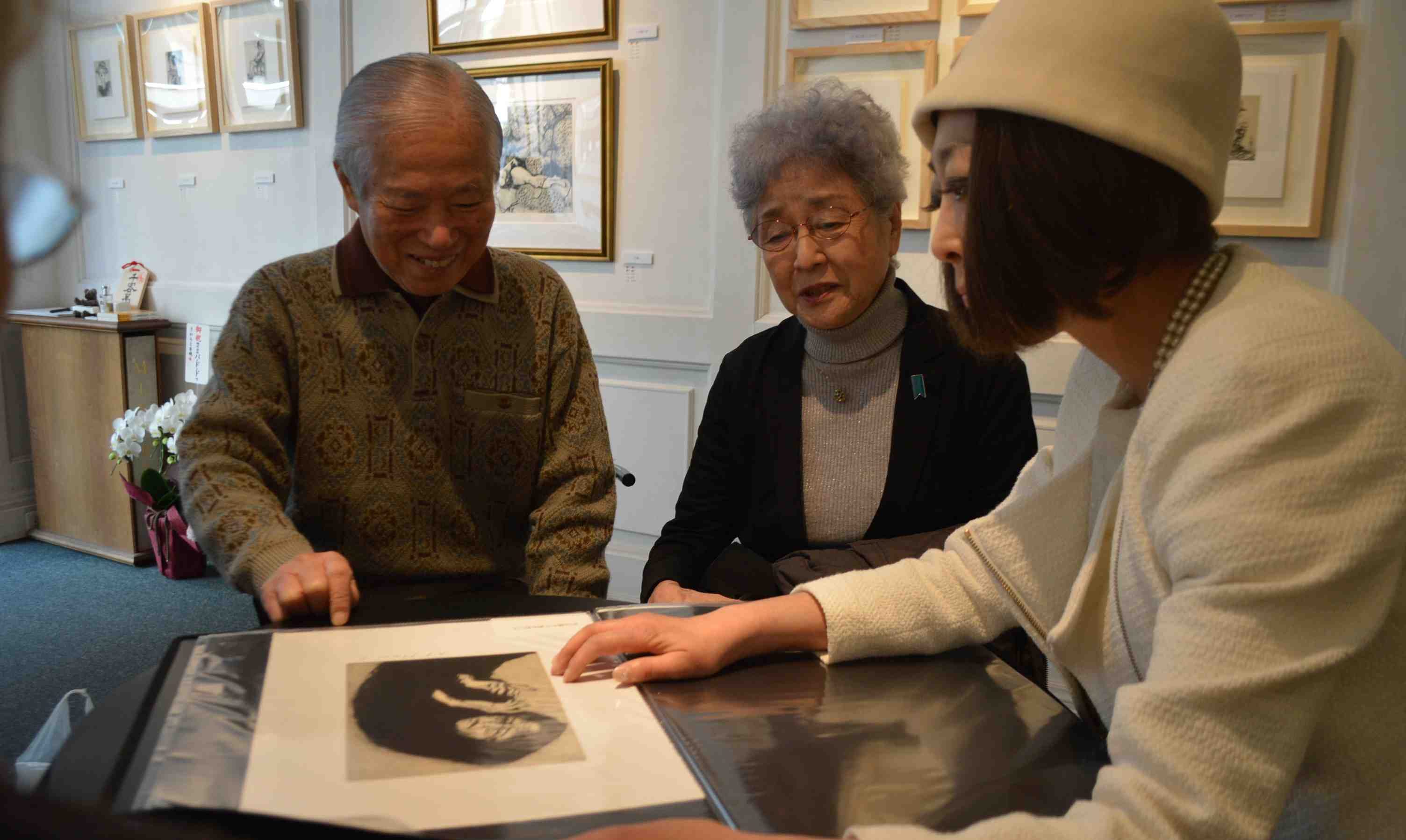 This essay is dedicated to Mr. Shigeru Yokota (1932-2020), who fought for victims abducted by North Korea.

“Congratulations on your wedding! There will be many things that happen in your lives, but it is important to take them on together and strive to be a couple that everyone can admire.”

So spoke Mr. Shigeru Yokota on the morning of my wedding, June 9, 2013. I had been at odds with my own parents for a long time and refrained from asking them to attend my wedding. I mentioned this to Mr. Yokota and his wife, and they kindly offered to stand in the roles of the bride’s father and mother.

I first learned of Mr. Yokota and his wife just after the Lower House elections of the Japanese Diet in 2000. I was attending the startup ceremony of Mr. Shingo Nishimura, who was running from Osaka’s 17th district, gathering information for my weekly regular manga critique about political problems in Japan. While there, Mr. Hiroshi Miyake — then an alderman for Sakai City, later to become a member of the Lower House ― strongly suggested I do a piece on the problem of North Korean abductions of Japanese citizens. At his urging, I attended a roadside speech near Yurakucho Station in Tokyo a few weeks later. It was there that I first met the Yokotas.

Their daughter Megumi had been abducted by North Korea when she was 13 years old. I was born in 1965, which makes me one year younger than Megumi. In addition, I was told Megumi loved to draw, and since I am a manga artist, I couldn’t help but feel a common bond with her. Perhaps because of this, Megumi’s parents were very kind to me.

From that point on, I started drawing manga and writing articles that criticized the state crime of abductions by North Korea.

There was backlash, and even overt threats, towards me for what I wrote, but I felt compelled to continue. To give in would mean condoning these crimes against humanity.

Finally, in 2002, the Japanese administration of then-Prime Minister Junichiro Koizumi forced North Korea to come to grips with their crimes, resulting in the repatriation of five victims. It looked like a good beginning, and everyone had their hopes up. But other victims, including Megumi Yokota, have yet to be returned and this situation has not been resolved.

The North Korean government continues to insist that all of the other abducted victims have died. As “proof” of Megumi’s death, they sent what they insisted were her remains. But DNA testing proved they were false, once again dashing the expectations of the Yokotas.

Through immense and unimaginable stress, the Yokotas have spent more than 40 years of their lives hoping for their daughter’s return. They have spoken at over 1,400 gatherings around Japan, seeking the return of their daughter and abducted loved ones of other families, garnering more than 13 million signatures from supporters. They arrived at my wedding after delivering a speech in front of Kawasaki station in the wee hours of the morning, and then afterward hurried off to Haneda Airport to go to Fukuoka, where they were scheduled to talk about the abductions.

In 2005, perhaps as a result of him driving himself so hard, Mr. Yokota developed thrombocytopenic purpura, a difficult disease to treat, and resigned as chairman of the Association of Families of Victims Kidnapped by North Korea (AFVKN).

In 2006, I myself developed a few incurable diseases. I had been literally working myself to death, perhaps in part to forget the feud with my parents. I had pushed myself to the brink for 20 years and could no longer offer support to the Yokotas. I had little money, was in deep despair, and felt very alone.

It was the Yokotas who came to my rescue. They took me out to eat every couple of months, always offering assuring words of encouragement. No longer able to draw pictures, I took up singing. They would often come to hear me sing, always sitting in the first row of the audience. So I sang songs for them in earnest, hoping for the return of their daughter, Megumi. 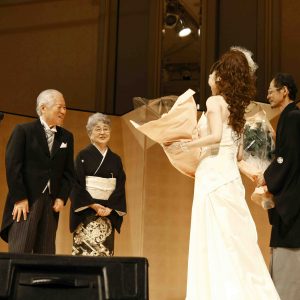 When I met my present husband, he was still married. I talked this over with Mr. and Mrs. Yokota. And when he proposed to me after his divorce, I then asked them if they would agree to our getting married. I had grown to admire both of them, perhaps even more than my own parents. I wanted to do something for them in return for their warmth and generosity. In 2017, I gave a charity concert for the return of the abduction victims at Suntory Hall, and I held an exhibition at the Gallery Yoshii in Ginza, primarily consisting of portraits of the Yokotas.

Mr. Yokota always smiled. Even at the saddest of times. His smile was somewhat unique, and it may be that he hid his sadness behind it. But there were also times that his determination showed through. You could see it in his eyes. I decided to carve both of these in copper art prints.

While I was in the hospital, I penned lyrics for the original song “Blue Legend,” offering hopes and prayers for the return of all  the abductees. With the help of many friends and acquaintances, I was able to translate the lyrics into other languages. I also started a homepage in English to spread information about the abductions by North Korea.

After so many years and the effects of aging, the Yokotas found it difficult to travel around Japan and give speeches, so I suggested trying to use the internet, and helped them make videos. But it wasn’t enough, and there was little reaction.

During an exhibition of my copper prints and oil paintings at the Gallery Yoshii in 2017 I seriously felt the need to hurry things up. Up until that time, Mr. Yokota had been very active, but it was clear that he had difficulty walking and even talking. 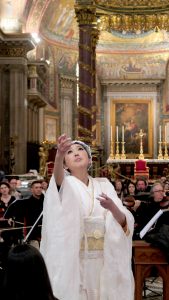 To bring the abductions to the world’s attention, I came upon the idea of performing my song “Blue Legend” at the Vatican. You might even say it was a revelation. “Who knows?” I told myself, “Why not perform at St. Peter’s Square, take a video, and upload it to YouTube?” Crazy as it may seem, I thought if I could drum up interest across the Christian world, there just might be the possibility that if people around the world would demand resolution, the Japanese and North Korean governments would have no choice but to take action.

Sure, it was a crazy idea, but many kind people who understood the importance of this problem offered their assistance. With their help and that of Cardinal Monterisi and Masahiro Shimba, on March 11, 2018, I actually got to sing “Blue Legend” at the Santa Maria Maggiore (located in Rome but it belongs to the Vatican), accompanied by the G. Rossini Orchestra Sinfonica. This version was composed by Seiji Endo, and the score was done by Shigeaki Saegusa.

During my time in Italy, Mr. Yokota became seriously ill and was confined to his bed, unable to speak. Upon my return to Japan, his wife Sakie took me aside and said: “He is seriously ill. He is not allowed visitors, not even you, Mimei. I’m sorry, but please try to understand.” I felt as if my heart was going to break, but I understood.

Mr. Yokota passed away without my ever getting a chance to see him again. Our efforts up to then had been helpless to sway world opinion.

But is this problem just to be swept under the rug?

Japanese government officials say, “We can’t get North Korea to meet with us.” But senior officials and representatives from North Korea were at the conference for the Olympics. In 2003, then-Prime Minister Koizumi sat at the same table with then-North Korean leader Kim Jong Il, and in one night convinced him to admit to the abductions and return of five abductees.

There are always ways of getting people to the negotiation table. You just have to play your cards right.

Despite the passing of Mr. Yokota, I will continue to sing and show my paintings to the world, hoping to share a glimpse of the road Mr. Yokota and his wife have tread for decades with hope for a solution to this problem. Directly after my concert in Italy, almost a hundred people approached me, saying they hadn’t been aware of this unbelievable crime and wanted to support getting to a solution. 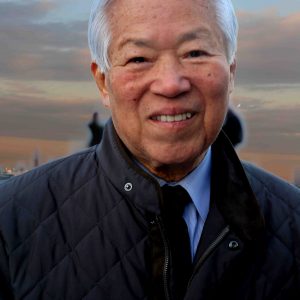 In Memory of Shigeru Yokota

Please don’t let the death of Mr. Yokota be in vain. To paraphrase the words of the great American journalist William Lloyd Garrison, we will not equivocate, we will not step aside, we will not give up, and we will be heard. Injustice is not indelible.