How One NPO Brings Back Smiles for Kids Who Survived the 3.11 Earthquake and Tsunami 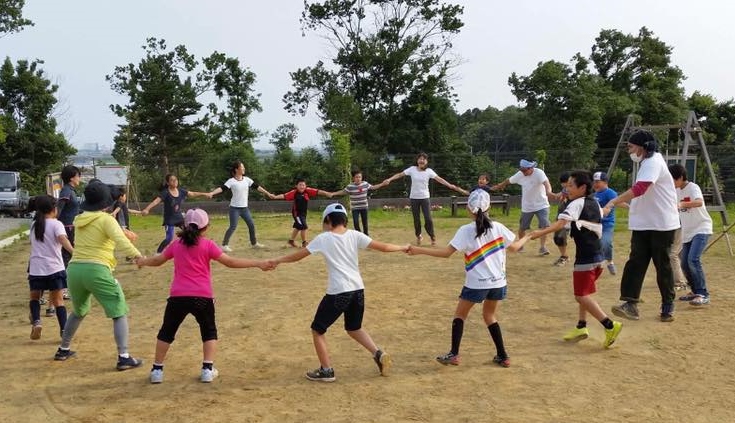 This article is a continuation of a series marking the 10th anniversary of the Great East Japan Earthquake. What happened on that fateful March 11, 2011? What has happened since then? What does the future hold? Here we share the thoughts of people from many walks of life about this unforgettable tragedy.

“We will continue doing what we are doing, even after ten years, even after twenty years, as long as there is even one child in distress.”

These are the words of Chiho Shimura, 54. She is the chief of Kokoro Smile, an NPO set up in Ishinomaki in 2012 which mainly provides mental health support to grief-stricken children and their parents in the aftermath of the Great East Japan Earthquake and tsunami triple disaster of 2011.

This year is the tenth anniversary of the earthquake. More than 15,000 people died and 2,000 are still unaccounted for from the tsunami that followed the magnitude 9 quake,

Ishinomaki saw the most losses of any municipal area, with more than 3,400 of its community confirmed dead, and over 400 still missing.

Where so much loss was suffered, it’s only human that wounds take longer to heal. And the topic of how to care for people in the area in the long term is still at the fore of conversation in Japan.

In the National Diet Session of March 8, Japanese Prime Minister Yoshihide Suga pledged continued support to the region in the area of mental health:

The Start of Kokoro Smile

As the earthquake struck at 2.46 PM on March 11 and the subsequent tsunami engulfed Ishinomaki, the city was brought to its knees, with devastating loss of life and infrastructure.

Chiho Shimura was born and bred in Tokyo, and had lived there until 2011. But she had relatives in Ishinomaki, and shortly after the disaster made the trip to see if everyone was alright. What she encountered led her to start helping.

Her acquaintances included many teachers, and Shimura quickly came face to face with what children were enduring during that time, beginning with the simple provision of food.

Shimura explained: “With the start of the new year (in April) Teachers were in tears because some children hadn’t eaten a proper hot plate of rice, or a good portion of vegetables in weeks. If school lunches were not available, what were these children going to eat?”

It was then that Shimura decided the best way she could serve would be in social work through an NPO. She cut through the red tape and managed to gather enough funds and resources to come up with 3,000 portions of school lunches for kids starting in May 2011, a mere two months after the earthquake.

It was while working with children that Shimura first came into contact with children who had suffered severe loss and were affected by Post Traumatic Stress Disorder (PTSD).

“After the earthquake, there were children that could not laugh, and could not go anywhere, and were very afraid.”

One volunteer  would go to where a child was staying to talk, listen, do art therapy, gain their trust, and then, if and when they were ready, take them outside to a park. It’s then that sometimes wonderful happened, Shimura explained.

“Before, even if kids did laugh, it was not a real laugh. Their eyes didn’t laugh. But when they were in the park, they were running and laughing for the first time, just as kids do.”

Shimura and her volunteers understood that it was not counseling itself that was necessary, but playing together, doing things together, and just being there.

That was where the grief program of the Kokoro Smile Project began. The NPO came into being months later, in 2012.

The Kokoro Smile Project now operates with 20 volunteers and five staff members, led by Chiho Shimura, who focus on elementary school kids in the Ishinomaki area. Their funds are largely thanks to SNS centered campaigns, company pledges, and project-based donations.

To a novice, it might sound odd that the approach proposed by Shimura does not include counseling, per se. When there are so many victims, a different approach can be more effective.

“We do a program every Sunday where everyone knows that the people there have all suffered trauma. That is the important part, there is a sense of sharing. And then, while doing other things, a child might say ‘Oh I wish that my mother was here,’ just out of nowhere. We need to be prepared whenever they want to talk about it. That way, the children don’t get hurt.”

Preventative art therapy is among the many activities run by the organization. Others include individual support, parental support, or support for kids who don’t attend school. There are also ad hoc events such as summer camps, or a project in collaboration with the Taylor Anderson Memorial Foundation, such as one in 2014 to bring a candy truck to the children.

Importantly, the NPO runs a 24-hour hotline for parents and children who are in distress. Shimura is responsible for the line aimed at parents. She explained that especially in the years following 2011, struggling parents would call at any hour of the day.

“There were times when the anniversary of 3.11 approached that I couldn’t put down the phone all day, and I couldn’t get any sleep,” recalled Shimura.

The falling trend of calls from parents seems to be offset by an increase in inquiries by children, especially through the messaging service called LINE.

As is perhaps indicated best in the numbers shared by Shimura, the care of children who have been affected by disaster is not something which becomes redundant after a few years.

“We have seen many episodes of children being afflicted with PTSD, even after 5 years,” said Shimura.

Ultimately, Shimura reflects on the unique nature of experiencing grief as a child, and why guidance is particularly important.

“Grief is not a sickness, so it can’t be cured. In addition, children experience grief multiple times when they grow up,” she pointed out.

“For example, take a child who lost his mother. When he is small, he might think that she might come back one day. But when he grows up, he realizes that people don’t come back. With age, grief changes, there is a different fear and sadness.”

Then of course, recent events can also reopen old wounds. Recently on February 13, an earthquake hit Miyagi and Fukushima. Experts said it was an aftershock of the 2011 megaquake.

Shimura explained how the episode has made some middle school children experience shock and uncontrollable crying, bringing flashbacks of 2011ーa time when they were just toddlers.

There are other cases of very young children who develop PTSD when they experience a strong earthquake for the first time, simply because of the sheer scariness of the stories heard from relatives and acquaintances about people dying in the tsunami.

“There was one boy who was afraid to go to school for two weeks, because he was afraid of a tsunami.”

Ultimately, Shimura encourages everyone, be it in Ishinomaki or around the world, to seek help from someone they trust to deal with losing someone they love.

“Grief is a natural response, so there will be someone who is there to support you. You don’t have to carry that weight on your own. Grief won’t go away, but until you can deal with it, you need someone to help.”

Finally, Shimura renewed her pledge to support every child in Ishinomaki, no matter how long it takes.

“Even children [eventually] get over the shock, and then go back to normal life. But there are still some who aren’t able to. We want to continue, for as long as there is even one single child who is struggling.

“The activities should change with the needs of society, but there are some things that need to stay. If we switch our focus, then who will take care of these kids?”

Kokoro Smile Project is an NPO based in Ishinomaki. It started in 2012. You can find more information about the organization on their web page, or on Facebook and Twitter.