Cherry Blossoms in Tokyo Off to a Blissfully Early Start 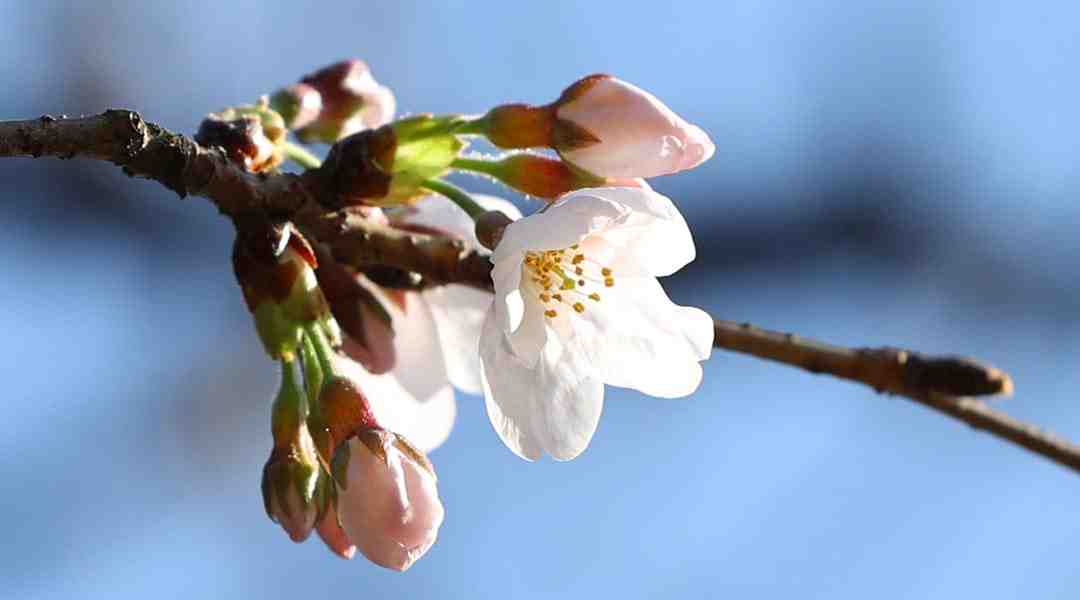 Cherry blossoms have arrived earlier than predicted in Tokyo, with the opening of the first buds at Yasukuni Shrine on March 14.

The news was announced after officials spotted five little flowers on the shrine’s Yoshino cherry trees, days ahead of their estimated opening date and twelve days earlier than a normal year. This premature opening ties with last year as the earliest in recorded history.

Flowering Begins Even Earlier than Predicted

This unseasonable usherance, the result of optimal weather conditions, has caused the Japan Meteorological Agency to bring forward the dates on their flowering forecast, giving locals a more accurate window for their much-anticipated cherry blossom viewing.

While the blossoms have just started to flower (kaika), it’s predicted they will reach full bloom (mankai) in about a week. This is the ideal time to see the fluffy strands of a weeping cherry sway in the breeze, or boughs laden with a pink cloud of petals.

The early-blooming trend is expected to continue across much of Japan, with Kyoto slated to flower on March 17, Osaka on the 20th and Sapporo on May 1. This follows the typical movement of the blooms from the southwest to the northeast of the nation.

The data collected by the Meteorological Agency focuses on the Somei Yoshino variety of cherry, the white flower with a pale pink hue, which is famous for its almost snow-like quality when the petals flutter in the wind.

In Tokyo, the ‘index’ Yoshino cherry is located at Yasukuni Shrine, which this year flowered 12 days earlier than the ‘normal’ date of March 25. As this is the ninth consecutive year that Tokyo has bloomed ahead of schedule, it’s likely the average flowering dates will be adjusted forward to keep up with the trend of earlier blooming. Yet another ‘new normal’ to come out of the COVID-19 pandemic.

Hanami is a beloved pastime in Japan. Wherever the trees are flowering, you will find corresponding crowds of people gathered to admire them. This can be done by strolling along a green pathway or tree-lined river, or more favorably, picnic style in a park in view of the blossoms.

This latter style is typically a crowded and lively affair, one that can stretch long into the night, illuminated by romantic lighting. As such, these kinds of celebrations have been discouraged during the COVID-19 pandemic, with many Sakura festivals canceled last year.

At Ueno Onshi Park, one of Tokyo’s most popular hanami spots, trees are expected to flower on March 16 and reach full bloom by March 24. As the flowering will occur during Tokyo’s current State of Emergency, currently set to end March 21, the popular practice of sitting on sheets under the trees while socializing with food and drink has been banned, and other events have been canceled.

While nature cannot be stopped, it seems that festivals can—and have been—in the interest of public safety.

Even though the food stalls won’t be set up and seating may be taped off to discourage gathering, it’s still possible to enjoy hanami safely on an outdoor stroll, following social distancing measures.

The cherry trees lining the Megurogawa stretch for around 4km and are a treat to witness even without the pink champagne or coloured foods from street vendors.

Perhaps this year, lone trees or local neighbourhood green-paths will be celebrated in favour of large public gatherings. Playing it safe this year is bound to make future hanami seasons all the sweeter.