How Trustworthy are Chinese Statistics? China Inflates GDP Figures by $478 Billion in 2017

The National Bureau of Statistics of China, based on its own independent analysis of the 2017 GDP data—reported as of February 3, 2018, by each of the 31 provincial governments—discovered that the preliminary total Chinese GDP reported on January 18 had been inflated by more than 2,976.9 billion yuan (about 52 trillion JPY, or 478 billion US dollars). Below is a report by the Sankei Shimbun further detailing this information.

It has long been suspected that local governments in China have padded their statistics. Under the leadership of Xi Jinping, a system for monitoring provincial statistics was established last year. Although its impact has been limited, the effect casted doubt upon the credibility of Chinese statistics overall.

The National Bureau of Statistics announced that the 2017 GDP for all of China (excluding Hong Kong and Macau) was 82.7 trillion yuan. This number is derived from the local GDP reports submitted by each of the regional governments. However, a collation of individual statistics from these regional governments, as reported by China Central Television (CCTV) and other sources, revealed a GDP figure 3.6% higher than announced by the central government.

The amount, by which the sum of local GDP figures exceeds the figure reported by the central government, is roughly equivalent to the economy of a local government the size of Shanghai (3.1 trillion yuan), which is ranked 11th among China’s provincial entities.

In April of last year, China strengthened its local monitoring system by establishing the Statistical Law Enforcement Supervision Bureau and, in September, the government issued “Regulations for Implementation of the Law on Statistics,” intended to enable punishment of statistics forgery. This was a serious effort to do something to stamp out the chronic padding and other distortions in Chinese financial data.

As a result, it was discovered, that industrial output and fiscal revenue data had been padded, one item after another, by the Inner Mongolia Autonomous Region and Tianjin City, requiring downward revision of their respective GDP figures. After adjustments for inflation, Inner Mongolia had a growth rate of 4.0% and Tianjin City a growth rate of 3.6%, both under the national average of 6.9%. In January of last year, Liaoning also admitted to intentional statistical forgery.

At the same time, 22 of China’s 31 provincial administrative entities reported that they exceeded the 2017 national growth rate of 6.9%, beginning with Guizhou at 10.2%, indicating a lack of consistency between the central government and local numbers. The largest single provincial entity, Guangdong (8.9 trillion yuan), reported a growth rate of just 7.5%.

Xi Jinping has enunciated a policy of shifting the calculation of economic growth from quantity to quality. However, because the central government has long evaluated local government officials on the basis of The National Bureau of Statistics of China, based on its own independent analysis of the 2017 GDP data—reported as of February 3, 2018, by each of the 31 provincial governments—it discovered that the preliminary total Chinese GDP reported on January 18 had been inflated by more than 2,976.9 billion yuan (about 52 trillion JPY, or 478 billion US dollars). A pattern of inflating statistics that reflects the traditional evaluation criteria has unquestionably taken hold in China. Yet another related problem is the well-established pattern of double-counting infrastructure and other projects.

The padding of statistics by regional governments became conspicuous in the latter part of the first decade of this century. In recent years, there was a continuing slow-down in Chinese economic growth, but in 2017 the reported growth rate of 6.9% exceeded that of the previous year, indicating that the economy is shifting in the direction of accelerated growth. It is still unclear, however, to what extent the 2017 projections take into account the need for correction of problematic regional data. 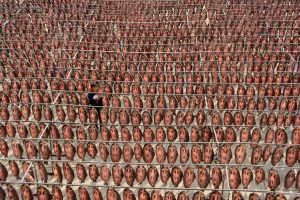