How will Biden Handle South Korea and China? 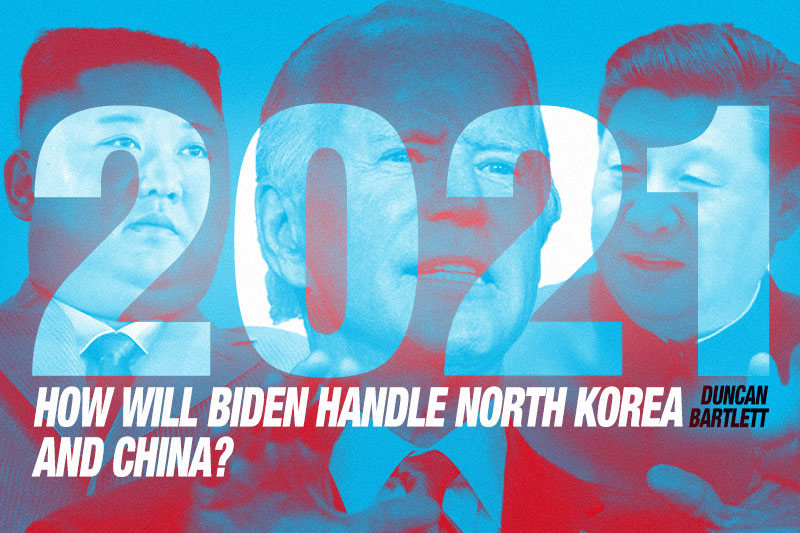 The next president of the United States understands that the world faces a dual crisis, created by the COVID-19 pandemic and by climate change.

He recognizes that these are problems which cannot be solved by any one country alone: they require a huge international effort.

Joe Biden therefore plans to gather up friends and allies, including Japan, and ask for their support.

I expect that Mr. Biden will welcome Prime Minister Yoshihide Suga as a VIP guest at a Summit for Democracy, which he plans to convene, following his inauguration.

The conference will almost certainly take place online, rather than in person, because of COVID-19. The most likely date is February 2021.

During his election campaign, Mr. Biden said the summit would help to “renew the spirit and shared purpose of the nations of the free world.”

The implication is that the U.S. will resume its place at the head of the table, while other democractic nations chip in with suggestions on how to support its plans, mindful of Mr. Biden’s foreign policy slogan: “America is back.”

I doubt that Mr. Suga will challenge this approach openly, although in private he will probably demand a number of concessions from the new president.

In return for Japan’s loyalty, Mr. Suga will expect an unequivocal commitment by President Biden to the U.S.-Japan alliance – the bedrock of Japan’s security policy – and a halt to the grumbling about the expense of “burden sharing”, which was a prominent feature of President Trump’s Twitter feed.

Personally, I feel it is unfortunate that Mr. Suga has not been elected as Japan’s Prime Minister, at least not yet. He took the job after being picked by senior Liberal Democratic Party politicians following Shinzo Abe’s resignation, in the summer of 2020.

Would not Mr. Suga have more legitimacy on the world stage if he had called a general election and invited the people of Japan to vote for him as their representative?

I do not envy the diplomatic team in Washington which has been asked to compile the guest list for the Summit for Democracy. As the editor of a magazine about Asian politics called Asain Affairs, I can see that Asia presents particular dilemmas.

Vietnam is a Communist country, yet it is taking sides with America against China. Should it therefore be invited? Cambodia, a Chinese ally, is currently complaining about pressure to use Chinese vaccines against coronavirus. Should its prime minister, Hun Sen, therefore be shown the red carpet, via Zoom?

And what about Taiwan’s President Tsai Ing-Wen, who has twice been elected as a national leader and a representative of the Democratic Progressive Party?

Despite a good relationship with Mr. Biden’s Democratic Party, China will be furious if President Tsai attends, as the PRC regards the island as a part of its sovereign territory.

I assume that an invitation to the event will be sent to South Korea’s President Moon Jae In. South Korea remains a U.S. ally, although there is a widespread view in Asia that it is moving ever more deeply into China’s sphere of influence.

As the meeting is being held online, Mr. Moon will not be required to shake hands with Mr. Suga, who is dismissive of a demand by the Supreme Court in Seoul that Japanese firms should be forced to pay compensation to Korea over historical disputes. Japan says such matters were settled long ago.

Mr. Moon tells his followers that reunification between North and South Korea is achievable within a generation, even though the North Koreans are currently refusing to speak to the South. They blew up the joint liaison office for inter-Korean dialogue in the summer of 2020.

There are also worrying signs that North Korea intends to show Mr. Biden it still regards America and Japan as enemies, either by firing a long-range missile, such as the one displayed at a military parade in Pyongyang recently, or by shooting more rockets into the Sea of Japan.

Then there is the issue of China.

China is not interested in watering down its Communist ideology to suit Mr. Biden, any more than it did for Mr. Trump. Nor does it expect a network of U.S. allies to thwart its ambitions for regional domination and increased global influence.

At present, Beijing’s propaganda focusses on patriotic pride and ideological purity. The Chinese Communist Party used its recent annual conference in Beijing to hail President Xi as the “core navigator at the helm”. It promised that China will “surely overcome all kinds of difficulties and hindrances on the road ahead” and expressed confidence in the superiority of the socialist system.

China and the United States agree that disease and climate change are pressing issues which require collective action. However, China expects to be regarded as the nation which is most respected for its work towards “the global public good”, as President Xi puts it.

China is distributing millions of doses of its COVID-19 vaccines to poorer countries, even though the formulas have not passed rigorous scientific safety tests. China is also the first major economy to recover from the economic impact of COVID, with 4.9 percent GDP growth posted for the third quarter of 2020, according to official figures.

President Xi has made some bold promises on climate change. He has announced that China will aim to hit peak emissions before 2030 and reach carbon neutrality by 2060.

Mr. Kerry and Mr. Biden need to ask themselves if China’s promises on climate policy are meaningful or trustworthy. They should also consider what concessions China might want in return for cooperation with the United States in this area.

Would it, for example, expect America to tolerate a Chinese invasion of Japan’s Senkaku islands? Or is China really aiming to prise the United States away from its key Indo-Pacific alliances with Japan and South Korea?

These are serious challenges for the incoming foreign policy teams in Washington. Many of the diplomats working with Biden have experience from the Obama years, when America took a so-called “pivot to Asia”.

Since then, China has grown much stronger and more assertive. It is confident that America’s allies do not pose much of a challenge, as they appear to be disorganized, economically weakened by the pandemic and distracted by competing national interests.

There is another deep problem with the Summit for Democracy. It is due to take place at a time when America’s reputation as a democracy is in tatters.

Donald Trump is still trying to rally his supporters to reject the outcome of a free and fair election. He is unlikely to officially concede defeat, even after Mr. Biden is sworn in as president.

Trump may even return to the political scene, full of fire and fury, when the next election cycle begins.

Duncan Barlett is a regular contributor to Japan Forward and runs the news portal Japan Story, which contains articles, podcasts and videos. From January 2021, he takes up a new role as the presenter of the China In Focus podcast, in association with the SOAS China Institute, University of London.  Find his pieces on JAPAN Forward here.