ICE HOCKEY | Japan Women Off to Winning Start Against Sweden 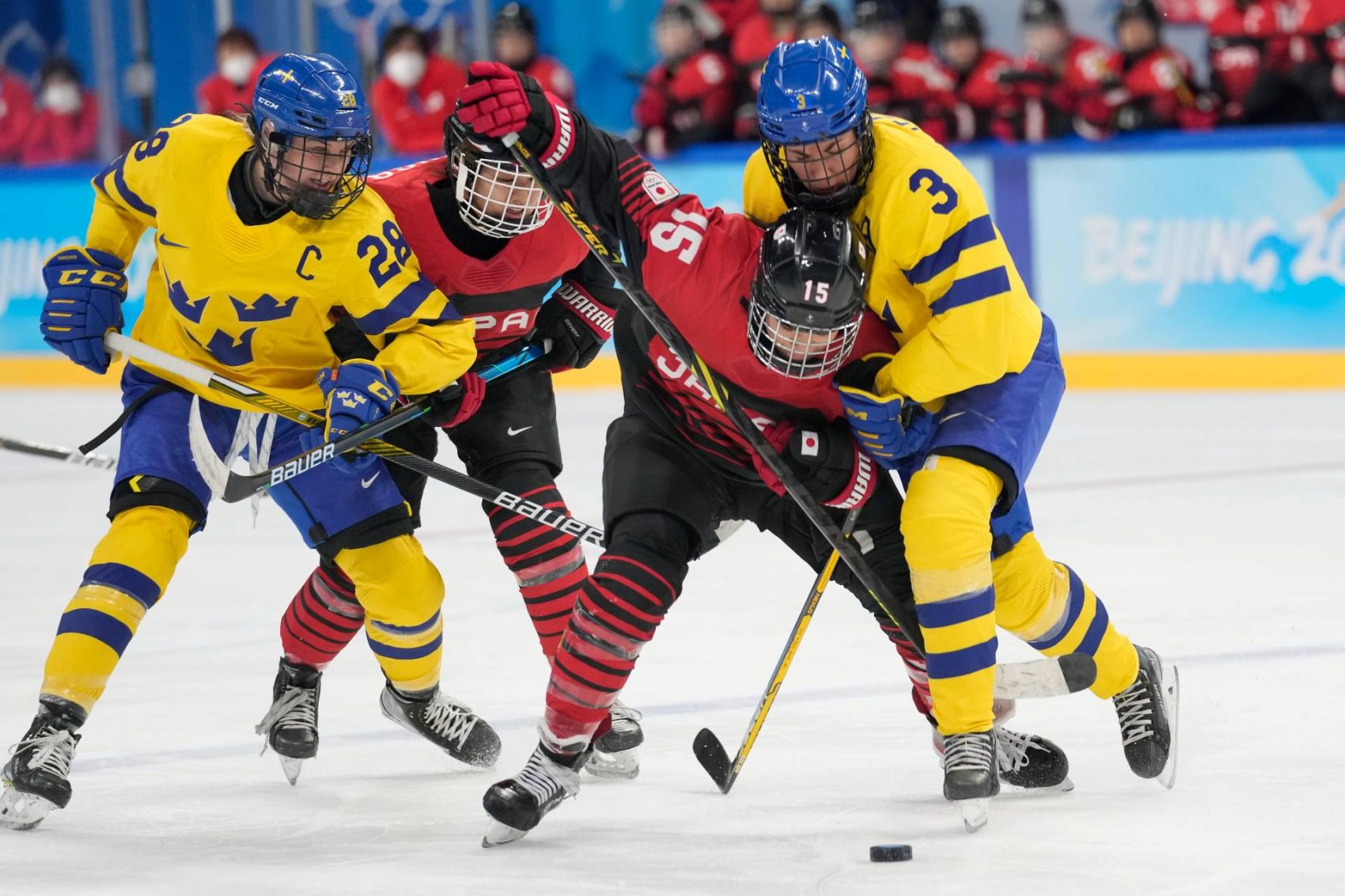 Japan's Rui Ukita (15) and Sweden's Anna Kjellbin (right) battle for the puck during a women's ice hockey Group B preliminary round game at the Beijing Olympics on February 3. (Petr David Josek/AP)

Japan’s national women’s team was all smiles after a convincing 3-1 win over Sweden in its opening game of the ice hockey tournament at the 2022 Beijing Winter Olympics on Thursday, February 3.

Shiori Koike put her team on the scoreboard with just 47 seconds left in the first period at Wukesong Sports Centre to set the tone for the Japanese team, nicknamed “Smile Japan.”

Left all alone in front of the net, the pint-sized Koike took a pass from Hanae Kubo and beat Sweden goaltender Emma Soderberg with a shot to the top corner on the glove-hand side.

Sweden equalized thirty seconds into the second period when defender Maja Nylen-Persson’s shot from the face-off circle somehow found its way under the arm of Japan goaltender Nana Fujimoto and trickled in over the goal line.

In a highly energetic showdown with few whistles, Japan dominated the chances and held a 25-9 edge over Sweden in shots midway through the second period.

“The first game is really important, so I’m glad we won,” Japan forward Chiho Osawa, the longtime team captain, was quoted as saying by Kyodo News. “As you can see from the number of shots, we were able to control play for long stretches.”

The best chance for Japan in the middle frame came when Haruka Toko rang a backhander off the post midway through the period.

Fujimoto wasn’t nearly as busy as Soderberg but the veteran, who was a member of Japan’s team at the Pyeongchang Olympics, came up big when she had to as Sweden pressed for a go-ahead goal.

Japan came out on the attack for the third and final period and was rewarded at the 4:03 mark.

Taking advantage of a Sweden turnover in the neutral zone, Akane Shiga made a nifty backhand pass to Rui Ukita at the Sweden blue line.

Ukita took a few strides to break free and fired a left-handed wrister over Soderberg’s blocker for the crucial go-ahead goal.

Japan did a superb job of holding the lead until the final minutes when Sweden pulled its goaltender.

With just over a minute left, Haruna Yoneyama put the icing on the cake with an empty-netter.

The final tally in shots was 40-27 in favor of Japan, which next faces Denmark on Saturday.

After the tournament opener for both teams, Sweden captain Michelle Lowenhielm expressed disappointment in the final score.

“I think we should have [won] this game and it sucks to lose. But I believe in this team and we’ll turn this around,” Lowenhielm said, according to Kyodo News.

Japan is even on three points with the Czech Republic in Group B. The Czechs beat host China 3-1 in an earlier game.

Gold-medal favorite Canada thrashed Switzerland 12-1 in a Group A preliminary round game.

Historically, Sweden has had a stronger team than Japan but things have been changing in recent years.

Japan’s women are currently seventh in the International Ice Hockey Federation’s rankings, one place ahead of Sweden.

For the first time, 10 teams are competing in the women’s tournament up from the usual eight.

The teams are split into two groups of five. Group A is defending champion the United States, world champion Canada, Finland, Switzerland and the Russian Olympic Committee.

Group B is Japan, China, Denmark, Sweden and the Czech Republic.

First Star: Shiori Koike. Koike’s first goal off a crisp wrist shot from the slot set the tone for Smile Japan and took the pressure off.

Second Star: Rui Ukita. Ukita’s go-ahead goal in the third came on a powerful wrister that Soderberg had no chance on.

Third Star: Nana Fujimoto. The veteran goaltender came through when she had to and stood tall against the persistent Swedes.